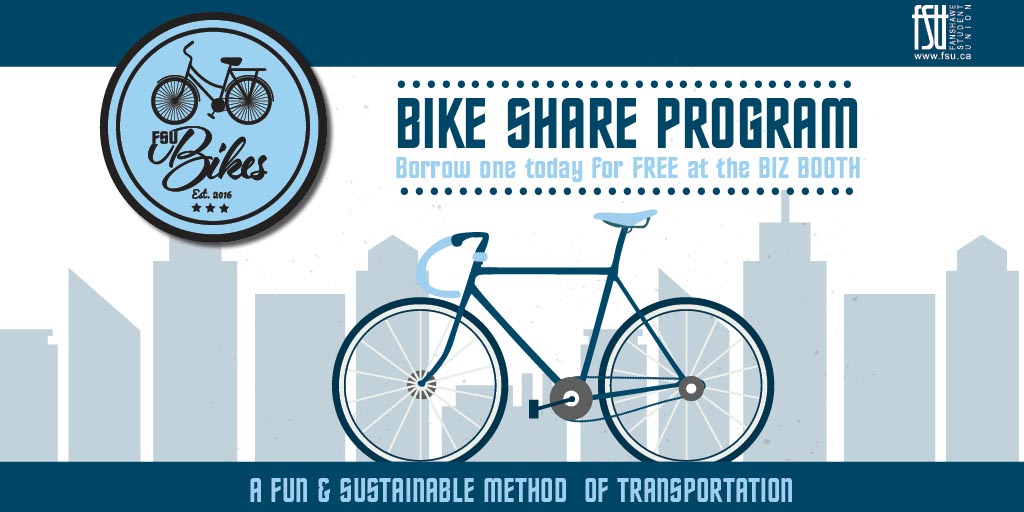 CREDIT: DESIGNED BY DEENA GRIFFIN
One of the things accomplished during Forsythe's presidency was FSU Bikes, a free bike-sharing program for students to use.

“You have set yourself up for this all year, you need to run for president.” These were the words that 2015-2016 Fanshawe Student Union (FSU) president, Alan Bushell said to me when I was considering running for pres­ident.

I was hesitant; I still had a year of school left to complete before I could even consid­er a role of this magnitude. I filled out two nomination packages, one for president and one for VP External and Academic Affairs, and tossed in the president package on the final day of the nomination period. I ended up running in the largest presidential election in FSU history against four other candidates and won in a landslide.

I’ve been in student government now for two years; I began as VP Finance in 2015- 2016 and was recently elected as Fanshawe College’s Board of Governors student repre­sentative for 2017-2018 (you won’t get rid of me that easily).

Prior to my experience in student govern­ment, I worked as receptionist at the FSU main office and in the Biz Booth, and I was also the president of the popular LGBTQ2+ club Spectrum Fanshawe.

The end of the school year, and the end of our terms, is both a sad and an exciting time. It’s a time of moving on for some and a time of stepping into new roles for others; it’s also a time to reflect on our accomplishments.

This year has been a historic year for the FSU, and as president, I feel confident that we have accomplished the majority of our goals. Here are some of the major highlights.

I’ll start with the most impactful, and the one I spent the first six months of my pres­idency on: complete governance restructure of the FSU, including a new by-law, which was voted in by students at large. The new structure includes a newly empowered board that is accountable to Fanshawe students, a president that is accountable to the board and co-ordinators who are hired and are account­able to the president.

With the assistance of FSU staff, I created FSU Bikes, a free bike-sharing program for students to use.

I was able to lead the board in terminating our membership with the College Student Al­liance (CSA).

The FSU, Fanshawe, Sodexo, Positive Space and Spectrum Fanshawe finally came together as a community to plan our presence at London Pride.

I garnered support to: a) install several rainbow crosswalks across the campus to promote diversity and b) create permanent installations of the Faceless Dolls Project for missing and murdered indigenous women.

As a team, we raised $500 in the summer semester for Keyano College in Fort Mc­Murray, which went directly into the hands of affected students and $1,700 in the fall semester for Habitat for Humanity Heartland Ontario. The Crohn’s and Colitis Foundation of Canada has been selected as the charity for the winter semester.

The executive council of 2016-2017 has been one of the best the FSU has ever seen, here are some of their highlights.

Jayme Dodge, although elected in October, slid into her position as VP External and Ac­ademic Affairs much like a baseball player would slide into home base without a second thought or any reservations. She has helped fill in various gaps in the team and has been on the front lines for student assistance.

Kimberley Francis, VP Athletics and Resi­dence Life, also elected in October, has been a strong advocate for students living in resi­dence and the Fanshawe Athletics program. Francis is an enthusiastic member of our team and has kept students’ spirits high with her Fanshawe Spirit Day.

Kevin Kaisar, VP Internal Affairs, suc­cessfully led various fundraising initiatives. He rewrote the FSU clubs policy, rewrote it again and then developed a policy manual and accompanying guidelines. He stepped outside of his comfort zone and planned two successful drag shows. Using his knowledge of special events planning, Kaisar gathered a team to create the FSU Charity Ball, Harry Potter and the Muggles Night Out.

Morganna Sampson, VP Entertainment and president-elect, has brought her much-need­ed youthful enthusiasm and unique perspec­tive to the team with Wellness Wishes, which granted 61 students’ wishes before the winter holidays.

Jahmoyia Smith, VP Finance, had large shoes to fill. She created her own brand of financial awareness weeks to raise financial literacy among students because you know, the mitochondria (the powerhouse of the cell) was so much more relevant in high school.

To conclude, I would like to thank every­one who made this year the best it could be: FSU staff, Executive Council 2016-2017, the advice of wise old Bushell, college partners and most importantly, the students. Thank you again for one of the best years of my life.
Editorial opinions or comments expressed in this online edition of Interrobang newspaper reflect the views of the writer and are not those of the Interrobang or the Fanshawe Student Union. The Interrobang is published weekly by the Fanshawe Student Union at 1001 Fanshawe College Blvd., P.O. Box 7005, London, Ontario, N5Y 5R6 and distributed through the Fanshawe College community. Letters to the editor are welcome. All letters are subject to editing and should be emailed. All letters must be accompanied by contact information. Letters can also be submitted online by clicking here.
Fanshawe Student Union

1
Class Representatives: There for you
2
Resources available at Fanshawe
3
Adopt-A-Student Family Campaign a success
4
Transitioning from high school to post-secondary education
5
Knowing the functions of your FSU

Reyno Rants: How to ace your exam