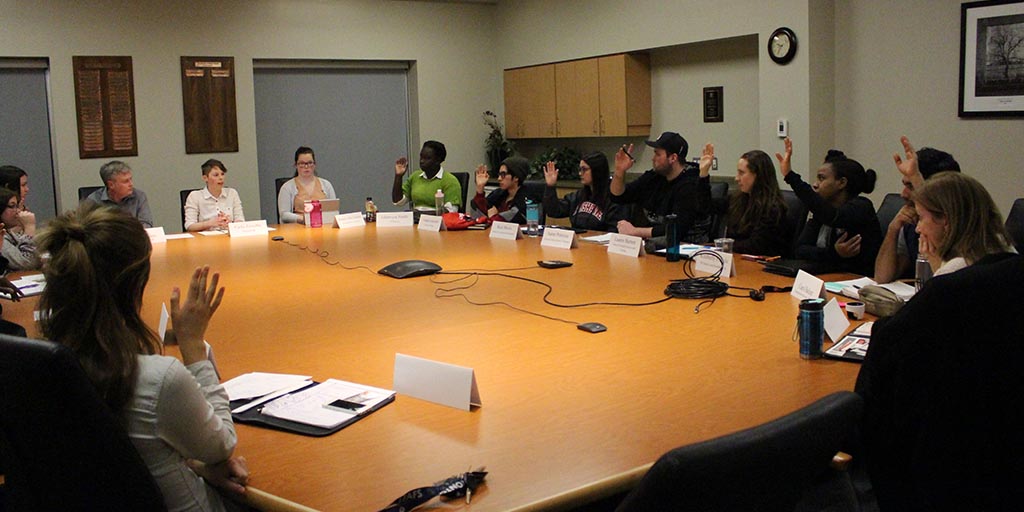 CREDIT: MELISSA NOVACASKA
On March 22, the five FSU executives and the SAC Board voted to terminate their membership with the CSA.

In a unanimous vote of 13-0, the Fanshawe Student Union (FSU) has made the decision to leave the Col­lege Student Alliance (CSA) after more than 20 years of membership.

The decision to leave is follow­ing suit of other colleges across Ontario as the membership with the CSA has changed from a service of lobbying for students’ rights in the government to a greater focus on professional development and train­ing of student leaders in key areas of importance, a change that was made in 2004.

“We believe they should go back to their roots and focus on lobbying in the government as well as provid­ing services to the student associa­tions who are members,” said Carlie Forsythe, president of the FSU.

According to Forsythe, this change was only one of the reasons the FSU voted to leave.

Another key reason was the use of the membership fees, which have gone from $3 per student to over $6 per student in recent years.

But it’s what the CSA does with that money that does not sit right with Forsythe.

Specifically, what Forsythe is re­ferring to are the Point Bank and the Leadership Scholarship.

“Before 2003, it was a $3 mem­bership and now it’s $6.12 and you get all this extraneous crap that you don’t even need like Point Bank is basically advertising on your own campus for CSA… you would get $1 per point and if you got over 200 points you would get a cheque…the only problem is that they take that out of our membership fees and give it back to us and they’re getting free marketing out of it.”

Another problem, according to Forsythe, is the representation of Ontario colleges within the CSA as they only represent 12 colleges out of 24.

“Out of that they actually have 16 student associations…12 colleges 16 votes…one vote per student as­sociation…it’s incredibly skewed to Northern colleges.”

The decision to leave the CSA has been one that has been in the works for over two presidencies, starting with Alan Bushell in the 2015-2016 year.

In May of 2016, once Forsythe took office, Fanshawe gave the first notice of termination from the CSA and was absent from the plenary that occurred just a week after the notice was given.

In July of 2016, the CSA paid the FSU a visit to discuss some con­cerns. Forsythe was open to talking and gave a detailed outline of what she needed to see in order for the FSU to stay part of the alliance.

Just three days after their visit, FSU executives had their first vote to terminate membership; the vote was unanimous.

In October of 2016, CSA paid another visit to the FSU to discuss further concerns and give them an update.

From November 2016 to Feb­ruary 2017, the FSU attended con­ferences, suggested changes and brought about three motions, most of which fell on deaf ears.

And on March 22, the FSU Board executes second vote to terminate membership and the vote was unan­imous.

“This has been a very long time coming,” Forsythe said. “This is the first [time] we actually had two presidents in a row who actually saw CSA for what it was and saw the fact that we weren’t getting pro­portional value or enough value out of the organization.”

During this meeting, CSA vid­eo-conferenced in for a 45-minute presentation trying to convince the FSU to stay, but the board still thought it was a better choice to leave.

“I think my board made the best decision that they could have made I have complete confidence in their decision,” Forsythe said. “I completely trust my board, mostly because they have been fully in­formed, they have both sides of the information and they still went with what is best for the students and what is best for the Fanshawe Stu­dent Union.”

In attendance at the meeting was incoming FSU president and current VP Entertainment, Morganna Samp­son, who agreed wholeheartedly in FSU’s decision to leave CSA.

“I feel like the vote and the de­cision was very logically decided,” Sampson said. “We honestly took a very long time to go through this process; we looked at all the facts and overall pulling out is going to allow us to advocate more for the students in a more municipal way while spending less money overall.”

As mentioned above, Fanshawe’s choice to leave is following suit be­hind other major colleges in Ontar­io.

“Something happened between 2011 and 2014 that pissed a lot of the big schools off and they just left…I don’t know what it is but I think it’s lack of transparency in documenta­tion…schools having been dropping membership like flies and it’s con­cerning,” Forsythe said.

And with the decision set in stone to leave the alliance, which was initially intended to defend the stu­dents in the government, Forsythe sees only benefits for the FSU.

“The main impact is the $90,000 that will be reallocated by the bud­get committee in the FSU, as well as you might see some really good, strong partnerships with other col­leges in Ontario…[we will] advo­cate for ourselves in the govern­ment.”

The collaboration with other col­leges who are not members of CSA is the direction Forsythe believes will work best for Fanshawe, it will be an alliance with no membership fee.

“It’ll much better to have students being the voice of students.”
Fanshawe Student Union