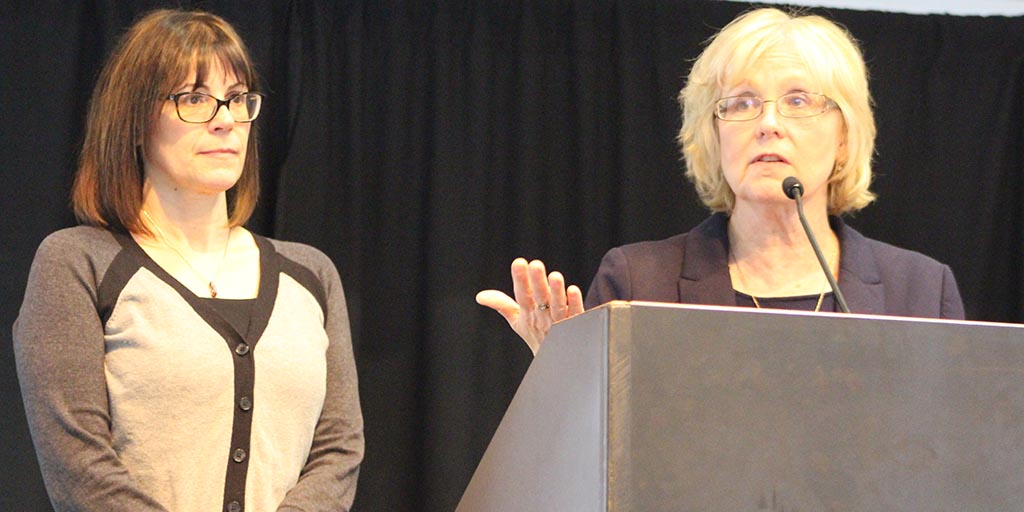 New Democratic Party (NDP) MPPs Peggy Sattler, for London West and Teresa Armstrong for London-Fanshawe region came to Fanshawe on March 14 to speak with students in a town hall meeting- style, about a variety of student- based issues.

Student debt was a major discussion factor on the agenda, including interest rates and high debt, though topics of internships, coop, mental health and the environment were other topics laid out on the floor.

Though the event was poorly attended, which might have to do with the lack of advertising and short notice of the town hall meeting, there was still strong discussion among students in Forwell hall.

Sattler who is also the post-secondary education critic for the Ontario NDP, said both her and Armstrong were on campus because they want to hear from students and their experiences with tuition and student debt.

“We are hearing more and more stories from young people who are going to post-secondary education and who are graduating with huge debt loads that are really delaying them from all of the kinds of things that one would hope for when one embarks on adult life,” Sattler said.

Sattler went on to say how students and graduates are having a difficult time to even move out of their parents’ house, something that most students plan on doing after graduation.

This was a topic also brought up by a student in the audience, who mentioned they are about to graduate from Fanshawe, but has done some post-secondary studying before coming to Fanshawe and plans to also continue more education in university in the future. The student also brought up the point that on top of wanting to have basic adult things, like living on their own, they already have a decent amount of student loans, and on top of wanting to continue education in the future they know they will have work beforehand to save for this expense and loans.

The topics of credit card debt and card venues “tricking” people, including students to get a card, even though this can at times hurt their credit and interest score.

Armstrong suggested students should speak with Fanshawe’s Financial Aid when it comes to finances, though contacting Sattler and herself for general inquiries is something students should do.

In terms of internships and coop, Sattler said she believes students should be paid for their services, and if they cannot be, then there needs to be a good enough reason why, such as earning course credits for their time.

“I really loved most of their points, especially the point about paid co-op or paid internships and placement, which is good for students because if you think about it, you’re working 40 hours a week unpaid and you can’t go to your other job if you have one, you have to be in class or do an online component and then you to take into account your mental health, where all that just comes down when you’re really stressed.”

Smith said she also liked the discussion about removing interest rate because even if it cannot be completely removed, if it can be reduced, it will help students. Smith said even thinking about credit cards and student loans is crazy and being an adult isn’t easy.

“I find that [the talk] was very informative, most of the students felt pleased, students that I spoke to are really happy with their responses.”

FSU president, Carlie Forsythe said she thought there was some good conversation that happened during the event, especially what students have noticed in terms of student debt.

“A lot of what we talked about today is very much mirrored in the conversation that VP Internal Kevin Kaisar and myself with Peggy on Friday, but it’s nice to sit down with government officials and kind of talk about what matters to students on a one-to-one basis,” Forsythe said.

According to Forsythe, she thinks it was important for students to show up to the town hall meeting, especially since there is an election looming.

“I think with elections coming up soon, I think it’s very important that students actually get a voice and get to say what they want and what they’re looking for because I think young people are the next generation that will come in provide [for change].”

During and after the talk, Sattler said there was an importance to get students’ voices and opinions heard because this way she can bring it back to the government and changes can potentially occur. Not all changes will happen, but at least getting their voices heard will matter.

“I thought it was really good, there weren’t as many students as maybe it would have been nice to have, but the students who were here were very engaged and gave really great feedback, not just about tuition or post-secondary education, but about a range of issues, which was really valuable and it shows that when policy makers are thinking about the priorities of young people, we have to think much more broadly then just post-secondary education,” Sattler said. “Young people are interested in a whole range of issues and we need student feedback, we need the feedback of young people on all of these topics.”
Debt NDP On Campus Events