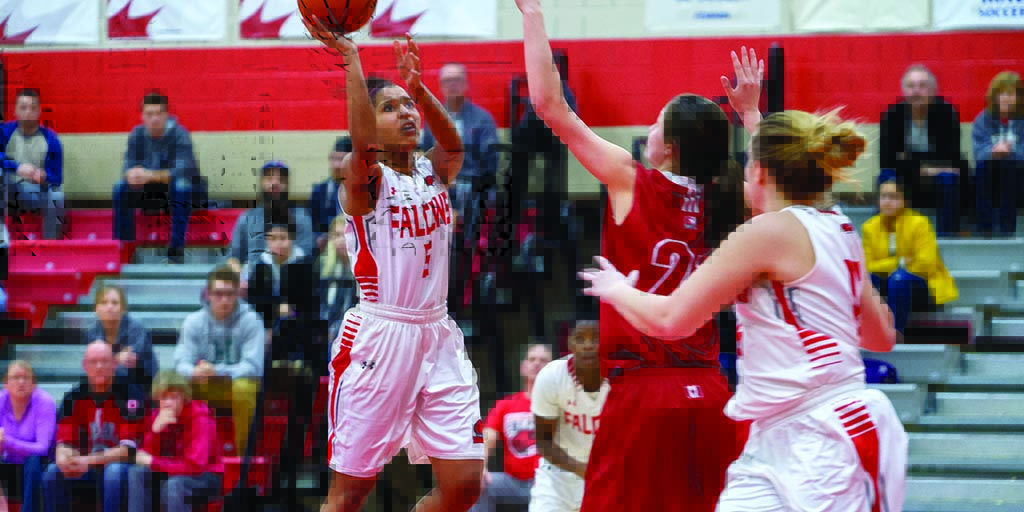 In just her second year with the Falcons, Mikhaila Wright has continuously proven her worth for the team.

According to Wright, she didn’t even realize how many points she was getting during the game, all she knew was that she was open, her teammates kept feeding her the ball and she kept sinking it.

“I was shocked,” Wright said. “I didn’t even think I was close to breaking a record I just thought it was a high scoring game for me.”

Wright may have been shocked, but head coach of the team, Bill Carriere, was not.

“It wasn’t a surprise to me that she broke the record, it was obviously gratifying for her and I’m happy for her.”

Originally from London, Wright has played basketball since she was in grade 8, a love inspired by being surrounded by the sport her entire life as her three older brothers played and her mother coached.

But it wasn’t until her victory lap of Sir Wilfrid Laurier Secondary School that Wright moved her skills into the competitive league.

“My friend [who went to the same school] said I should try out for the [London Ramblers] so I did and the coaches on the U19 team were really nice and they helped me out a lot and welcomed me to the team,” Wright said. “Good coaches made me want to stay playing basketball.”

From high school, Wright enrolled first at Carleton, studying psychology and practicing with their varsity basketball team. After a year, however, Wright realized the school and the distance wasn’t for her.

“It was just too far away, I missed my nephew, my mom, my brothers. I [also] can’t cook so I lost a bunch of weight.”

With the decision made to move home, Wright knew she wanted to study at Fanshawe and join their basketball team.

“I love it, the coaches are a family. Bill is the husband, Theresa is his wife [and the assistant coach] and then Nicole is their daughter [and the other assistant coach], they’re so family oriented and they make us one big family, I love and respect them so much.”

Carriere knew from the beginning that Wright was going to be an asset to the team.

“As a basketball player, my goodness, she’s so athletic, she’s [one of] the fastest on our team,” Carriere said. “She’s extremely athletic and when she starts shooting well look out.”

Now in both her second year of recreation and leisure services and with the team, Wright has made too many good memories to try and pick one.

“[I think] my best memory with the team would be getting bronze at the OCAAs last year. We were down most of the game and in the third and fourth quarter we brought it back to get bronze.”

Wright says that using the momentum from last year will only help the team in their mission of securing a gold this year.

Coming off such a strong previous season also helped Wright be at the top of the team in stats and break the two Fanshawe records.

“I think that I have worked hard to achieve that, my coaches believe in me, my teammates believe in me and just knowing that I feel like I can do anything.”

Wright is modest attributing her success to those around her.

“Without the team [and coaches] I don’t think I’d be as good as I am today; I wouldn’t love or respect the game as much as I do,” Wright said. “They changed the game for me.”
Athletics Basketball Fanshawe Falcons OCAA