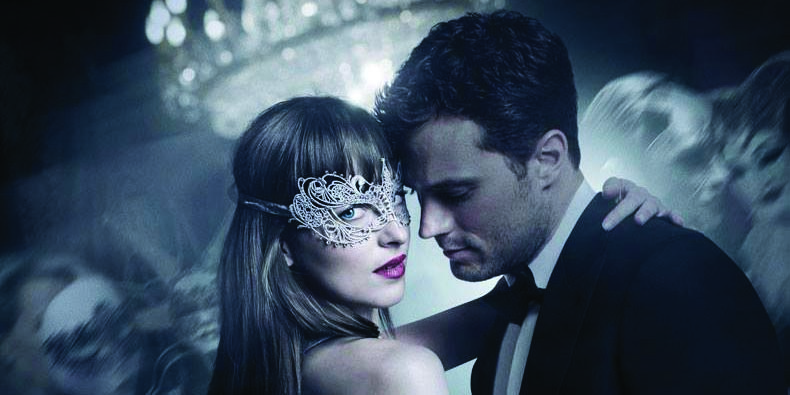 Steele is working at her new job as an editor. Her hot male boss is blatantly interested in her. She goes to her friend’s art gallery show and finds that he is exhibiting giant photos of her. Though she is embarrassed, someone buys all of them. It happens to be Grey.

Implausible, transparent, vain and vapid fantasy material for the brain dead masses. Grey asks her to have dinner with him. Steele seems like she doesn’t want anything to do with him, but immediately caves in anyways. Grey wants to try to make their relationship work again and though Steele insists that she doesn’t see how that could be possible, she immediately caves into Grey’s unconvincing vague pleas yet again.

The plot is unfocused and impossible to get invested in because everything that happens is either completely unbelievable or stifled by the characters being unrealistic, two dimensional and unlikable.

As the relationship develops, Grey’s troubled past is explored and a series of random dramatic subplots transpire because something has to happen.

The romantic aspect of this film is a complete failure. Steele talks vaguely about what they have together and how special it is, while Grey displays no desirable qualities. The relationship is based on nothing, with neither having anything to offer the other.

Grey is never anything but controlling, possessive overbearing and moody. He attempts to control Steele’s life in extreme and unacceptable ways that she half-heartedly objects to with mild annoyance until Grey changes the subject.

The two don’t seem to have a single common interest and barely even connect sexually. Grey clearly has a preference for domination.

Steele is curious about Grey’s preference, but goes back and forth, asserting that she can’t give Grey the submission he wants one moment, then teasing him to engage in kinky activities the next.

The characters are completely unrealistic and unrealized with confused motivations that change depending on what the movie needs dramatically, at a given moment.

The portrayal of sadomasochism in Fifty Shades Darker is depressing and stupid, treating the sexual preference like an exotic zoo animal.

When Steele and Grey are discussing getting back together, Steele cites the fact that Grey was sexually pleased by her experiencing pain as a deal breaker and the cause of their breakup.

According to Merriam-Webster, the definition of sadomasochism is “the derivation of sexual gratification from the infliction of physical pain or humiliation either on another person or on oneself.”

Steele experiencing pain for the purpose of Grey’s sexual pleasure would have been the point of the activities they were engaging in, which suggests a failure in communication. It implies that actual pain in such arrangements is unacceptable and the practice is rather about using kinky toys to spice up your sex life.

Grey comes from a broken home with drug addicted, abusive parents. He has thick manila folders with detailed documents and photos about every submissive he’s ever been. The implication seems to be that anyone with a preference for sadomasochism must be severely disturbed from trauma.

The aesthetic of the movie is intentional and fully realized, but the intention feels so calculated and pandering that it just comes off as pretentious.

The cinematography is stylish. Luxurious settings reflect a feeling of hedonism and minimalism. A lot of the time, the focus and action is happening to the left or right of the screen which helps give the movie an original look, creates a feeling of spaciousness and allows the viewer to take in the scenery.

Wreckord Reviews: What's LøVë got to do with it? Aaron who?