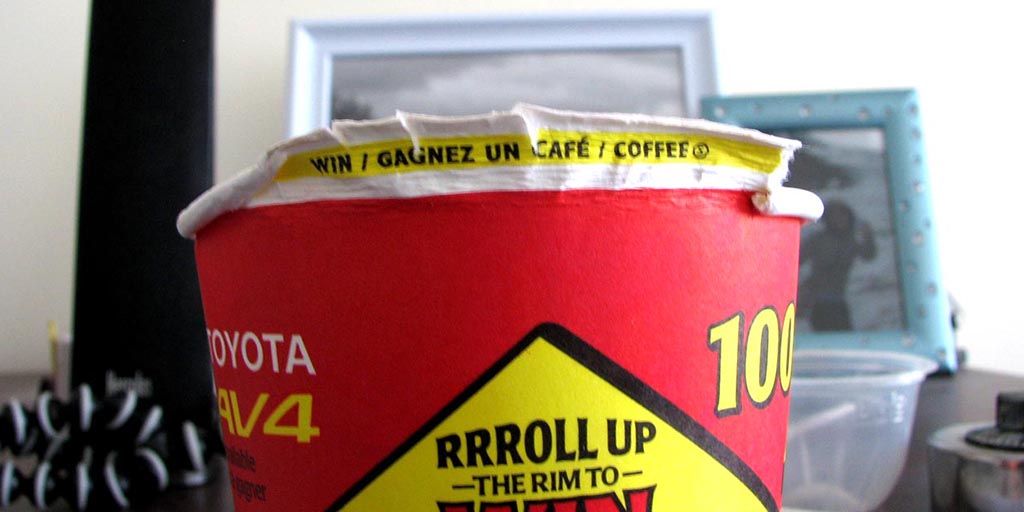 CREDIT: MICHAEL KWAN ON FLICKR (CC BYNC- ND 2.0)
Sometimes, even small cups can be big winners in Roll Up the Rim.

For third year marketing student Rachel Thorburn, Roll Up the Rim season has always been a favourite. “It makes what would be a miserable time much more pleasant.”

This year sees the return of Canada’s biggest coffee contest, with over $75 million in prizes available. For Thorburn, the contest is a great way to spend less money on coffee and other treats. “The chances [of winning] seem fairly likely, it feels like at least one in three that you’re going to win something. It’s probably just a coffee or a doughnut but you’re basically buying two things in one.”

A Tim Hortons press release confirmed Canada’s excitement about the event. “This year’s RRRoll Up the Rim to Win will be bigger than ever with millions more prizes to be won,” said Sami Siddiqui, president of Tim Hortons Canada. “The return of Canada’s favourite contest is our way of kicking off the celebration of Canada’s 150th birthday, and be sure to stay tuned because it’s just the beginning.”

The contest enters its 31st year, making it popular with both customers and profit margins.

But is there a smarter way to play the game and win? Theories surround the relation between cup size and chance of winning.

Tim Hortons disproved the theory, saying the odds were one in six for winning a food prize no matter the size. For once, size doesn’t matter.

But there might be other ways to make your chances of winning more likely.

“In first year, they opened a new Tim Hortons and we were pretty sure it was stacked. All my roommates won so much; it was all coffee and doughnuts though. One of them won three times in a row, she had a streak going,” Thorburn said.

In fact, your area does control the number of prize-winning cups, though it officially goes a bit broader than individual locations. Based on 2011 census by StatsCan, Ontario has the highest number of prizes available at just over 150 million, though you’re competing with about 13 million other Ontarians, averaging to about 12 winning cups per person.

While that number may seem high, Eastern Canada has it the best. According to the same census, they have about 30 million winning cups, though because of the lower number of residents, it averages out to 14 cups per person.

If you want to play it smart and win as much as possible, Thorburn recommended scoping out certain locations. “I think you should keep an eye out and if people seem to be winning more at one spot, it’s possible. I don’t think they would evenly count them out before they distribute them, so some have to be stacked.”
Tim Hortons