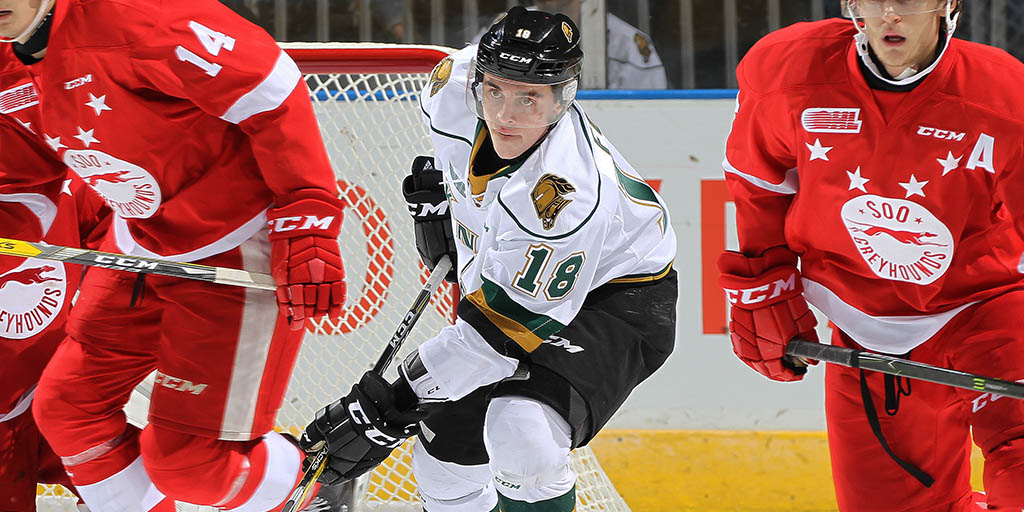 CREDIT: CLAUS ANDERSON OF GETTY IMAGES
London's first round pick in the 2016 entry draft, Liam Foudy, is one of the rookies to keep your eye on this season.

NHL training camps are well underway, and quite a few London Knights are still fighting for spots at the highest level.

While a testament to the skill London has developed over the last few seasons, there are spots on the roster that need to be filled. Luckily, the young guns are stepping up.

Of the eight rookies on the Knights’ roster Sept. 31 against the Sault Ste. Marie Greyhounds, seven were in the line-up. Considering the depth up and down the chart, it’s an impressive stat.

Also impressive was the line of 2015 draft picks Alex Formenton, Robert Thomas and Cole Tymkin. While Thomas isn’t considered a rookie, all three were born in ‘99, and are seeing their first real taste of Ontario Hockey League (OHL) action this year.

Cole Tymkin played for the Thunder Bay Kings last season, averaging over a point per game and being selected in the fifth round by the Knights last year.

Tymkin has played big minutes for the Knights in the early going, and even scored the game-winning goal in the home opener against Erie. The way he’s playing, he won’t be going anywhere.

Alex Formenton makes the jump from Junior A in Aurora, where he tallied 84 points in his 127 games as a Tiger. He also scored his first OHL goal last week in Barrie, as the Knights downed the Colts 3-1.

A second round pick in the 2015 entry draft, Robert Thomas centres the line. He led the York Lions in scoring last season, racking up an impressive 45 points in 34 games played.

He’s another player that should be on the final roster when all is said and done.

The current third line of the Knights is clearly looking to make a name for itself this year, after noticeable chemistry through the first four games.

Two rookie defenseman are also looking to make their home in London this season. Ian Blacker and Jacob Golden are also 2015 draft picks of the Knights.

Golden was set to play at Harvard University before being picked up by the Knights at the start of this season. The puck-moving defenseman played with the Upper Canada College Blues last year, and now enters his NHL draft year.

The Knights got lucky with Ian Blacker, who’s draft ranking fell after he announced his intentions to play for the University of Western Michigan. When plans changed, London was able to snag him in the fourth round of the draft. The 6’3 defenseman played for his hometown Oakville Blades last season.

There’s a real possibility that neither of the promising d-men have a spot in London once the roster is finalized, but if Olli Juolevi stays in Vancouver, there could be room. Either way, both Golden and Blacker have promising careers ahead of them.

And we can’t forget London’s first round pick in the 2016 entry draft. Liam Foudy could be a household name in London before his time in the OHL is done. The 16-year-old Scarborough native was taken 18th overall, and tallied three points in four preseason games. It could be a while before Foudy really breaks out, but he’s a player that needs to be considered, whether he makes the final roster or not.

Although many of the young guns currently playing on a day-today basis will likely find themselves without a spot come the end of October, London’s rookie core is making a mark early in the season.

There will come a time, whether this season or next, that the Knights players who led the charge to a second Memorial Cup will be regulars in the NHL. And at that time, today’s rookies will become tomorrow’s veterans.

If the first few games are any indication, the franchise is in good hands.
London Knights NHL OHL