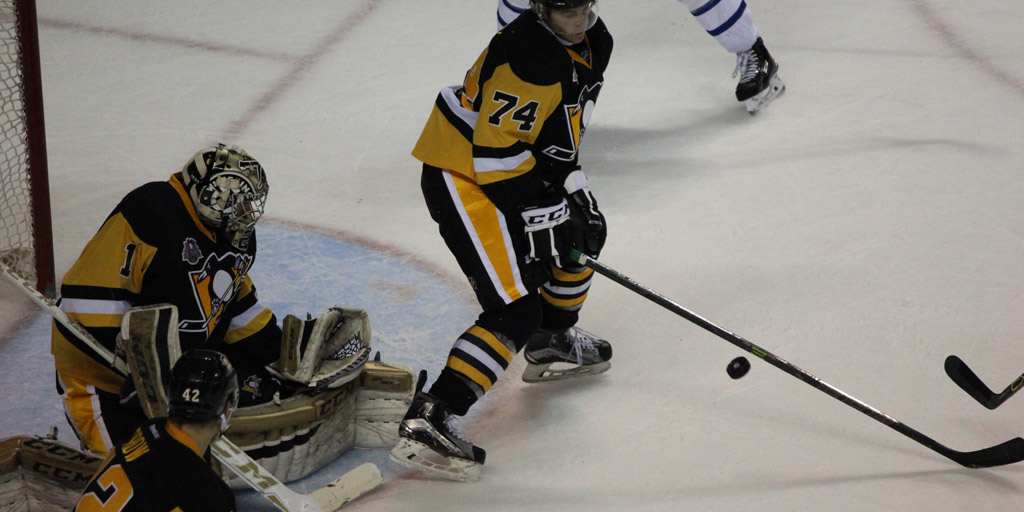 This year’s Rookie Tournament included six London Knights players, who all proved they could play at this level.

This was the fifth time Budweiser Gardens has been the host of the tournament since 2010.

The six Knights players were divided amongst the teams with the Montreal Canadiens gaining one, Victor Mete.

Mete was acquired in the 2016 NHL draft pick for the Montreal Canadiens, as the third pick in the fourth round. He was the 100th pick overall.

He had 38 game points in the OHL last season with the Knights, with eight goals and 30 assists.

During the rookie tournament, Mete got two assists in the game against the Toronto Maple Leafs.

He received no penalties throughout the entire tournament.

When playing against his fellow London Knights team members, Mete gave nothing but praise.

“Obviously playing against Marner and Mattinen, I obviously know what they’re about and everything, I know Marner is a great player and so is Mattinen, so I just kind of go out there and take the body on them really.”

Mete’s goal for the entire year is simple. “Just play my best every game and that’s really it,” he said.

Another team in the tournament was the Toronto Maple Leafs who had three Knights flaunting blue, Mitch Marner, JJ Piccinich and Nicolas Mattinen.

Marner was drafted fourth overall by the Leafs in the 2015 NHL Entry draft. He led the OHL in the 2015- 2016 playoff season with 28 assists and had 44 total playoff points.

Marner held true to the hype and proved he was right where he belongs over the course of the tournament.

His other accomplishments also include being named the 2015-2016 Canadian Hockey League (CHL), OHL MVP, OHL playoffs MVP and OHL All- Star Team, among other titles.

Piccinich was drafted to the Leafs being the 103rd pick overall in the fourth round of the 2014 NHL Entry Draft.

Piccinich also played quite well, even showing his offensive play with a penalty in the last game of the tournament against Pittsburgh.

Piccinich said it is a huge honour for him to be able to wear the Leafs’ jersey during this tournament.

“[With] the Leafs being Canada’s team, it was nice to be here in London in a familiar area. It was a good feeling,” he said.

Piccinich said he thought overall he played well in this year’s tournament, even though things were being thrown at him and the rest of the players systematically.

“You try to take your own game and fuse it into the Leafs’ system and it’s kind of a challenge individually and you know a lot of us in the room are really trying to fuse it and it was good to see we come out with three wins and it’s a huge sign of success to come,” Piccinich said.

Though some of his fellow Knights players were on a different team from his, Piccinich said it was still nice to see them on the other end [of the rink].

“They have their own games that they play and you notice it when they’re playing well,” he said.

Piccinich also mentioned how it was a little different to be playing against fellow Knights instead of playing with them.

In terms of stress level throughout the tournament, Piccinich said he wasn’t too stressed out on the rink.

“You’re playing with a bunch of new guys, and a new system and you just try to play your game and that’s really what they’re looking for,” Piccinich said. “The chemistry isn’t always there with your line mates, and sometimes there is a right way and it’s one of those things where you just have to play your game and do what the coach asks of you.”

Mattinen was the youngest player in the Rookie Tournament.

He was the 179th pick overall in the 2016 NHL Entry Draft and appeared in 39 regular season games with the London Knights, collecting 10 points that including four goals, six assists.

He has also obtained 48 penalty minutes.

During the 2014-2015 season, Mattinen was named to the Central Canadian Hockey League (CCHL) All Rookie Team.

During the first game of this year’s Rookie Tournament, which was against Ottawa, Mattinen was chosen to be in the starting line.

J.J gained a spot on the score sheet with an assist in the third game against the Penguins.

Crawley started the Rookie Tournament off with two penalties in the game against Montreal.

He was brought to this tournament on an amateur try out, and has never been drafted as of yet.

Crawley said it’s awesome when it comes to playing with another Knights player during the Rookie Tournament.

“We played together for three years now, so it’s nice to have that level of comfort on the team to hang out with, and understand what’s going on,” Crawley said.

He also said Yakimowicz definitely brings a good dynamic to the team.

Yakimowicz was also invited to the Rookie Tournament on an amateur try out and ended up playing like he deserved to be there.

He scored a goal in the final game of the tournament, which happened to be against the Leafs.

He is an aggressive player, and ended up having 117 penalty minutes during the 2015-2016 OHL season with the Knights. That clocked in at fifth for the season in the OHL.

The St. Louis Blues drafted him in round six of the 2014 season, and he was the 172nd pick overall.

While playing in the tournament, Yakimowicz had some thoughts about playing against and with fellow Knights players.

“It’s awesome, I love playing that, there’s a bunch of the boys on all the teams, so it’s nice to see them and it’s nice to play with (Crawley) too,” he said.

In terms of his goal for the season, Yakimowicz said he just wants to “play my game and play well and hope for the best.”

Although the Knights may not have appeared on the score sheet frequently, they were easy to spot on the ice, bringing speed and a sense of awareness. It was evident that the Knights’ players were right at home during the Rookie Tournament.
Budweiser Gardens Hockey London Knights NHL

1
What to expect from sports in 2021
2
New Year's Eve hockey: Canada's top tradition
3
Broadway in London brings professional theatre to Budweiser Gardens
4
What is the future of women's hockey?
5
The Hockey Canada scandal shows why hockey culture needs to change

Motoring: Jaguar makes a splash in the CUV market