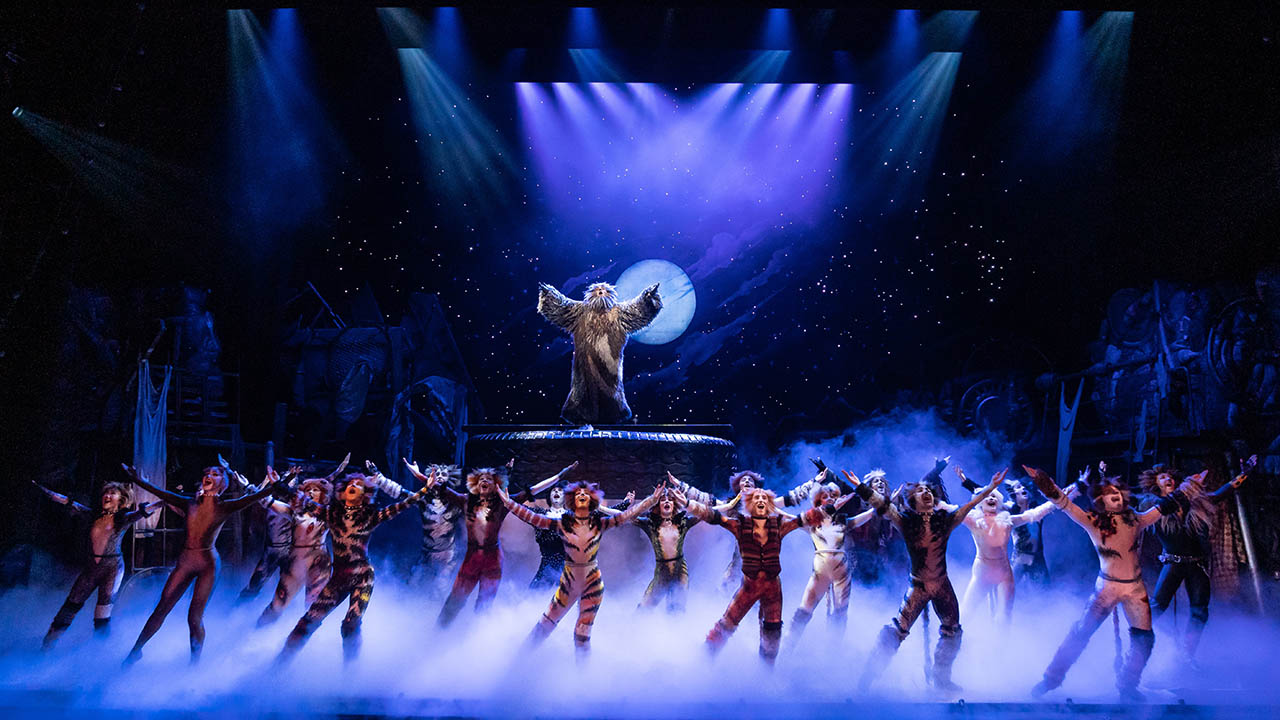 CREDIT: MATTHEW MURPHY
The cast and crew of Cats brought this weird and wonderful musical to life at London's Budweiser Gardens.

When Cats first debuted in London, UK’s West End over 40 years ago, I doubt Andrew Lloyd Webber ever imagined it would one day make its way to London, Ont., in a venue more accustomed to hockey games and rock concerts.

But in many ways, Cats is something of a rock concert. A bizarre spectacle of a musical, with big hair and lycra suits, flashy make-up and awe-inspiring lighting. Even if you struggle to grasp what the hell is going on in this show, it’s impossible not to be hypnotized by the spellbinding choreography and heart-stopping music.

That was very much my experience when I saw Cats’ opening night at Budweiser Gardens on Nov. 30. The production was directed by Trevor Nunn and choreographed by Gillian Lyne with updates by Andy Blankenbuehler. Budweiser Gardens was completely transformed to accommodate the production, with only a small section of the 9,100 capacity venue being utilized.

As a fan of musical theatre, I’m quite familiar with Cats’...whole thing. In case you’re not, here’s the story:

Based on a series of poems written by T.S. Eliot, Cats tells the story of a group of Jellicle Cats (what’s a Jellicle Cat? Don’t worry about it), competing in the Jellicle Ball with the hope of being selected by Old Deuteronomy (Cameron Shutza) to ascend to the Heaviside Layer. Each cat performs a musical number as a sort of campaign to prove why they should be the one chosen to begin a new life (or something).

Throughout these musical numbers, we also meet Grizabella (Tayler Harris), a glamour cat previously shunned from the group for reasons unknown. Eventually, Grizabella is able to state her case effectively enough to be chosen by Old Deutoronomy for ascension.

And that’s Cats. It’s weird, it’s wonderful, and its legacy, for better or for worse, is cat-scratched in stone. The production put on at Budweiser Gardens was brilliant in its execution, with a strong cast of dancers and standout performances by Hank Santos as the Rum Tum Tugger (forever a crowd favourite) as well as Shutza. Yuka Notsuka as Victoria was also a highlight, and Brian Craig Nelson and Taryn Smithson shone together for their duet as Mungojerrie and Rumpleteazer (a number I generally find rather forgettable).

Of course, many in the audience would have been eagerly waiting to hear the show’s standout song, “Memory” and the aforementioned Harris did not disappoint. The emotional peak of the otherwise plotless musical, “Memory” was a shining moment for Harris.

For me, the Jellicle Ball towards the end of Act One will be what sticks with me the most. Cats, more than most modern musicals, uses dance as a language, demanding so much storytelling from its dancers through the touch of a hand (paw?) or the subtle lifting of a leg. To catch these moments in Cats is to get the most out of the show, and the Jellicle Ball sequence calls on the audience to notice these minute details. But even if you can’t spot them all, the spectacle of watching upwards of 30 dancers perfectly execute such iconic choreography is something to behold.

Cats’ run was short, only staying two nights in London (Nov. 30 to Dec. 1), but Broadway-lovers can look forward to future productions at Budweiser Gardens in 2023. Catch the Book of Mormon from March 20, 2023 to 22, 2023, and Legally Blonde the Musical for a one time performance on May 7, 2023. Tickets can be purchased at budweisergardens.com.
Broadway Budweiser Gardens London events Musicals Theatre

Elf The Musical spreads cheer at the Grand Theatre this season