The historical game of thrones 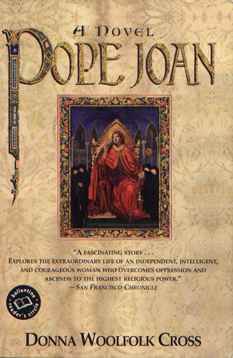 In scintillating and historically accurate detail, Donna Woolfolk Cross tells the legendary tale of the only female pope.


For thousands of years, scholarly and religious men have denied her existence. And yet, hard proof of her life endures more than that of King Arthur. I’m talking, of course, about the medieval legend of Joan Anglicus, also known as Pope John VII.

Reputed to have reigned over Rome for two years sometime between the ninth and 12th centuries, all Joan had to do to rise through the church’s ranks and achieve the era’s highest authority was pretend to be a man. Had she not given birth in public, the ruse may have lasted for an indeterminable length of time, and one can only speculate how her extended presence may have altered the Catholic Church to this day.

As it turns out, a man giving birth in public simply doesn’t go ignored by his peers, and Joan was either sentenced to death or died shortly after from complications. Her successor immediately expunged as much as he could from public record, but her name nevertheless spread through song and lore.

To ensure that no other woman dared to assume such heights of power, the medieval consecration ceremony implemented a “chair” examination. Before any new pope could be officially sworn in, he sat in a chair with a hole in the seat, and a fellow cardinal would reach up to confirm that indeed, the pope was male. The examination was a part of the ceremony for nearly 600 years, and the chair still sits on display in Rome.

In the novel Pope Joan, Donna Woolfolk Cross weaves a tapestry of deeply researched historical evidence with exhilarating elements of adventure to properly tell the overlooked story. Those who shunned their Sunday school lessons clearly missed out; church history contains as much sex, violence and political intrigue the likes of which would make any Game of Thrones novel seem like a bedtime story.

The fictional components of the book first introduce Joan as the daughter of a village priest in Germany. While her father is originally a Christian missionary from England, her mother is of the “heathen” Saxon descent. Being the only daughter in the family, Joan is thereby exposed to both her father’s strict Christian doctrine and, in secret, her mother’s pagan culture.

This sets the precedent for the remainder of the novel. In her thirst for knowledge, Joan absorbs all that she can from before and after the establishment of the institutional church.

She is taught to read the Bible by her older brother; a compassionate tutor later instructs her to read Greek poetry. Influenced by a multitude of voices, Joan ultimately derives her own personal system of faith and reasoning, and refuses to be restrained by the bounds laid upon her gender.

Cross’s speculation of how a poor, medieval rural girl could possibly become the most powerful figure aside from the Emperor draws interesting parallels to certain limitations that still hinder women in leadership. Overall the author poses the question, what is the merit behind gender overshadowing ability? Shouldn’t the appointment of a task be allotted to the person most capable?

While the modern Catholic Church has come a long way since the Dark Ages, Pope Joan is a novel that both informs and provokes thought about how much further it has yet to go.