One step forward, two steps back 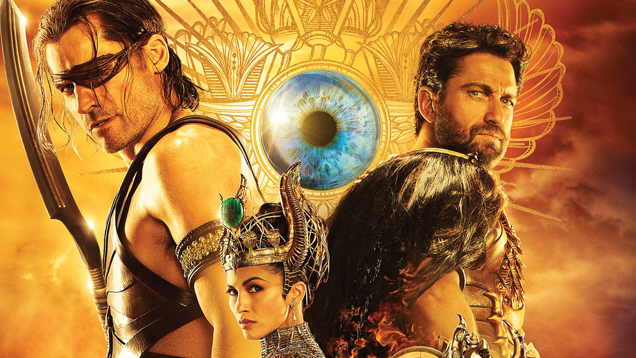 Credit: LIONSGATE (2016)
Pretty and pointless, Gods of Egypt fails to take advantage of a rich mythology.

It’s Ancient Egypt and the Gods walk among us. Following the plot of The Lion King, and any number of other similar films that take from Shakespeare’s Hamlet, the young god Horus must take back his father’s throne after it is usurped by his father’s murderer, Set. Helping him is a plucky young thief who is, in many ways, identical to Aladdin because ripping off one Disney movie was simply not enough.

Perhaps the most remarkable part of Gods of Egypt is the ridiculous number of well-known actors who take part in this loose reinterpretation of Egyptian mythology. Nikolaj Coster-Waldau, of Game of Thrones fame, plays a Horus who is remarkably similar to his character in Game of Thrones. Gerard Butler attempts to recreate his Spartan days as the evil god Set, and Geoffrey Rush spends yet another movie almost entirely on a boat.

There’s something you may have noticed about all these actors. While they are big names, they are also white. It’s true that the cast does have some small diversity, Toth being played by the incredibly entertaining Chadwick Boseman and Hathor by the remarkable Elodie Yung, however none of these actors are Egyptian. The depressing part is how much of a relief it is to see literally any diversity in a movie like this.

Now, there are a lot of other problems with this movie, from the ridiculously over-the-top CG to the idea that a human could be tossed across the room by a god with no resulting injuries or internal bleeding. That said, there are a couple of things Gods of Egypt does well.

There are a lot of nods to Egyptian mythology, although the main storyline is heavily modified to make Horus look good and remove all the incest and man-on-man action (after all, homosexual references are only okay if it’s a woman making them, right?). So instead of Set seducing Horus and then Horus tricking Set into eating his sperm, we get a long adventure that’s been whitewashed and forced to conform to Western gender stereotypes.

However, the Nine Gates of the Egyptian afterlife are mentioned along with the weighing of one’s soul against a feather, as is Ra’s constant battle against Chaos on the other side of the world. The humour ranges from dry to slapstick in a way that makes the entire production feel silly, and the fight scenes are generally well choreographed. The movie has good qualities, although it may require one to disconnect their brain for them to be seen.

Overall, Gods of Egypt is, at best, a Westernized knock-off of a story that was far more interesting in its original form. While it’s nice to have a film about any mythology that isn’t Norse, the depressingly large number of changes made to accommodate a white audience hurt the film rather than helped it. With ridiculous CG and awkward comedy, this is a movie that wasted an opportunity.

What John Said - Unicorns and rainbows?

The historical game of thrones