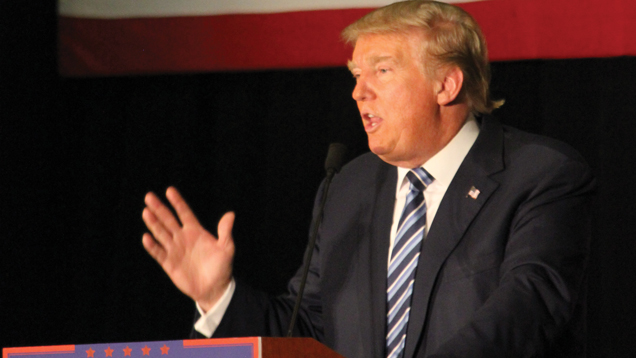 Credit: "DONALD TRUMP" BY MATT JOHNSON ON FLICKR (CC BY 2.0)

This isn't the first time in history that a charismatic leader brought a country together by using fear.


Editorial opinions or comments expressed in this online edition of Interrobang newspaper reflect the views of the writer and are not those of the Interrobang or the Fanshawe Student Union. The Interrobang is published weekly by the Fanshawe Student Union at 1001 Fanshawe College Blvd., P.O. Box 7005, London, Ontario, N5Y 5R6 and distributed through the Fanshawe College community. Letters to the editor are welcome. All letters are subject to editing and should be emailed. All letters must be accompanied by contact information. Letters can also be submitted online by clicking here.
The 2016 U.S. presidential campaign is a horror show mixed with trashy reality TV, with Donald J. Trump appearing as both the star and the villain.

Unless you’ve spent the last few months living under a rock, you may have noticed that a xenophobic Oompa Loompa has somehow managed to stay at the top of the polls for the nomination as the leader of the Republican Party, even after spouting comments that should have immediately disqualified him.

But this merkin-adorned piece of human garbage just won’t go away.

Though political pundits on both sides of the American political spectrum have come together in a rare instance of bipartisan cooperation to protest the possibility of racist regurgitated oatmeal running their country, no one has thrown bigger shade at The Donald than John Oliver on his HBO series Last Week Tonight. Oliver meticulously tore apart Trump’s (or should I say Drumpf’s?) entire existence, from his unsubstantiated statements about literally everything to his less than stellar business record.

And still, that didn’t stop him from using his tiny hands to snatch the lead out of his competitors’ grasps.

Trump won seven out of the 11 caucuses on Super Tuesday, putting him firmly in the lead above top contenders Ted Cruz and Marco Rubio. Even if Trump wins the Republican nomination there’s no guarantee he will win the election; he would still have to go up against Hillary Clinton or Bernie Sanders, whose race would be captivating audiences if it weren’t for Trump stealing the spotlight.

But at this moment it appears this evil hairball’s dream may be coming to fruition; Donald Trump may very well be the Republican nominee for the 2016 U.S. election.

Canadians may be scratching their heads at their American counterparts thinking, “How could this even happen? How can Americans not see that it is a terrible idea to elect him?”

But Canada now has its own version of the Trumpeter. Kevin O’Leary, one of the businessmen from Dragons’ Den, announced his interest in running for leader of the Conservative Party.

Though successful in his own right, his limited – or nonexistent – political experience should disqualify him from running at all. I appreciate the need for diversity in the political sphere and politicians with a variety of backgrounds to bring to the government, but to have someone lead a country who has no political experience sounds like a bad idea to me.

But can you really blame him for thinking he can do it? No one thought Trump could do it, but look where we are today.

The advantage that I’m sure O’Leary is looking to take hold of is name recognition. Reality TV shows like The Apprentice and Dragons’ Den have made Trump and O’Leary household names. This gives these candidates a head start in the election process because people already know who they are, and with their reality TV experiences they know how to appear charismatic to an audience.

Even our past election had a pinch of reality drama. Justin Trudeau had name recognition thanks to his father’s fame, and combining that with his good looks it was almost impossible to ignore Harper’s lack of charisma when standing next to Trudeau during debates.

When choosing who you will give your vote to, try picturing what they’re saying coming from someone who isn’t charismatic – I suggest Nicolas Cage – and see if you still agree with what they’re saying. And if you do they deserve your vote. But if it sounds less appealing coming from someone else, take a step back and reevaluate why you’re siding with them in the first place.

Remember the last time there was a charismatic leader who united a country of desperate people by singling out a minority group for the majority to project their anger and fear onto? Because I do. Don’t allow your country to be turned into a real life horror show.