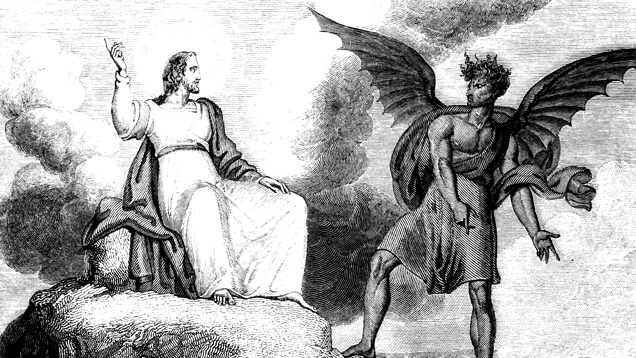 Satan and all of the villains of the world are the true miracle workers; it is God who is trying to restore his world to what it should be.


Editorial opinions or comments expressed in this online edition of Interrobang newspaper reflect the views of the writer and are not those of the Interrobang or the Fanshawe Student Union. The Interrobang is published weekly by the Fanshawe Student Union at 1001 Fanshawe College Blvd., P.O. Box 7005, London, Ontario, N5Y 5R6 and distributed through the Fanshawe College community. Letters to the editor are welcome. All letters are subject to editing and should be emailed. All letters must be accompanied by contact information. Letters can also be submitted online by clicking here.
If you are part of a church community or if you belong to a group of students trying to put the ways of Jesus into practice, you probably know that Easter is just a few weeks away.

On Easter Sunday, Christians around the planet will be remembering Christ’s return from death.

This is the greatest of the miracles claimed by the church: the resurrection of Jesus Christ. Some don’t believe it happened, they view it as something that certain people (about two billion and counting) believe in. Nevertheless they feel that it is ultimately false.

Others see it as something that is blindly accepted. Now, it is true that some people do accept the stories of Christ’s resurrection blindly. But the Christian traditions generally do not. There is plenty of evidence, so much that it takes more (blind) faith to believe that he did not rise from death than that he did.

Neither is Jesus’ rising from the dead some sort of one-off event meant to impress people into believing in him. It is impressive, but it is not an isolated event that God produced to begin a new religion. Rather, it is four things (at least four).

First, it is God’s vindication of Jesus as the Jewish Messiah who would lead the people of God into a new time of restoration.

Second, the resurrection is God’s vindication of Jesus’s interpretation of the Jewish faith.

Third, it is a manifestation of the pre-Jesus Jewish faith in the resurrection of the community of the faithful. God would bring this about in due course to reveal himself to the world as the living God of justice, grace, forgiveness and healing.

Fourth, it is a breaking into the world of a new thing that is yet to come, but has already begun. What has begun is the total healing of the creation. There will be a resurrection of all persons. The reign of death is on death row and will end. Services no longer required.

The resurrection of Christ is the greatest of the miracles presented in the Bible, but it is not the only one. There are miracle stories throughout the pre-Jesus and post-Jesus parts of the Bible. And, as might be expected, the stories of Jesus are awash in miracles.

These miracles are not magic tricks in the sense of making the performer look impressive. Instead, like the greatest of miracles, they are manifestations of the renewal that God is bringing to the human world and to the whole creation, hints or prequels of what is in store for the world.

But here’s my thing for today. The definition of miracles that most of us work with is that a miracle is a violation of the natural order of things. It is God interrupting the usual way the world works, his disrupting the laws of nature.

But I don’t think this is the best way to look at miracles. Jesus did not interrupt nature when he healed those who could not walk, those with illnesses and others who were blind or mute, or when he himself raised people from the dead. He restored nature.

In this way of looking at it, Jesus’s rising from the dead wasn’t a violation of the laws of nature, which dictate death for the human body. It was, among other things, a restoration of the natural order as it relates to the human body.

The real miracle workers are not the Mother Theresa’s and the wonder-working saints of the Catholic Church. The real miracle workers are the Adolph Hitler’s, the crystal meth makers in Toronto and London, the sexual predators and adventurers who could care less about the pregnancies they leave their partners to handle, the terrorists (however religious they may be) and the commanders of child soldiers.

And lastly Satan: Satan, not Jesus, is the real miracle worker in that he inspires and abets the continuing violation of the natural order, which God has for his creation.

However, it is God’s unstoppable intention to restore his world to what it should be. And, among other things, the resurrection of his son, Jesus Christ, is the signpost without equal that his intentions are not in question.

One day they will overrun the creation, evicting all dark miracle workers, leaving the rest to breathe a great sigh of relief and get on with living life as God has always intended.