Dance with the Devil in the pale moonlight 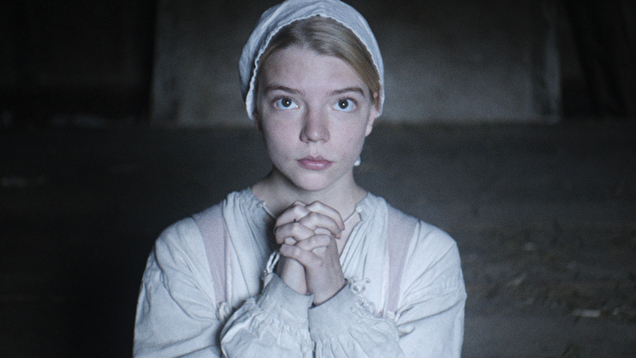 Credit: A24 (2015)
When mysterious and evil forces enter your life, what's a young girl to do?

Exiled from their town and shunned by their society, a small family tries to make a new life on a small farm in the middle of nowhere. Unfortunately, this is the 1630s in New England, and all the tales you’ve heard, of pacts with the Devil, of witches in the woods, of curses and foul crimes, are true.

The Witch mostly revolves around the family’s eldest daughter, Thomasin (played by Anya Taylor- Joy), as she tries to understand the strange things that are happening to her family. Her parents, played by former Game of Thrones actors Ralph Ineson and Kate Dickie, are little help as their eyes are clouded by grief and superstition.

All of the acting in the film, even that done by the young twins who can’t be more than six-years-old, is well done; although some of the editing was clearly fudged to make the accommodations always necessary when working with child actors. Ineson is especially believable as the proud and faithful Puritan father, desperately trying to save his family from the situation he got them into.

Along with the excellent acting, the movie also pays a great deal of attention to historical accuracy. Everything, from the clothing to the tools to the accents, is as accurate as possible to how things were in that time and place. Much of the script was lifted directly from historical records, which, while making it occasionally difficult to understand for anyone who doesn’t know a bit of Middle English or the Bible, helps with the immersion into the time.

While being billed as a horror movie, The Witch often feels more like a period piece. There are definite scenes that are frightening, and the musical score is typical of any horror film, but a great deal of the plot focuses more on the families suffering and drama than on witches and satanic rights. The twins provide the “creepy child” trope seen in so many horrors, and there are some strange things that happen, but the general feel of the movie is more “this is weird” than “I’m so scared I’m going to pee my pants.”

Aside from the lack of terror, the movie had few problems. Occasionally a scene might be longer than it should have been, or a cut poorly edited, but these instances are few and easily overlooked in light of the difficulties of filming a movie like this. The movie never drags on, with a runtime that is appropriate for the story. Where other movies add filler to drag you to the two hour mark, The Witch tells its story in an hour and a half and ends when the story is over.

Overall, The Witch is a well done period drama with horror elements. Despite some awkward editing, the movie tells an interesting story and has actors with enough talent to make the tale truly fascinating. Just remember to read up on Job and his wife before sitting down.
Horror Movie reviews Movies

Scientific Adventures: The age of cybernetics is upon us