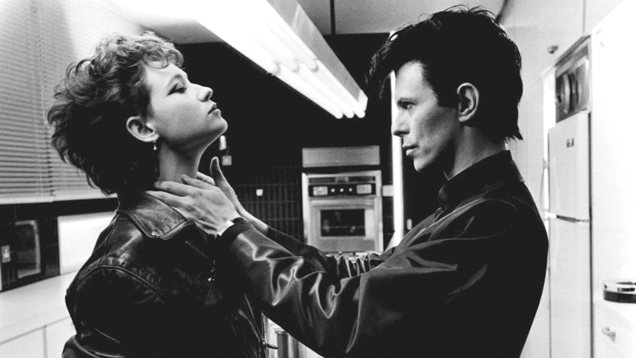 David Bowie plays with his food in The Hunger.


From mime to music, there wasn’t a medium of art that the late and great David Bowie could not master throughout his esteemed career and there was never a genre that he did not shy away from as an actor.

We’ve all seen Bowie dance, magic, dance in 1986’s family- friendly romp Labyrinth, but how many of us have seen him cut his teeth on the silver screen in its preceding adults-only horror flick The Hunger?

Bowie portrays John, the devoted undead consort of Miriam Blaylock (Catherine Deneuve), a vampire queen whose unholy reign goes back to the days of ancient Egypt.

Although they’ve been an item for two hundred years and counting, Miriam has somehow neglected to inform the once human John that there is a clause to her initial promise of eternal youth. Unbeknownst to him, John has been doomed to suddenly and rapidly age, yet still live.

This, of course, is no skin off Miriam’s back, as she has prepared an especial place in her attic for John to stay put and rot while she goes out and picks up someone younger, firmer and fresher to occupy her for the next few upcoming centuries. Exit poor John, off to join the putrid ranks of Miriam’s moulding exes.

She and Miriam engage in some sexual hijinks and before she knows it, she too has been sucked into the vampire-filled world of gaudy ankh necklaces and ever-billowing sheer fabric curtains. But is this really where she belongs?

Blending post-modern urbanity with visual influences from both German Expressionist and noir genres, The Hunger is a stylish entry in the vast, vast canon of vampire movies. Yet as a stand-alone story it requires conscious effort to follow as the plot trudges towards its utterly confusing ending with the pace of a funeral march, just slow enough to make one wonder if they to are straddling the realm of life and death while they watch.

That being said, The Hunger has more than enough merit to appeal to die-hard Bowie fans, cult movie buffs and aficionados of the early ’80s industrial phase.

As a vampire film made before vampire films were cool, the movie deserves a nod for bending and challenging the rules of power, sexuality and gender typically seen in horror movies of the time, an element that most likely drew Bowie into the project in the first place.

The Hunger is a little known fraction of David Bowie’s immense repertoire, but his performance clearly indicates his passion for the role.

Horror fans, now is the time to watch The Hunger. Like all of Bowie’s work, this outrageous and odd film was a risk made with courage and should not be forgotten