Reel Life: Falling from grace - The bigger they are (part two) 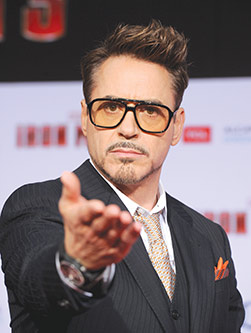 After cleaning up his act, Robert Downey Jr. began to grace screens in big budget films like Iron Man - wait, so why is he on this list?


Ugliness, thy name is dignity lost. And with a power as fickle as that of celebrity, aftershock of an exploded fame bubble can be particularly traumatic with just how inflated they can be. Noteworthy mentions include:

Iron Man? “He’s doing alright enough!” you say cautiously. Well, that’s you influenced by a massive PR turnaround handled expertly by whatever magnificent guardian angel he’s hired. Robert Downey Jr. is one of the last remnants of the so-called Brat Pack – a list of actors who frequented rounds in ‘80s coming-of-age, like Judd Nelson and Molly Ringwald. And boy did Downey Jr. fall the hardest of them all, substituting the usual fizzledout career for a decade of constant drug abuse fueled by his bipolar illness. All this makes Downey Jr.’s turnaround all the more impressive, having gone from “Him again? What’d he get busted for this time?” to “Is there a new Iron Man already?”

Gary Coleman was remembered as nearly nothing more than the butt of Family Guy jokes by the current generation, but in his heyday, he was king. Coleman – as the breakout character of ‘80s sitcom Diff’rent Strokes – was one of the highest paid TV stars, with an exciting future.

Until his parents Jackie Coogan’d him, leaving him to financially fend for himself, taking up a job as a mall security guard at one point. Coleman’s story is far removed from his comedic persona; if there were ever a perfect subject for a story of the loss of celebrity power and personal control, he would be worthy of an Oscar-winning screenplay.

Not exactly whom you’d call a household name, but Collins did well enough for himself, respected for his various secondary character roles in Star Trek: The Motion Picture and Revolution – and most well-known of his roles – the pastor patriarch Eric Camden, on the family drama 7th Heaven.

Which makes the cause of his fall from grace all the more disturbing – or darkly appropriate, depending on which school of thought you subscribe to – sexual abuse.

As part of gathering material to help divorce proceedings in her favour, Collins’ now ex-wife Faye Grant secretly recorded his blithely admittance to sexually abusing minors. The industry reeled in shock and horror upon these allegations brought upon himself, especially after his admittance in magazine interviews. Needless to say, lacking the clout of someone like, say, Roman Polanski, Collins has been completely cast out from the film world.