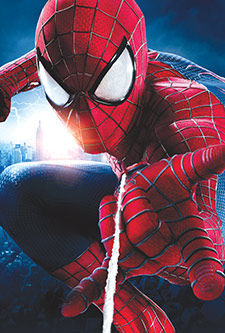 Re-casting Peter Parker already? Who could be the next actor to don the red and blue?


In an announcement that comic and movie fans alike have been waiting for, The Amazing Spider-Man is finally joining the official Marvel Cinematic Universe (MCU). To the uninitiated – despite being a property of Marvel Comics – the movie rights to the web slinger are a property of Sony Pictures, placing the five previous Spidey films outside of the continuity sent by The Avengers and its connecting films.

Sony hasn’t cut Spider-Man loose completely. It will still have the rights to release any individual films featuring the character, while working in collaboration to bring the same incarnation to life in the MCU, starting with Captain America: Civil War.

The announcement has put to rest many concerns that the movie would have to be shot without Spider-Man, who plays an integral role in the plot of this story. Also in response to the announcement, Marvel has reshuffled its previous release schedule, inserting a new co-produced solo film in the spot previously occupied by Thor: Ragnarock, pushing that film and several others down the line by as much as a year.

The entry of the wall crawler into the MCU also means one thing that fans enjoy a little bit less, as another actor will be donning the red and blue spandex from now on.

The disappointment hardly stems from an overall attachment to either Toby Maguire or Andrew Garfield, but from the simple fact that it will be the third reboot of the character in a little over 15 years.

With Garfield out, the hunt is on for a new actor. One who can strike the perfect balance between the awkward, geeky Peter Parker – whom Maguire was a little old for, and Garfield a little too cool – and the superhero that he learns to be.

With the recent nature of the news, no names have been linked to the part yet, but knowing Marvel it will either be someone big or someone unknown. Some may hope for the latter – after all, Parker is just a teenager and needs to look out of place among Robert Downey Jr. and co. – and I just can’t think of any known young actors that can fill that role.

The secondary factor of the agreement between Marvel and Sony will be the introduction of other Marvel characters into the solo Spider-Man films, leading to an opportunity for crossovers in the vain of the amazing – sorry for the pun – 1993 animated show.

Being able to insert say, Thor, into a Spiderman story offers the sort of tantalizing options that make a comic book fan’s mouth water. There is also the hope that this could open the floodgates, allowing the other Sony owned properties, X-Men and the newly rebooted Fantastic Four to follow in Spidey’s footsteps, and giving us what would surely be the most sprawling film universe ever.