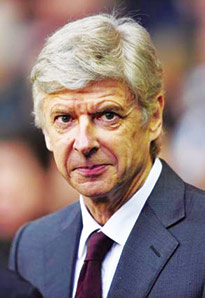 Arsene Wenger has seen better days, with his club and with his wrinkles.


Arsene Wenger has led Arsenal through some of their greatest years. The Frenchman managed only the second team in British history to go undefeated all season in 2003/04.

However, the man who has led the Gunners since 1996 has been under fire by pundits and fans of the club. Since that magical season in '03/'04, the club hasn't seen much success, not winning a trophy since 2005.

They have yet to win in Europe (even though they made it to the European Final in 2006), and they have fallen to Bayern Munich this year, starting with a soft 3-1 loss in the first leg.

This all makes Arsenal fans wonder if it's time for Wenger to go.

We need to realize why this man hasn't been fired already. Wenger haters claim he is still living off of the ‘glory days' of the past... except those days yielded the best side ever to play English football, and also yielded seven trophies in a span of seven years.

During this time between success and failure at Arsenal, the club moved from their historic stadium Highbury to a new one called the Emirates Stadium. The stadium cost nearly Ł400 million when it was built in 2006, putting the club in massive debt.

Wenger has always believed in development, but this was a completely different situation. Since the stadium was built, he has used his assets, as a manager, to close the money gap. He's sold the likes of Cesc Fabregas, Samir Nasri, Robin Van Persie, Emmanuel Adebayor and Ashley Cole for millions of pounds apiece. He buys players for cheap, and then matures them to sell later and make a profit.

He has played the system well and should be given credit for that. That being said, he is known to dish out mid-level transfer payments for players, hoping for the same result. He bought Oliver Giroud and Lukas Podolski to replace Van Persie; those two players cost him close to Ł15 million, while he only got Ł20 million out of the Van Persie sale.

It should also be noted that tighter financial laws are coming into place next season, and the Gunners are one of the only clubs in England ready for such measures because of Wenger.

After crashing out of the Champions League again, Arsenal and Arsene are at a crossroads. But is changing something like this really going to help? With new financial rules coming in, they might be best to stick with a man who keeps his wallet in his pocket as much as possible.