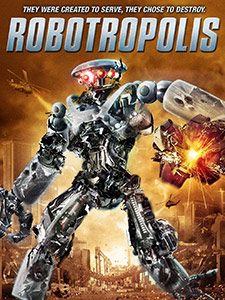 Over the past decade, we have witnessed some incredible technological breakthroughs. Smartphones. iPads. HDTV. Yet the vast majority of the population does not have their own robot butler.

Is it just me, or does that seem wrong? Weren't we all promised robot servants would be a part of our lives sometime after the year 2000? Yet now we're 13 years into this millennium, and I'm still pouring my own bowl of Count Chocula and bathing my own children in a completely robot-free home.

Thankfully, Hollywood is here to give us a glimpse of what we are missing. In the glorious tradition of RoboCop 3 and Short Circuit 2 comes Robotropolis, an instant science fiction classic that envisions a scenario where more robots would actually be a bad thing.

Robotropolis takes place in New Town, a private community where robots have become commonplace. They work in factories and interact with the locals. A television news crew has come to New Town to file reports on how perfectly everything is going. However — brace yourselves — a stunning turn of events changes everything.

While the GNN crew is in the midst of a live broadcast, a robot wanders into a soccer game. This game certainly could not be called a “friendly,” as the robot inexplicably shoots and kills one of the human participants. There have only been two exciting moments in soccer history: when Brandi Chastain ripped off her jersey during a World Cup victory celebration, and when France's Zinedine Zidane head-butted someone back in 2006. Well, we now have a third thrilling soccer moment to remember.

Now, the simple solution would be to find the killer robot and destroy it. However, it is not that easy. At the risk of sounding racist, all these robots look alike. That's not the only issue, though. The bad behaviour is spreading, and before long, the robots are preying on the townsfolk like a family of guinea pigs attacking a Dairy Queen ice cream cake. Have you ever seen guinea pigs eating a cake? It is not a pretty site, and neither are these vicious robot assaults. And no, I am not getting any kickback from Dairy Queen for mentioning them in this review.

Basically this situation becomes as destructive as a “Harlem Shake” video shoot in Oasis. Although maybe that isn't an appropriate comparison. I mean, these robots seem to have become sentient beings capable of original thought, so they likely wouldn't have anything to do with a “Harlem Shake” video.

The story is mostly told through the point of view of the GNN crew, so it is almost like the viewer is watching an actual news broadcast. Except in this case the news is interesting, and there is no awkward banter between the anchorman and weather girl.

Robotropolis is a stylish tale that not only delivers plenty of action and drama, but also gives viewers plenty to think about. How much do you trust that microwave in your kitchen? What about that electric toothbrush in your bathroom? How well do you really know your iPod Nano? I'm not suggesting that these devices are going to rebel and murder you while you sleep. Just to be on the safe side though, you might want to see if you are able to sleep with one eye open.
Movies Movie reviews

1
City announces outdoor movie nights series, "Through the Decades"
2
Five movies to watch in 2021
3
The gender problem in the film industry
4
The Forest City Film Festival makes its return
5
How the Wizard of Oz became an LGBTQ2S+ classic

Reel Views: A not-so-new look at an old fairy tale

McGee's Movie Moments: Why hosting the Oscars is an impossible gig