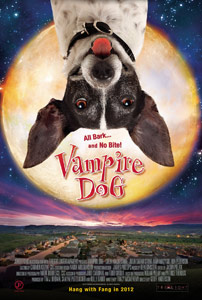 Halloween is upon us. As an avid cinema fan, this is one of my favourite times of year. There are so many spooktacular films to watch, about chainsaw-wielding maniacs, brain-munching zombies and, of course, 600-year old vampire dogs. And that last genre is celebrated in the film I will be taking a look at this week, Vampire Dog.

For the slim minority of Interrobang readers who have yet to see Vampire Dog, I'll give you a brief synopsis. A teenage boy named Ace and his mother move to a new town after the mother lands a job as a music teacher. Moving and starting at a new school are generally big adjustments, but even more so in this case. Despite being a talented drummer, Ace cannot perform in front of others, and ends up making a fool of himself the first day at his new school when he tries to show off his percussion skills. Lesson to the kids out there: don't try.

Ace's abilities could sure come in handy, as the school is earmarked to be closed, unless they finish first in a battle of the bands competition. There is a school on my street that has been fighting off closure for years. Instead of holding rallies and getting people to sign petitions, maybe they should just teach the kids there to play some damn instruments.

But this movie isn't called Vampire Teen Drummer. It's Vampire Dog, so I should mention something about Ace's fourlegged friend Fang, voiced by Norm Macdonald. Fang, originally from Transylvania, is passed down to Ace from a distant relative. Unlike most dogs that can simply sniff other dog's hindquarters, this one has some incredible skills, including the ability to talk. We learn that one of his previous owners fought the legendary vampire Vlad the Impaler, and while trying to save his master, Fang himself was bitten.

Now if a 600-year-old talking dog can't inspire you, I don't know what else will. And that's just what Fang does for young Ace, giving him the confidence to stand up and shine. Norm Macdonald is famous for his ability to make even the most mundane material humourous with his delivery, so you can only imagine how funny he is in this one when given A+ material.

Macdonald is one of my all-time favourite celebrities. However, as brilliant as he his, his career has not soared to the heights it should have. It has been one setback after another. In the mid-1990s, he was in the midst of a terrific run as the Weekend Update anchor on Saturday Night Live when he was unceremoniously canned. He went on to star in some very funny television programs, The Norm Show, A Minute With Stan Hooper and Sports Show with Norm Macdonald, all of which were axed in short order. But the darkest hour is just before dawn, and after landing the role of the voice of a vampire dog in a direct-to-home-video film, Norm's career is sure to reach new heights.

The creative team behind Vampire Dog combined the best elements of The Twilight series, School of Rock and Citizen Kane. The result is a treat that does the trick for anyone looking for a film the whole family can watch together this Halloween season.