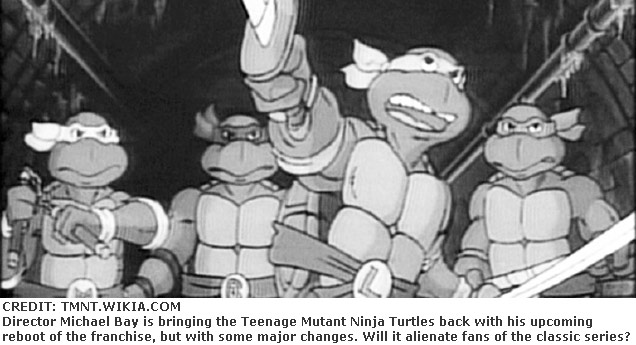 Hot diggity dog! I've always wanted to start an article that way, but I've just never been jubilant enough to do so. However, in recent weeks, I've learned of an exciting development — nay, two exciting developments — that will make 2013 the most exhilarating year for feature films to date.

As a respected film critic, I have access to an exclusive membersonly website called Google, which allows me to find out about the latest film production news. It is through this avenue that I learned that two of my all-time favourite film franchises, Leprechaun and Teenage Mutant Ninja Turtles, will be getting the reboot treatment. A whole new generation will get to enjoy these wonderful stories. But, as I will explain, not everyone is as thrilled as the Cinema Connoisseur is.

Leprechaun
The Leprechaun series of six horror/comedy films debuted back in 1993. Warwick Davis (Life's Too Short) portrayed a delightfully devilish little Irish fellow who terrorized those who tried to separate him from his pot of gold and other lucky charms. The first film starred a young actress by the name of Jennifer Aniston, who I'm quite certain would refer to it as the standout moment of her career. By the fourth film, the producers decided to mix it up a little bit and send the Leprechaun into orbit, resulting in the landmark 1997 film Leprechaun 4: In Space. If legendary writers Isaac Asimov, Arthur C. Clarke and Philip K. Dick got to work together to try to pen the ultimate science fiction classic, it would still pale in comparison to this film. Leprechaun then went on to hang with Ice-T, thugs and prostitutes in two further films, Leprechaun in the Hood and Leprechaun: Back 2 tha Hood.

One decade after the last Leprechaun film was released, news broke that Lionsgate and WWE Films have agreed to work together to give the series a glorious return to the big screen. Lionsgate's latest film The Hunger Games has made $211 million worldwide in just a matter of days. When you add that to the gross of WWE Films' latest release Bending The Rules, you get over $211 million. Now that's a tag team that even the Fabulous Rougeau Brothers couldn't stop.

Details are sketchy at this point, however it does not look as though original star Davis will be part of the film. He stated recently that he feels the film should be done as a sequel, perhaps as a road film, and maybe featuring a female leprechaun. The WWE does employ their own leprechaun, Hornswaggle, so he may be a possibility to fill in. If I were casting the film, however, I would prefer they use Dwayne “The Rock” Johnson in the title role, and use the same techniques they used in Lord of the Rings to make him look smaller. I just don't know how good his Irish accent is. Nevertheless, I'm hoping for a Rock/Aniston pairing in Leprechaun when it hits select theatres sometime in 2013.

Ninja Turtles
No, I didn't forget the “Teenage Mutant” portion of the title... but Michael Bay certainly did.

The classic tale of four gnarly mutant reptiles who learned karate from a wise old mutant rat named Splinter first was told back in 1984 as a comic book series. It then became a wildly popular cartoon show and eventually a live-action series of films.

Well, Bay, director of the highly acclaimed Transformers films and the music video for “I Touch Myself” by Divinyls, is bringing Michelangelo and his brothers back to the big screen in news that will have lots of people touching themselves. Not everyone, though.

It seems as though Bay has a different vision for future films in the franchise. Instead of being mutants, the turtles will be from another planet. Robbie Rist, who provided the voice of Michelangelo in some of the previous films accused Bay of “sodomizing” the franchise. However, 1980s teen heartthrob Corey Feldman, who provided the voice of Donatello, has endorsed Bay's project. It was Feldman's endorsement that put Barrack Obama's presidential campaign over the top, and Bay is hoping for similar results when Ninja Turtles hits theatres on December 25, 2013. That's right, it opens on Christmas. I know I'll be waiting outside the theatre — hopefully my wife and children won't miss me too much. To those who still aren't sold on this idea, let me ask you this one question: has Bay ever made a bad film?

My 15 Minutes With... The Creekside Strays poised to release new CD

Reel Views: May the odds be ever in your favour during The Hunger Games