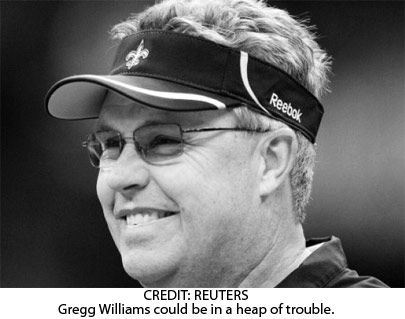 YIKES! In the midst of all the usual offseason talk (draft, free agency) comes an insane story out of New Orleans. Apparently the Saints have been offering bounties to players on their defence for hits that cause an injury to an offensive player. Oh my, what a mess. This all stems from former Saints (and current St. Louis Rams) Defensive Co-Ordinator Gregg Williams. The former Buffalo Bills Head Coach and Washington Redskins, Jacksonville Jaguars and Tennessee Titans Defensive Co- Ordinator was allegedly responsible for this bounty program, and players are popping up everywhere saying that this system has existed for over 15 years.

While none of this has actually been confirmed by Williams — or the NFL for that matter — if this did in fact happen, there needs to be severe punishment. There is already talk comparing this to Spygate, the videotaping scandal involving the New England Patriots from several years ago. In that case, there were several huge fines laid down on the team and the coach (Bill Belichick), and the Pats also lost a first-round pick in the next year's draft.

I expect something similar in this situation. If this indeed happened in seemingly every stop along Williams' coaching career, he needs to feel the blow as well. I expect the NFL will certainly throw out several fines and could even take the first-rounder from the Saints in April's draft, but it shouldn't stop there. I can't see any way that Williams doesn't get suspended for some period of time. If this has happened everywhere Williams went, is a complete ban from the NFL in the cards?

This is something that I'm sure has existed in the NFL for years, but now that it has been exposed, the hammer needs to drop. It's basically the same as the Spygate scandal. Teams came out and said they all stole signals from opposing teams at some point, but since the Patriots were caught, the NFL made an example out of them. That is why I expect massive punishment from the NFL in this situation.

The biggest losers in all of this are the St. Louis Rams. They were expecting to have Williams as their new defensive co-ordinator this year, but with suspensions (and/or long-term bans) on the table, that likely won't happen — at least, to start the season.

Rewarding players for intentionally injuring opposing players is obscene, and can NEVER happen. This game is dangerous enough as it is without players being reckless to earn an extra buck. I've just written this entire article, and I still can't believe this is happening. Just silly.

The Heel Turn: Sammartino belongs in the Hall of Fame

Some great and not-so-great Leafs coaches