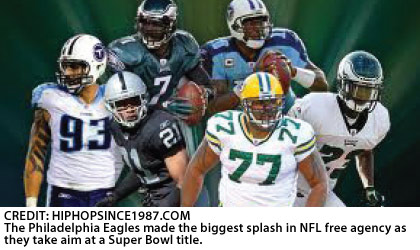 Welcome back students and NFL fans! After a bit of a rocky summer in the NFL world, the collective bargaining agreement was reached, and we avoided the first NFL work stoppage since 1992. However, it made for a ridiculously short free agency period, and fast and furious signings followed. To get you back in the mood for some football, here are a few storylines to follow throughout the 2011/12 NFL season.

1. "The Dream Team" — Much like the Miami Heat of the NBA, the Philadelphia Eagles decided that this year they would try to buy themselves a Super Bowl title. In came highly-touted cornerback Nnamdi Asomugha, defensive end Cullen Jenkins, running back Ronnie Brown and more. On a team that already boasted playmakers on both sides of the ball, these moves made them virtually unstoppable. However, only time will tell if quarterback Michael Vick can stay healthy all year, because the backup QBs are nothing to write home about.

2. Defending Champs — The Green Bay Packers were very quiet during the frantic free agency period because, quite frankly, they didn't need anything. They will be getting five or six key players back from injury, including running back Ryan Grant. The Packers are the favourites to challenge the Eagles in the NFC, and teams will be hard-pressed to stop the Cheeseheads once again this year.

3. Peyton Manning's Neck — In case you didn't hear, Colts QB Peyton Manning underwent surgery to repair some damage in his neck during the lockout. So far in preseason, Manning has been inactive for the Colts games. There is a chance (however small) that Manning will miss the season opener as well. This will be a scary couple of weeks for the Colts, as their backups have done NOTHING to put fear in the hearts of the NFL. No Manning, not many wins for the Colts this year. However, Manning is a tough SOB, so he will likely play through the pain. It's something to watch, nonetheless.

4. New England and New York Rivalry — The Jets went 2-1 against the Pats in three meetings a season ago including a playoff win and Jets coach Rex Ryan hasn't let us forget it. Tom Brady and his crew will have to figure something out to beat this team, or their dreams of more titles for Mr. Terrific will disappear. On a side note to this one, imagine the verbal battles that could ensue between Ryan and the Pats' new wide receiver Chad Ochocinco. If only Ocho wasn't shielded under the Bill Belichick no-talking rule.

5. Surprise Teams: Many experts are predicting that we will see some new faces in the NFL playoffs this year. Some of those teams include the Detroit Lions, Oakland Raiders and Tampa Bay Buccaneers. Out of the three, I think the Bucs are the most likely to make it, but they will have to compete in an incredibly tough division. The Lions to me are one more year away (Playoffs in 2012, BOOK IT). The Raiders are still a mess, but they are sloooooowly coming around.

I hope these potential storylines will get you excited for the season. I'll be back in a few weeks with my first Game of the Week article. Until then, feel free to follow me on Twitter @JVZ_NFLCzar.