Trent Williams Sports & Leisure March 22, 2010
As Canada's top fighter Georges St. Pierre gets set to defend his title in a few weeks against British up-and-comer Dan Hardy, the question begs to be asked; when will it be enough for St. Pierre at the 170lb division? 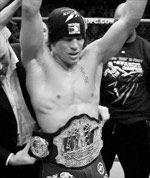 In this day of dominant champions St. Pierre is the only one that hasn't made a move, or a commitment to jump up a weight class for another challenge. Lightweight champ BJ Penn, who is also a former welterweight champion, decided to try his luck in St. Pierre's weight class before. We all know that was an experiment gone wrong for Penn but he at least had the balls to do it.

Anderson Silva is already a contender in the 205lb division to go along with being the reigning 185lb champion for his past 10 fights. Unlike Penn, Silva has seen a very large amount of success fighting guys in the weight class above the one he calls home. Realistically, there's not many challenges left for Silva at middleweight, pretty much forcing him to move up in weight. This could be the same dilemma that faces GSP soon as well.

St. Pierre has dominated any top contender thrown his way at 170lbs. The only person left after he fights Hardy will be Paul Daley, who realistically is the same fighter that Hardy is.

After defeating everyone in your weight class, what do you do? Sit around and start to fight rematches of everyone? The grass seems so much greener for St. Pierre in the 185lb division in regards to interesting fights.

I'm not saying he should jump in and fight Silva right away for the title, that would be crazy, but fights against Michael Bisping, Alan Belcher, Damien Maia, Chael Sonnen all make sense and would all be great tune-up fights to help introduce the French champion to that new division.

Rumours are already swirling about GSP making that jump to 185 following his fight with Hardy — given that he wins. His training camp has said that he's added 10 pounds of solid muscle to his frame in preparation of the Hardy fight and that he's looking for new challenges in his career.

It might not come right after the fight, but I fully expect that St. Pierre will make the decision to start fighting in the 185lb division eventually. It just makes sense for him to do given the current state of his career, the state of the UFC and how so many people are making this claim that it would be a good thing to see.