Jessica Ireland News February 16, 2010
Last Wednesday college faculty voted on the colleges' final offer, with a slim majority — 51.25 per cent — voting in favour of the deal.

However, these results are not final yet.

A number of college faculty members can vote by mail-in votes. Over 300 ballots are still waiting to be received and counted, states the Ontario Public Service Employees Union website.

The official results may not be known for about two weeks which means students will still be waiting anxiously for the final verdict.

If it turns out that these extra ballots swing the vote and the offer is ultimately rejected, the union will then determine a new strike date and the two sides will move forward with more negotiation. 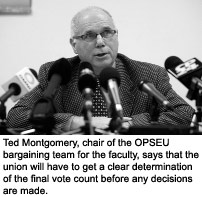 OPSEU Local 110 had anticipated that Fanshawe faculty would be more in favour of accepting the offer, said chief steward Darryl Bedford.

“We thought it would be close...with the things that happened in London, with the LTC strike,” he said.

He also added it was “possible” that the affect another strike would have on students was also factored in.

While the contentious issues have been skirted for now, the results clearly don't demonstrate overwhelming support — which may mean the same issues of salary and workload could pop up again and in a stronger way.

“It's entirely possible the same issues will come up again,” said Bedford. “We are in for a tumultuous period.”

Howard Rundle, president of Fanshawe College, believes these issues will not be focal points in future negotiations.

“I'm not too worried. Fundamentally, these were not huge issues for the faculty as you can see with the vote,” he said, explaining there would've been a clear rejection of the offer otherwise. “Once the faculty works under the contract for three years...there will be nothing to be concerned about.”

“I think the issues will evaporate.”

Classes will continue to run as normal. Any strike that may happen is still a last option, if binding arbitration fails.

But at this point, it will take quite a few votes to change the current outcome, said Rundle.

“I would hope in the end there won't be a strike,” he said. “There needs to be a pretty massive turnaround to turn it into a strike.”

Both sides will now await the official province-wide results that must be certified after a review by the Ontario Labour Relations Board.

Letter to the editor: Parent irked