Every so often in Hollywood, two legends are brought together, and magic is created. I'm sure you all remember when Al Pacino and Robert DeNiro shared the screen for the first time ever in Heat. Who could ever forget the pairing of Clint Eastwood and Morgan Freeman in Million Dollar Baby?

Last, but certainly not least, the silver screen sizzled with the energy created by Hulk Hogan and Jim Varney teaming up in this week's selection, Three Ninjas: High Noon at Mega Mountain.

3N:HN@MM, as I will refer to it from now on is the fourth and finest chapter in the Three Ninjas series of adventures. This time around, the three young lads that go by the monikers Rocky, Colt and Tum-Tum visit an amusement park called Mega Mountain. Appearing at the park that day is Dave Dragon, the star of a TV action series, portrayed by the Hulkster. 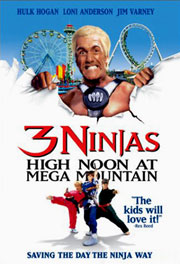 Now you're probably thinking, “Hey, that sounds like a great movie,” - but I haven't even begun to describe the plot. You see, Mega Mountain is taken over by an evil vixen named Medusa (Loni Anderson), her sidekick Lothar Zogg (Varney) and a gang of ninjas. They refuse to let any of the visitors leave for a penny less than the astronomical sum of $10,000,000! Wow, my fingers are sore after typing all of those zeroes.

Unfortunately for these villains, I forgot to mention one thing - Rocky, Tum Tum and Colt are not just garden-variety children, they too are ninjas. You may have been able to gather that by the title. The boys, assisted by the aforementioned Dave Dragon, attempt to put an end to the hostage taking shenanigans. Are they successful? Go see it for yourself to find out.

Regular readers of this column know how highly I think of the acting skills of Hulk Hogan. I've been following his career since it's early stages in the Shakespearean theatre production of No Holds Bard. Since then he's appeared in countless movies, television programs, and even had a brief foray into the world of professional wrestling. On top of all that, he's also quite a musician. Do yourself a favour and search the Internet for an album titled Hulk Rules, recorded by Hulk Hogan and the Wrestling Boot Band. If you don't shed a tear during the song “Hulkster in Heaven,” where he sings about a dying fan, you're a freakin' robot! Plus he raps on the album. Yes, that's right.

What more can be said about the late Jim Varney. The man created one of the great characters of our time in Ernest P. Worrell, featured in such classics as Ernest Goes To Camp, Ernest Scared Stupid and Ernest Gets Denied a Credit Limit Increase. The man had plenty of commercial success before taking on the role of dastardly henchman Lothar Zogg. He clearly did this one because he believed in the project, and felt this would garner him the respect of his peers and his critics. Mission accomplished James.

Hogan and Varney would have been enough, but the creators of this epic gave us even more when they cast Loni Anderson, star of the classic sitcom “WKRP in Cincinnati,” and ex-wife of Burt Reynolds. As Medusa, Loni delivers a deliciously sinister performance. Part Cruella Da Vil, part the shark from Jaws, Medusa is rotten to the core, and is a joy to watch.

I have heard many actors say, “Never work with children.” Well, those actors certainly could not have been talking about the three fine youngsters in this picture. They are all absolute pros. As Colt, Michael O'Laskey is particularly strong. He reminds me of a young Kevin Spacey, although I'm sure not sure if Spacey was ever to execute a roundhouse kick nearly as effectively as O'Laskey could.

I could rack my brains for weeks, and still not think of anything negative to say about this film. Does that mean that it is a perfect film? Yes, that's exactly what it means. Watch 3N:HN@MM ASAP.