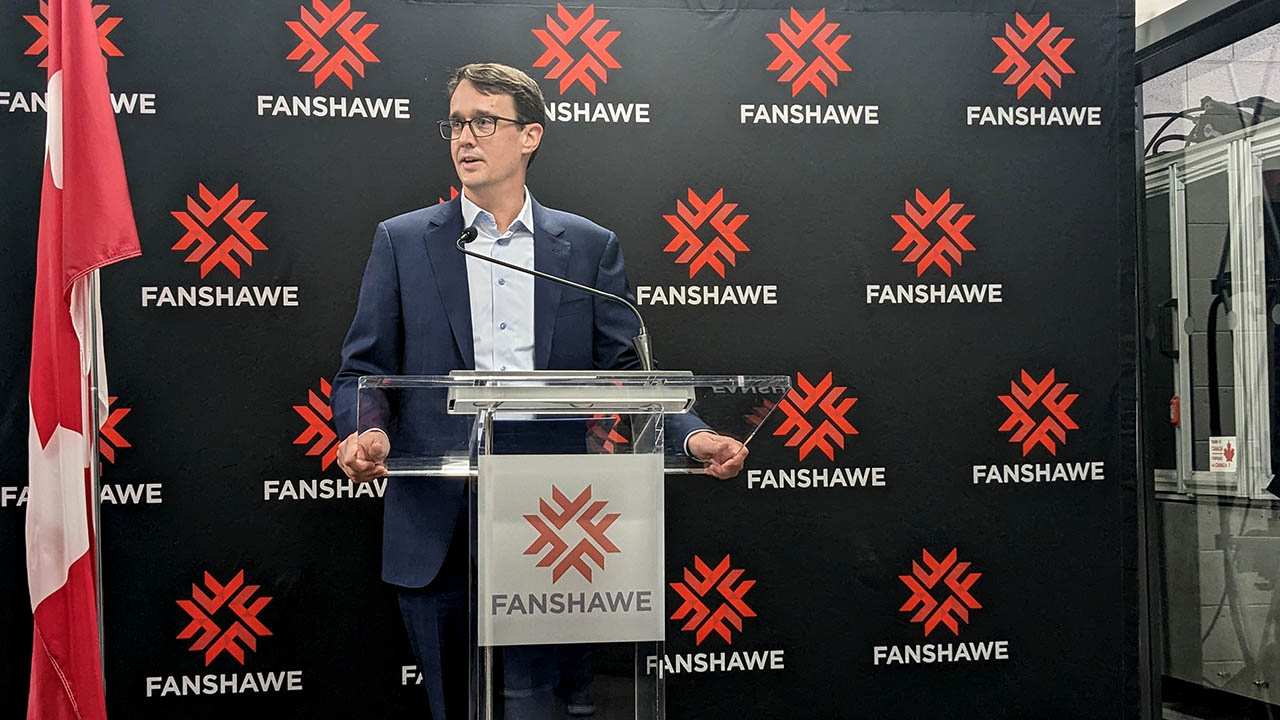 On Jan. 11, the Ont. Minister of Labour, Immigration, Training and Skills Development Monte McNaughton visited Fanshawe College to say a few words on how the province is expanding apprenticeship training, starting with a new Fanshawe program.

In a short speech, McNaughton thanked the school for allowing him to be there and congratulated the school on the approval of the new welding apprenticeship program that will be launching in the fall.

“Welding and the 17 other skilled trades programs offered here are pathways to rewarding lifelong careers,” McNaughton said. “These are jobs that’ll let you build a better life, support your family and give back to your community.”

The new program will start with a class of 20 students in Sept. 2023. The program will make use of the newly renovated 50-station welding lab, making it one of the largest in southwestern Ontario.

According to McNaughton, over 3,300 job postings in the skilled trades were opened in the city of London alone. The investment in programs such as the welding apprenticeship are to try and address the labour shortage that Ontario and Canada on the whole has been experiencing.

“Fanshawe College trains more apprentices than anyone else in the region, and they do a great job of it. We’re desperate for welders, automotive machinists, and all kinds of other skilled trades. So, this is a huge step to resolving that issue.”

During the introduction, Fanshawe also recognized the success of one of the students in the program, Abigail King. King, a Collision Damage Repair Technician, received a gold medal at Skills Ontario and represented Canada at the international skills competition in Switzerland.

McNaughton extended congratulations on the behalf of Premier Ford and the provincial government and said King was “a trailblazer for women in the skilled trades in Ontario.”

In 2022, it was reported by the Government of Canada that women, immigrants, people with disabilities, Indigenous people, and racialized Canadians were the most under-represented groups in the skilled trades across the country.

When asked how the government of Ontario is helping to incentivize more diversity and equity within the trades, McNaughton spoke of a previously launched initiative for employers.

“If they bring on women, Indigenous people, people from other underrepresented groups, they get up to $17,000 per apprentice they bring on,” he explained. “We’re really trying to diversify the trades and really just to send that message that the skilled trades are for everyone in Ontario.”

McNaughton also added that elementary schools will now be teaching the 140 different skilled trades that are on offer. In addition, trade recruiters were sent to Ontario high schools to talk about careers in the skilled trades.

There is no such thing as “unskilled labour”