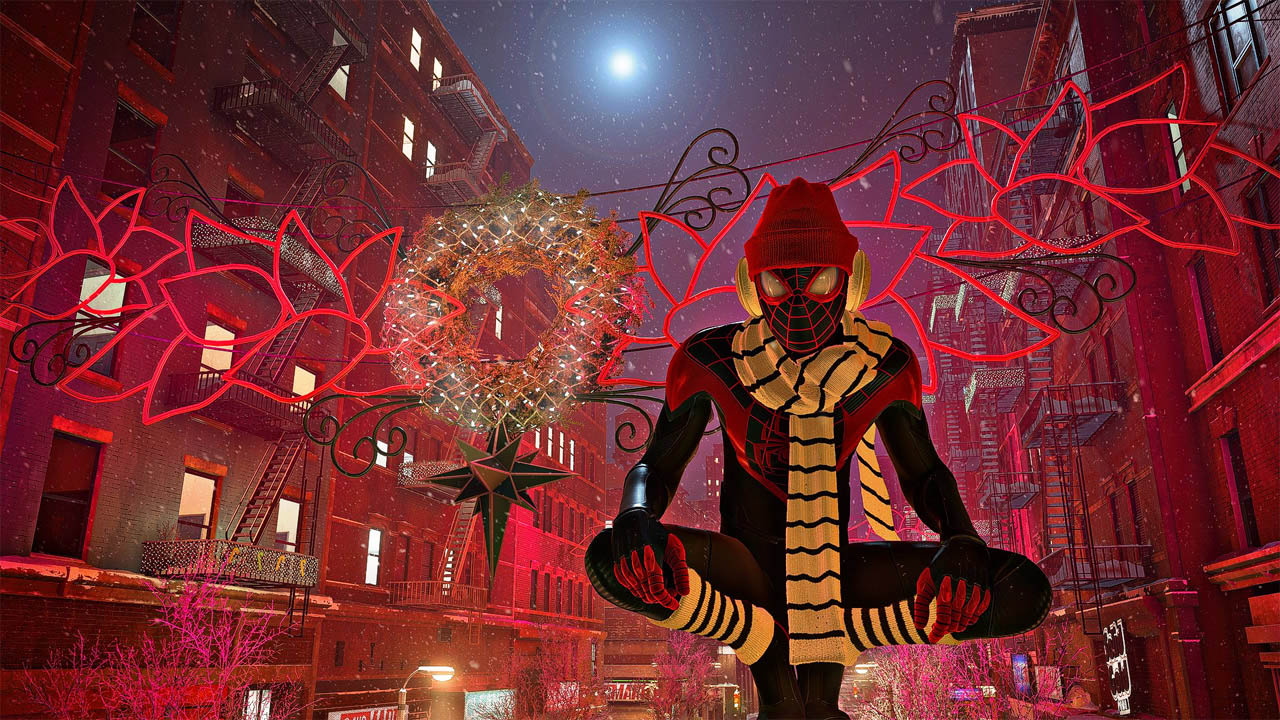 CREDIT: SONY CORPORATION
One of the latest holiday-focused that can be included on this list is Marvel's Spider-Man: Miles Morales.

For decades as the snow rolls in and the temperatures begin to drop, the festive spirit spurs on conversations of It’s a Wonderful Life, Rudolph the Red Nosed Reindeer, Die Hard, and more. Everyone has their thoughts and opinions on what their all-time favourite holiday movie is. These debates and conversations have gone on for years and will continue long into the future.

One thing that isn’t being talked about enough though are holiday video games and which among them ranks as the best. We’ve now hit a time where there are enough games out there with holiday themes and settings to properly have proper discussions about it.

Of course, there are plenty of games that have seasonal activities including Destiny 2, Animal Crossing: New Horizons, Overwatch 2, etc. All are great in their own right, but primarily we’ll look more into discussing games that have a winter and holiday focus tied into a large portion of their content.

One of the latest that can be included on the list that swept the gaming community was Marvel’s Spider-Man: Miles Morales. A spectacular third person action-adventure game that was one of the headliners for the new Play- Station 5 console. Its smooth swinging mechanics, great combat, and compelling story made it one of the higher rated titles of the time.

With the obvious holiday setting, the lights and snow adorning a modern New York City, it is an easy pick for this list.

Another important one to mention for a list containing the best holiday video games is Batman: Arkham Origins. The third game in Warner Brothers’ Arkham series, this one is a prequel to the rest and is set on Christmas Eve in a wintery Gotham City.

It didn’t quite hit the same successes as it predecessors did, but Arkham Origins still stuck to the great maneuvering and combat that the series was known for, keeping it in a good enough spot to be in the conversation for best holiday video game.

There are obviously many other video games that can be brought into the conversation in terms of ones with holiday themes or set during the holidays. Bayonetta 2, Dead Rising 4, NBA Jam: On Fire Edition, and Saints Row 4 are all important games.

Of course, for many, the best holiday video games will be the ones that they have the fondest memories of playing. Many can recall opening up their new Wii and playing some Wii Sports on their Christmas Days, going through rounds of bowling the whole day. Some have memories of unwrapping Halo 2 and playing rounds of multiplayer with their friends.

This is exactly what video game companies target, knowing full well that there are massive increases in game sales during the holidays. Companies will either push through sales to increase their past products or very often you’ll even see companies targeting holiday releases to capitalize on the time of year.

This can be said for many different industries, but with video games garnering so much attention now a days and becoming more and more on par with movies, it’s an especially important time of year.

With the holiday season in full swing and with video games on their way to becoming the next major form of media in the world today, we may be getting past the point of just thinking about movies during this time of year. That being said, don’t expect this to end with me telling you the best holiday video game. We already know how aggressive conversations can get when we tell people Die Hard is a Christmas movie.

Just be prepared with an answer of your own because we may not be too far away from this becoming a more common question to hear each year.
Christmas Holidays Marvel Video games

Sustainability Today: It's time that we consume responsibly