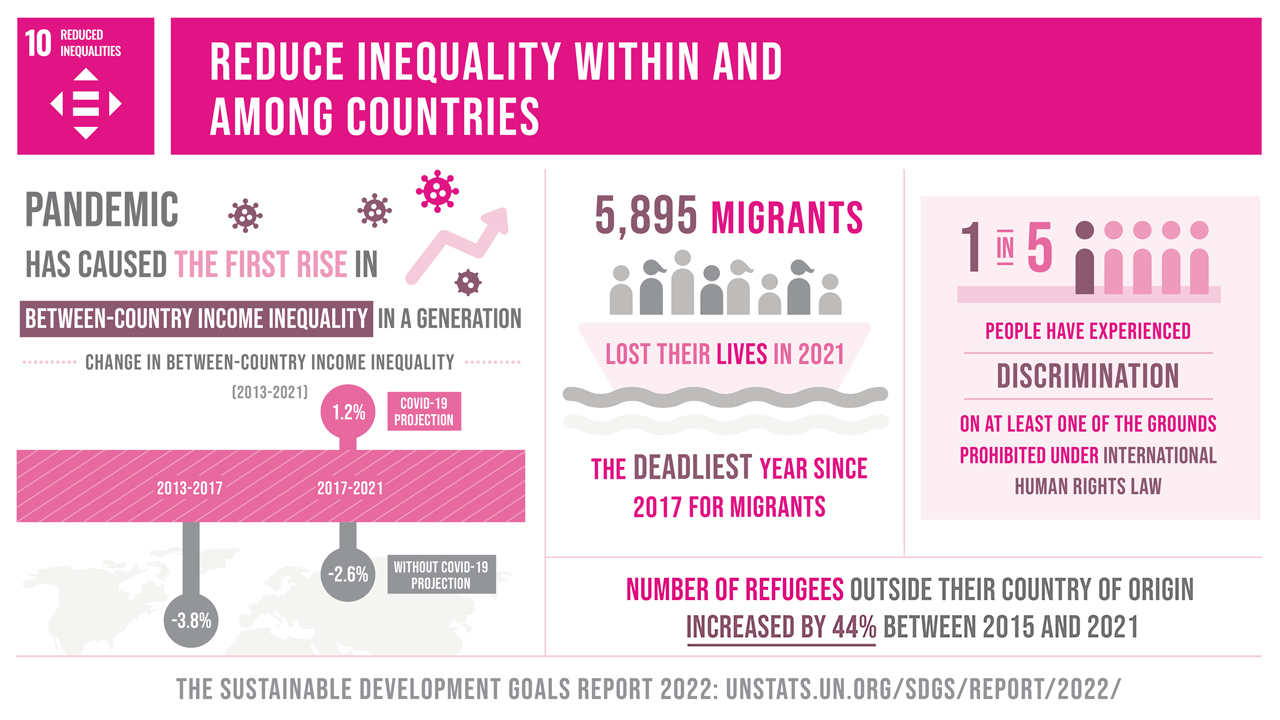 CREDIT: FANSHAWE SUSTAINABILITY
The SDGs Report states that about one in five people have "experienced discrimination on at least one of the grounds prohibited under international human rights law."

The last century has defined the world’s geography. The Great Wars and other significant events resulted in boundary lines being erased and redrawn, reshaping geo-politics. What remains unchanged is inequality, whose existence is a threat to a sustainable future.

Inequality has many facets; issues such as Iranian women protesting public dress code to migrants fleeing their war-torn countries, stem from experiencing inequality. To combat this, the UN Sustainable Development Goals (SDGs) have rightly included Goal 10: Reduce inequality within and among countries.

According to the SDGs Report (2022), by June 2021, the number of people fleeing their “countries due to war, conflict, persecution, human rights violations, and events seriously disturbing public order” reached 24.5 million — the highest on record. The year saw over 5,000 such people dying; at least 700 along the USA-Mexico border. It’s not just war and economic inequality; natural disasters and lack of support also affects people. For example, the drought in Somalia, which started in 2020, has displaced about 0.6 million people.

Losing your home is devastating, but the following socio-economic problems are equally harmful: According to the SDGs Report, over 80 per cent of refugee families live in “communities that are either food insecure or at the risk of becoming one,” and they turn to “restricting adult consumption to feed children more, early marriage, or taking illegal jobs to survive.” The cycle of tragedy starts to unfold.

Inequality also exists in the form of discrimination. The SDGs Report states that about one in five people have “experienced discrimination on at least one of the grounds prohibited under international human rights law.”

At the time of writing this article, Russian aggression continues in Ukraine and the Taliban once again controls Afghanistan. The 21st century has been the one of peace and sustainable development. War is not a solution, co-operation is, as summed up by Jawaharlal Nehru, the man who spearheaded the nonalignment movement during the Cold War era, “Without peace, all other dreams vanish and are reduced to ashes.”

The root of this inequality lies in people’s mindset and biases, which needs to change. It may be done with political will manifesting as protection laws, but we can contribute too by building empathy, raising our voices against discrimination and treating everybody as equals, else we will continue to witness more George Floyds and Mahsa Aminis.

Days to look forward to:

Politicians and the power of social media