Life goes on: Why explaining the war in Ukraine is tiring, but necessary 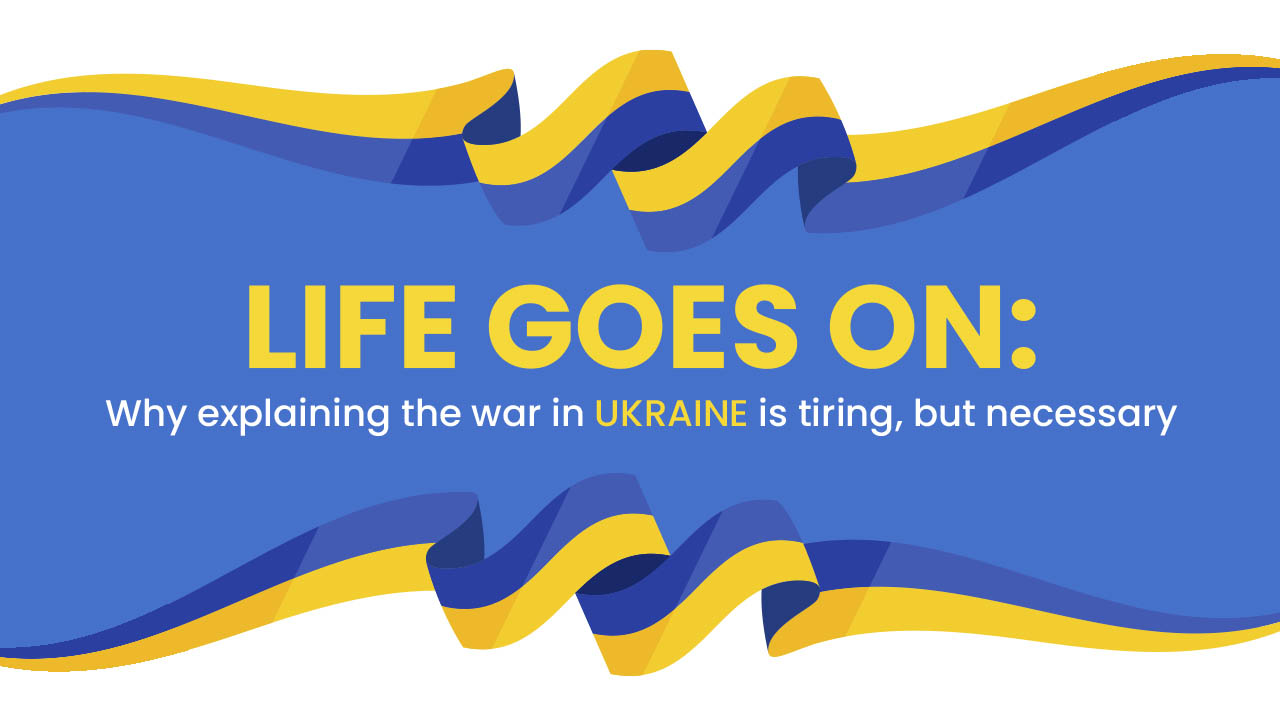 The last few years have been difficult for people around the world. This year seems like a culmination of all bad things that happened during this period. But nobody had a worse experience than Ukrainians. Today they are fighting for their lives and trying to save their home even though they know their lives could end anytime.

Meanwhile, news of the atrocities taking place in Ukraine appear all over the world, every day. From Canada, we can only imagine how hard it can be to live through this. But there are a lot of people who have fled Ukraine since the war began to save their lives and the lives of their family members. Ukrainians who are trying to adjust to different countries around the world or even stay there for a long time receive a lot of questions concerning the situation back home. It seems like a normal thing, as it’s not always possible to understand a real situation from the news, and especially because people from Ukraine can share a new perspective to the overall picture. But going through this personally, I learned that constantly educating people on my home country’s status can not only bring up negative emotions, but harm you mentally as well.

During the first days and even months of war, it was important to make the world see that the conflict is real and Russia is acting as a terrorist state. Hospitals were burnt, children were killed, hundreds of civilians buried in one mass grave. The world recognized it as a genocide of Ukrainian people. For me, this didn’t feel distant at all but rather extremely personal.

Right after the beginning of the full scale war, I appeared on many different news platforms sharing the horrifying events happening in my country. At that time, I didn’t really think it was real; in my head, it was just a nightmare and couldn’t be true, even though I shared the pictures of destroyed buildings and burnt military equipment taken by my friends and family. But the situation was getting worse and I finally understood that when I go back to my home country, nothing will be as it was.

Once I realized that, every person reported dead and every bomb thrown on the country of my childhood, left a huge wound in my heart. All the plans to go back for vacations, to see my family, were ruined. And with Russians throwing bombs on civilian areas, I started doubting if I would ever even see my family again.

As I started getting tired, the world got tired as well. But through the desperation and fear, I realized – if I stop protecting my country rather than my feelings, I lose both as a result.

Every time I see Canadians who show interest in knowing the reality about the occupant war led by Russia, I immediately explain to them what is happening. It is always better to tell the truth than let people wonder and create different versions. It is my destiny as a journalist. But there are also people who can’t keep their emotions inside and grow depressed being far from home. It doesn’t mean that the war hits us differently or someone is more worried. It only means that it influences us differently.

Now it’s more difficult to accept that a lot of young people have left the country, and some of them will never return. For me, it means that I won’t be able to see some friends ever again. Almost all my good friends have left for good to Europe or North America and I can’t judge them. But it’s especially hard to accept the fact that your reality is ruined. Your favourite childhood places don’t exist anymore. Some of the people with whom you spent all your time last year will never be able to talk to you in person again.

This war not only destroyed our economy and our lifestyle, but it also took our normal life forever. There are difficulties when explaining to Westerners what happens in Ukraine, especially when some tend to deny any sort of Russian aggression. But it is essential to show and explain that the Russian federation is an aggressor that won’t hesitate to take of all of Europe if Ukraine doesn’t get the help it needs to protect itself and the whole continent.
Russia Ukraine World News

1
Blindsided by evil
2
Examining the varied responses to the Pandora Papers
3
Lie or die: Russia's use of propaganda
4
Mental health amid the Ukraine and Russia war
5
Ukraine: Heartbroken but unbreakable

The stigma of of psychological disorders

Workers in the trades slowly breaking silence on mental health