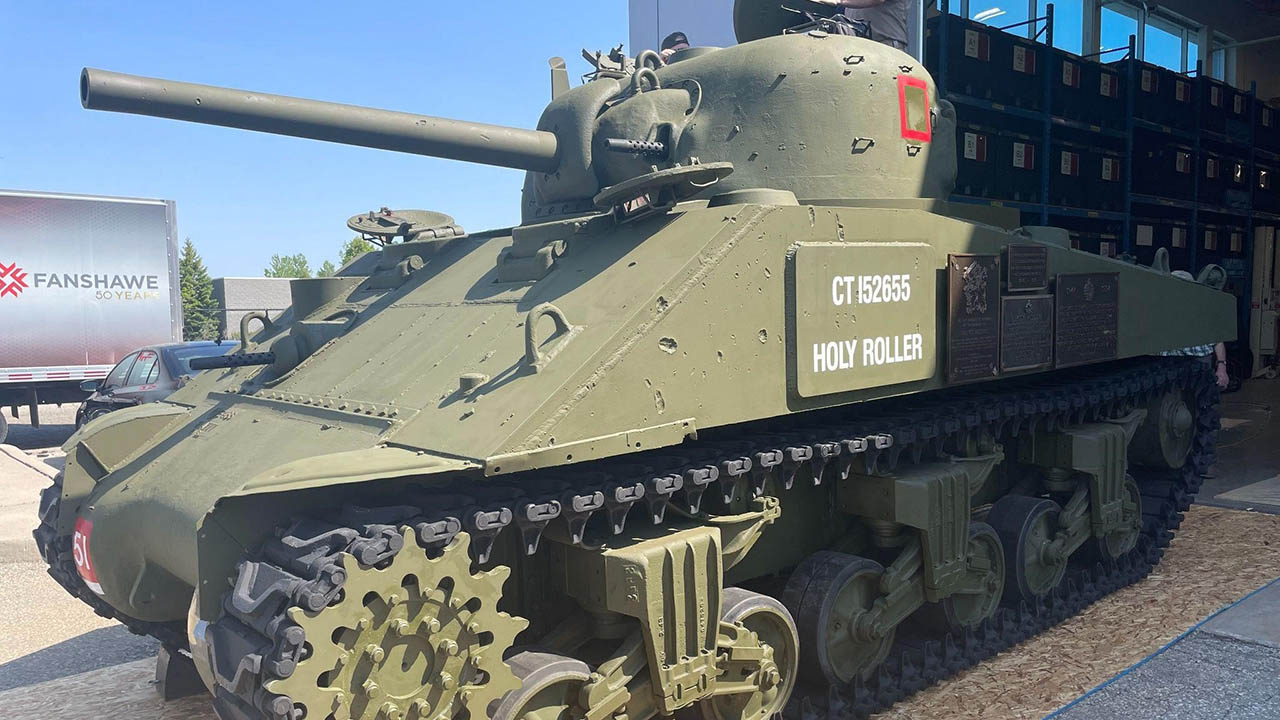 On Monday morning, a crowd gathered at Fanshawe College’s Centre for Applied Transportation Technologies to admire the refurbished Holy Roller. The event was held to prepare the tank to move back to its home at Victoria Park on Tuesday afternoon.

The project was led by the 1st Hussars Association, who teamed up with Fanshawe College and various other companies to make the restoration possible.

“Community collaborations like this help us provide exceptional learning experiences for our students while addressing a community need,” said Peter Devlin, Fanshawe College president. “It’s a great example of what we intend to accomplish as innovation and creativity are reinforced in our program delivery.”

Over 50 staff and students helped with the project, all from various programs. This included welding students from the St. Thomas-Elgin regional campus, Auto Body Truck and Coach students, and Broadcasting students, who captured the entire process.

“We’ve been fortunate to play a role in supporting the restoration and preservation of this historically significant monument,” said Devlin. “It’s a project with added significance because of Fanshawe’s partnership with the Canadian Armed Forces in our establishment of the first-ever military connected campus.”

For military personnel, this tank holds a tremendous amount of significance.

“This project is actually what we termed as ‘The Last Veteran,’” said Lieutenant Colonel Joe Murray, 1st Hussars Association president. “I’ve given a lot of thought to why the veterans are so attached to this tank. They saw this tank in themselves, they saw a survivor. Somebody that has been wounded, went through battles, suffered, and came back and just carried on their life in Canada. I don’t know how many times I’ve seen a veteran walk up to the Holy Roller, touch it, and start to cry because it brings back so many vivid memories for them.”

Some of those involved in the Holy Roller preservation project. CREDIT: KATE OTTERBEIN

Murray said the tank has quickly become a symbol of freedom for those who served the country. The Holy Roller is one of two tanks in the Canadian Army that survived World War II. This is a significant feat because a total of 346 tanks were lost in the war. The fact that it has been restored is an amazing feeling for Murray.

“This is amazing because this means that the soldiers who have served in World War II will never be forgotten. But, it’s also where we read the names of our dead. We read 187 names each June and this June, those names will be read once again. For us, it’s sacred ground.”

Murray said it also represents modern veterans as well. The tank has quickly turned into an international icon for many. Because of that, the Broadcasting students at Fanshawe wanted to capture the process for everyone nationally to see.

“The Holy Roller is something that I didn’t even know about until I started working on the project,” said project director, Emma Wilson. “I think it’s a really big part of Canadian history and a part that we should be restoring and showing off. I just wanted to bring awareness to her and also I want people to know the story of it and how it’s one of only two tanks that fought in D-Day and made it all the way to the end.”

Now the tank prepares to move back to its original home in Victoria Park, with a fresh coat of paint and no more rust. As for the crew, it’s a bittersweet day.

The official move is set to take place on May 31, with the tank being placed back in the park around 12 p.m.
Armed Forces Centre for Applied Transportation Technologies Fanshawe College Victoria Park

1
Ribfest returns
2
Your SDG orientation
3
It's okay to reach out for the ear of a peer
4
End of restrictions: Student Wellness Centre opens for all students
5
Honouring Terry Fox, 41 years after his visit to London