Woodstock Says NO to violence against women and gender inequality 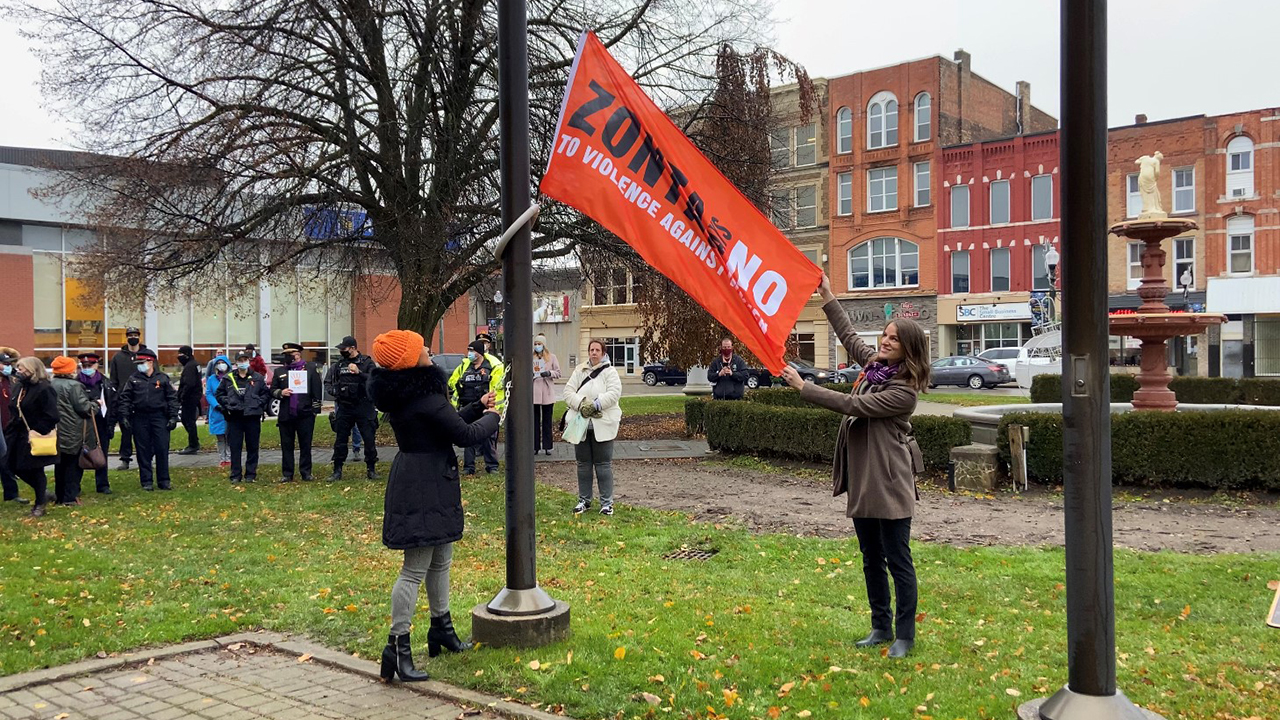 Credit: AMY SIMON
Violence against women continues to persist as one of the most systematic and prevalent human rights abuses in the world.

“Violence against women continues to persist as one of the most dreadful, systematic and prevalent human rights abuses in the world.”

That was the opening statement at the flag raising ceremony at the Woodstock Museum Square for the Zonta Says NO campaign on Nov. 25.

Founded over 100 years ago, Zonta International is a global organization working to achieve a world free of violence against women and girls through services and programs.

“Zonta is located in 63 countries with 6,000 members, and is linked together by our determination to move the status of women,” said Zonta Club of Woodstock President Dr. Maria Odumodu. “Even though we think globally, we act locally.”

For nearly 10 years, Zonta International’s Zonta Says NO campaign has been followed by almost 26,000 members worldwide. Launched in 2012, the campaign brings awareness to women’s rights violations and has united Zonta clubs worldwide in conducting impactful advocacy actions to fight violence against women and gender inequality.

Such advocacy actions include Zonta’s 16 Days of Activism against gender-based violence. Running from Nov. 25 to Dec. 10, below is a list of significant dates being honoured over the two-and-a-half week period:

The Zonta Club of Woodstock and Oxford Domestic Assault Resource Team (DART) have been working in partnership for the past eight years to bring the 16 Days of Activism to fruition.

On Nov. 25, members within the community gathered at the Woodstock Museum Square to honour not only the start of the 16 Days of Activism, but to proclaim that day as the first International Day for the Elimination of Violence Against Women.

“We are bringing awareness and promoting gender equality in the city of Woodstock,” said the Mayor of Woodstock Trevor Birtch. “I ask that you continue to spread the word and share this with others in the community.”

According to Statistics Canada, 67 per cent of people in Canada have known at least one woman who has experienced physical or sexual abuse.

Fanshawe College’s Sexual Violence Prevention Advisor Leah Marshall was also in attendance and highlighted the support the Zonta Club of Woodstock has provided for the Fanshawe Woodstock regional campus.

“Hopefully students know that these services are available to them not only on campus, but in their Woodstock community as well,” said Marshall. “This is a great opportunity for Fanshawe and the community to come together.”

Smith added that “the community has supported our [Zonta] events and they continue to provide guidance and support wherever we may need it.”

The orange flag reading ‘Zonta Says NO’ now blows in the heart of the Woodstock community. President Odumodu concluded the ceremony by saying “men, we are not against you. Nearly all of our members are married to you. But for us to succeed, we need your support.

“Now, more than ever let’s come together as a community to unite and raise our voices to bring awareness of this issue.”
Gender-based Violence Inequality Woodstock

1
Income inequality and working from home