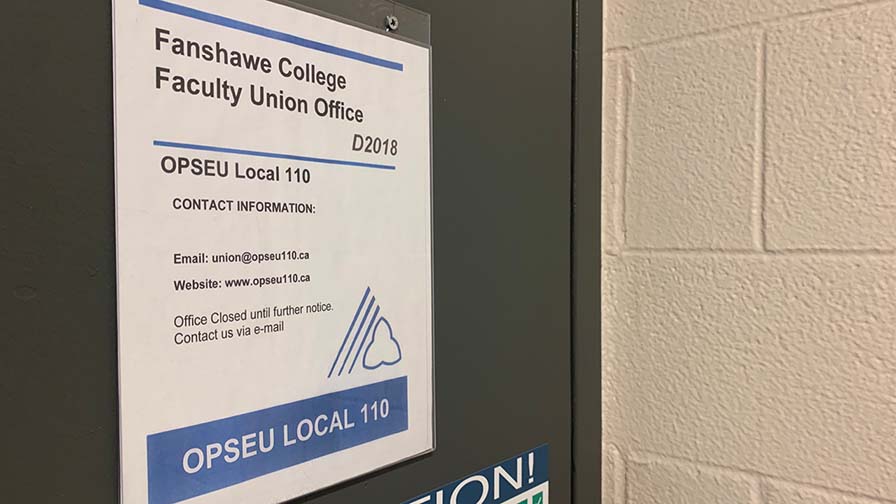 Bargaining between the College Employer Council (CEC) representing the 24 Ontario public colleges and the bargaining team representing the college faculty union has reached a stand-still, after mediator Brian Keller called the union’s demands unrealistic, unlawful and not in good faith. The union bargaining team, known as CAAT-A, has been in talks with the CEC since July 2021, but has yet to accept any of the settlement offers that have been brought forward by the CEC so far. Now, the CEC has requested conciliation in order to continue pushing the process towards conclusion, and to avoid any potential strike mandate.

Darryl Bedford is the president of the Fanshawe faculty union, representing the Ontario Public Service Employees Union (OPSEU) Local 110. He said the recent comments made by Keller missed the point of what the union is fighting for. Specifically, Bedford said the CEC’s settlement offers so far fail to address the issue of part-time staffing. At Fanshawe, 71 per cent of faculty are precariously employed, meaning they are not employed full-time by the college.

“Our team is trying to make progress on issues that have plagued the college system for decades,” said Bedford. “Students know these issues. So for example, students in focus groups and in surveys, they’ll say, ‘do the faculty talk to each other? Do they even know each other?’ And the short answer is, no, faculty have never met each other. Those precariously employed faculty are never paid to come to meetings. They’re usually never invited to meetings. So most faculty have never met each other.”

Contained within the most recent union offer of settlement (Oct. 19, 2021) are demands to end the contracting out of faculty work, calls for an annual one per cent salary increase (across the board until 2023), and increased measures for decolonization.

“Everything that [the] Ontario college faculty put forward are fairly standard things that an academic union would put forward,” said Bedford. “I think that the CEC is basically just trying to exploit a divide.”

That divide, according to Bedford, is between full-time faculty members with a vested interest in the union’s bargaining, versus the 46 per cent of part-time or sessional staff who are not unionized.

In a statement released by the CEC on Nov. 1, Dr. Laurie Rancourt, Chair of the CEC Management Bargaining team called CAAT-A’s demands “not feasible.”

“The CAAT-A team demands touched on more than 50 per cent of the clauses in the collective agreement. Almost all of the proposed changes would fundamentally change the agreement and are not feasible for legislative, fiscal, or operational reasons,” she said.

Rancourt went on to state that the CAAT-A bargaining team had provided little rationale for their tabled demands.

Furthermore, the comments from mediator Keller paint a picture of a bargaining team unwilling to negotiate.

“In my preliminary, and subsequent meeting with the CAAT-A team, I believed I had clearly articulated that almost all that was being sought was unachievable either through direct negotiations with the employer or, if it came to that, in binding arbitration,” said Keller in his report. “I am still firmly of that opinion. Many of the CAAT-A team’s remaining demands are highly aspirational and completely unrealistic. The CAAT-A team claims to recognize that but has showed no willingness to sufficiently moderate its demands to give me any hope that further mediation at this stage could result in a negotiated agreement.”

Bedford, though, was disappointed in the mediator’s summation, to say the least.

“It hurts,” said Bedford. “No doubt about that. It hurts to have a mediator say these things, but the mediator’s not us. At the end of the day, it’s our members who will have to vote.”

As for whether or not the union has any plans to strike, Bedford said that option is a worst case scenario. Bedford also assured students that even if the union does come to a strike vote, the likelihood of a strike actually happening is slim.

“We’ve not called a strike vote. So students can rest assured that right now, nothing is going to happen. Even if the union does call a strike vote, a strong strike vote usually means that there will not be a strike vote because then the CEC will see that we are serious in making progress.

“No vote’s been scheduled,” he added. “That’s not something we’re talking about.”

As for next steps, the CEC has called for conciliation, stating that they are ready to bargain with the CAAT-A team “as soon as they remove from the table the demands the mediator found unlawful or unreasonable.” If that doesn’t happen, the conciliator may write a no work report, but no strike can happen unless the conciliator calls a no board report and 16 days have elapsed. For now, Bedford said the union is uneasy, but hopeful that an agreement can be made.

“This is about the future of the system,” he said. “It’s about who’s going to be teaching you, what are their working conditions like? And how does that translate for the students who [are] either online or in the classroom?”
College Employer Council Darryl Bedford OPSEU