How each major party would stack up as a sexual partner 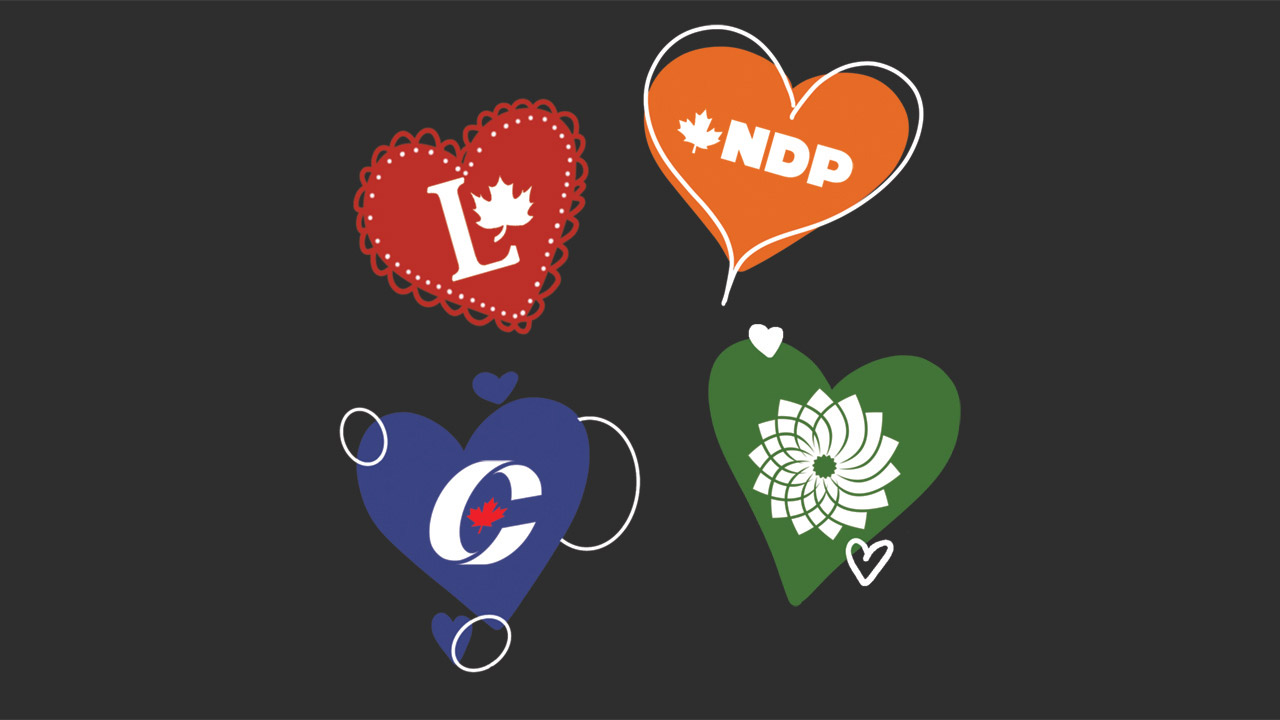 Credit: JESSICA WILSON
Still undecided on who to vote for in the next election? This probably won't help.

The federal election is right around the corner. On Sept. 20, Canadians will hit the polls two years early. Based on recent polls, it’s looking like a tight race between Justin Trudeau’s Liberals, Erin O’Toole’s Conservatives and Jagmeet Singh’s New Democratic Party (NDP). Trailing, but ever-present, are the Greens, led by Annamie Paul, the Bloc Québécois, led by Yves-François Blanchet and the People’s Party of Canada (PPC), led by Maxime Bernier.

Each party has its own set of unique platforms, ranging across the political spectrum. Now, I could break down each party based on policy and promises, but let’s be honest, you never really know a person until you get them in bed. So, in honour of our special Sex issue, I’m breaking down how each party would stack up as a sexual partner. Who are you taking home?

The Liberals are your classic party-next-door type. If you’re into the freaky stuff, they might not be for you. Their favourite position is definitely missionary. It might actually be the only position they know. They’re not exactly fans of challenging the status quo, but that doesn’t mean you won’t leave feeling satisfied. The Liberals love pleasing as many people as possible, and you are no exception. They’ll even cook you breakfast in the morning, full of government-subsidized meat and dairy products. They’ll definitely promise to call you….but they’re not exactly the best at following through, so don’t hold your breath.

If you love instant gratification, this is the party for you. They’ll wine and dine you at a steakhouse first, of course; they want to make you feel special (just don’t expect them to tip your server). But once they get you alone, you can expect a quick, somewhat effective climax that might make you feel good at the time, but will probably leave you wondering, “now what?” They’ll text you “R U up?” every day for the next four years, though, because as far as they’re concerned, they’ve done their job. If you want someone who’s in it for the long haul…. this might not be the party for you.

They’ll try anything once, even if they’re doomed to fail. After going Dutch on a modest meal, the NDPs want to show you a loving, good time. They’ll take it slow, to show you how much they appreciate you (and because fresh, new methods sometimes take a while to get just right). They want you to know they’re open to anything, and they want you to take the lead. Of course, their daring maneuvers and experimental positions might not always be the most effective, and you might not ever find yourself feeling fully satisfied. But the promise of a good time might just be enough to have you calling them back.

For the Greens, a good sex life is all about connecting with the world around you. If you’re into that transcendental, tantric sex stuff, the Greens are ready to give you what you want. They’ll treat you to a vegan picnic before cycling back to your place for a romp in the ethically-sourced hay. They’ll light a few candles (conserve that electricity) and will make sure you both enjoy yourselves. Don’t expect them to give you too much attention in the morning though, as they’re dealing with a lot internally right now. They’re going to need a little “me-time” before committing to you fully.

Ah, the Blocs. Some sexual partners like to play the field and try new things while some sexual partners have a one-track mind. The Blocs represent the latter. A night with them is all about convincing you that French culture is number one. They’ll treat you to dinner at a French restaurant, and you might even be swayed by their charm and accent. But unless you’re from Québéc, they won’t spend much time catering to you. You might still be able to get them into bed, but they won’t stick around for long if they hear you pronounce croissant like “cruss-aunt.”

This party is for those who want nothing more than to be free in their relationships. The PPCs think you should be able to speak your mind, for better or for worse. They’ve got some stringent standards; don’t expect a good time if you weren’t born and raised in Canada. While you might start questioning your own morals, once they’ve taken you on a date to the gun range, the PPCs will rage-do so hard, you won’t even remember there’s an impending climate crisis. And that’s just what they want.

1
No space for Indigenous voices in politics amid Truth and Reconciliation
2
Invoking the Emergencies Act?
3
Should voting be mandatory?
4
The Power of Social Media
5
Canada vs. Brazil: How they choose their representatives