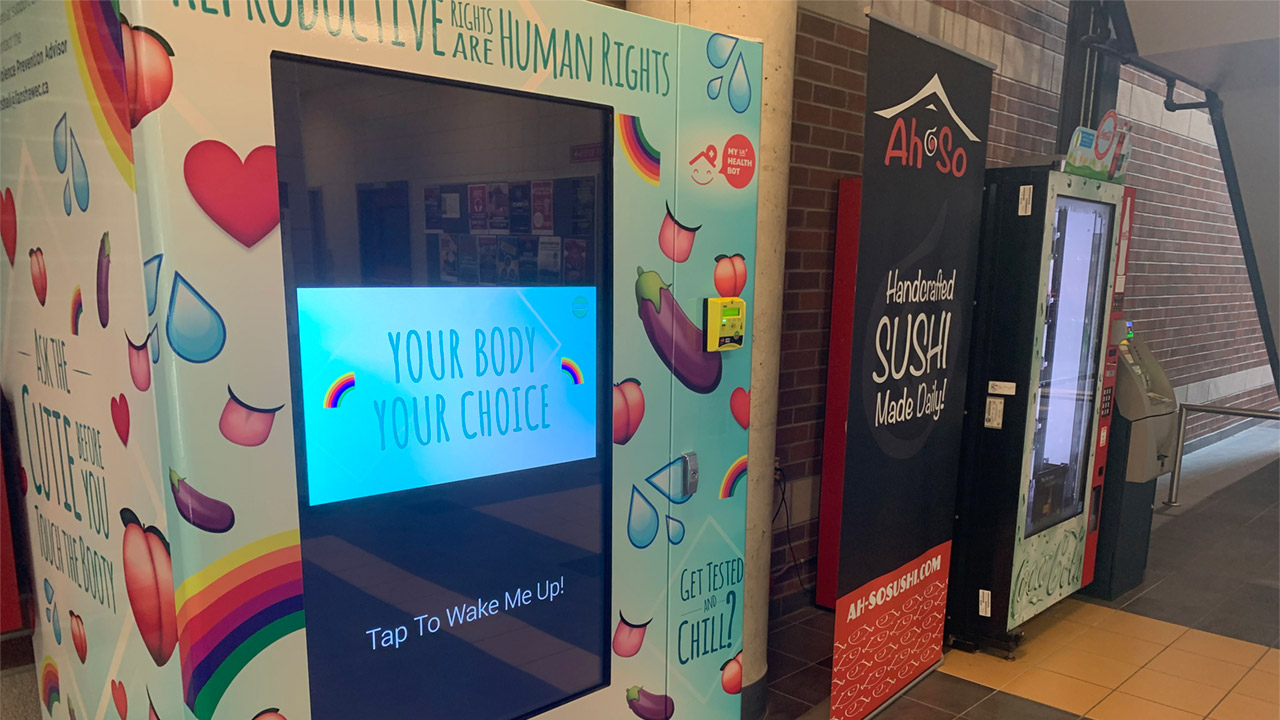 Many of us have been there before: you’re ready to get intimate with a partner when one or both of you realize you don’t have protection. Cue the exasperated and uncomfortable trip to the pharmacy, where many feel nervous or embarrassed having to cash out with a pack of Trojan brand condoms and some KY jelly. The negative stigma towards sex in our society often makes us feel uneasy at being seen purchasing these kind of products, despite the fact that sex is a natural and normal activity that nearly everyone partakes in. This discomfort can sometimes lead to hasty decisions, leading to unprotected sex, unwanted pregnancies, and STIs.

“A big part of having the machines on campus is….not only to de-stigmatize, but also normalize sex and sexual health and that sex isn’t all about what we’ve been taught,” said Marshall. “A lot of our sexual health teachings have really only focused on specific things like reproduction, where we are focusing on pleasure-based sex and the ability for people to choose what’s right for their body and what feels good for them.”

“It was the thought of not only having some of those pharmacy items, but really the focus of the machines being condoms, dental dams, pregnancy tests, as well as reusable menstrual products and so on, on campus.”

The machines will still feature various pharmacy items like laundry detergent, toothpaste and Tylenol. All of the items, including products like Diva Cups, are also available to students at cost, adding an extra benefit to students who may be struggling financially.

“A student could go to a drug store and pay typically around $40 for one of these reusable menstrual cups,” said Marshall. “In the machine, they can access it for $20. So it’s basically a better deal than what we were even getting at cost.”

“My hope is, in the future, to have more of these machines accessible across campus, but this is where we’re starting,” said Marshall.

The machines have been running on campus since March 2021, but limited student traffic due to the pandemic has made it hard to gauge the popularity of the machines. Marshall has heard some positive feedback from students who have been accessing the products inside, though.

“The students that have used them like the ability to access products without having to do a transaction with someone,” she said. “And so there’s also some anonymity in that process….like, we’re breaking down a lot of the stigma around sex and sexual health. And so, any way we can do that, if someone can go to a machine and purchase something, sometimes that’s more comfortable than going in and having that interaction with a person.”

1
You have an STI — now what?
2
Taking care of your sexual health
3
You are not alone: Support for survivors on campus
4
How has talking about sex changed over the years?
5
STI rates higher now than pre-pandemic