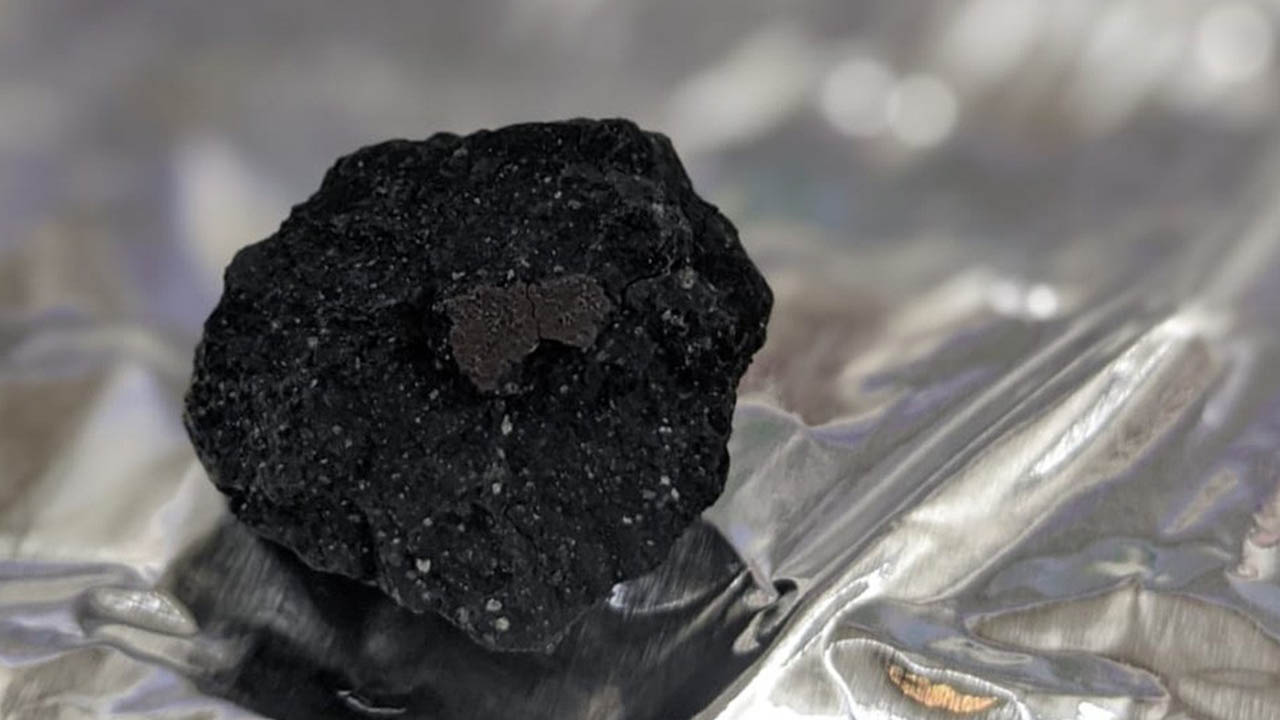 CREDIT: PHOTO BY THE TRUSTEES OF THE NATURAL HISTORY MUSEUM, LONDON
An extremely rare meteorite fell on Earth on Feb. 28, and Western University researchers played a key role on its recovery.

A rare 300 gram meteorite was recovered last week in Winchcombe, U.K. for the first time in 30 years. The meteorite type, which has never fallen in England, is called carbonaceous chondrite and contains amino acids and organics known to be ingredients for life. The discovery was only possible thanks to an international team of fireball trackers that includes Denis Vida, meteor physics postdoctoral associate at Western University.

On Feb. 28, footage of the meteor was captured by the Global Meteor Network (GMN) and U.K. Fireball Alliance. The footage was used to locate the meteorite and determine where it came from in the solar system. GMN, which is coordinated by Vida, operates more than 300 cameras in 22 countries and counts with professional and amateur astronomers. The last time a meteorite has landed and been recovered in the U.K. was in 1991.

Vida was contacted by the coordinator of the U.K. Fireball Alliance, Jim Rowe, one day after the fall. He used Western’s state-of-the-art meteor trajectory software to compute the trajectory of the fireball, and after reviewing the data from the GMN cameras, he identified two U.K.-based cameras that observed the event. The videos suggested that the fireball ended at the height of 27 kilometres, indicating that probably there were meteorite fragments on the ground.

To survive the atmospheric flight, the fragments must slow down to the velocity of 3 km/s, and when this happens, the meteors stop producing light. All of this could be observed on the footage. The meteorites were located immediately after the fall by Dr. Ashley King, from the Natural History Museum, where it is being studied by a scientific team.

The event would be already memorable for the speed and efficiency of the international team, but it turned out to be even more exciting for its rarity. Carbonaceous chondrites are extremely rare, and this one is only the fifth one with a known orbit.

The type of meteorite remained untouched in deep freeze for at least 4.5 billion years, so it can provide answers about life on Earth and the formation of the solar system. These meteorites are also important for other reasons. They are direct evidence for liquid water outside Earth, because they can contain up to 20 per cent water, which is full of organic compounds. Plus, they carry small dust particles older than the sun called presolar grains.

“Imagine you take some eggs, flour, and sugar. You follow a recipe, mix them together and bake them in the oven. Voila, you have a nice cake,” Vida said. “The cake is our solar system. Baked, mixed, changed. In this analogy, carbonaceous chondrites are a chunky mix of eggs, flour and sugar that somehow ended up in the freezer, and we’re using them to figure out how the cake, in this case the solar system, was made.”