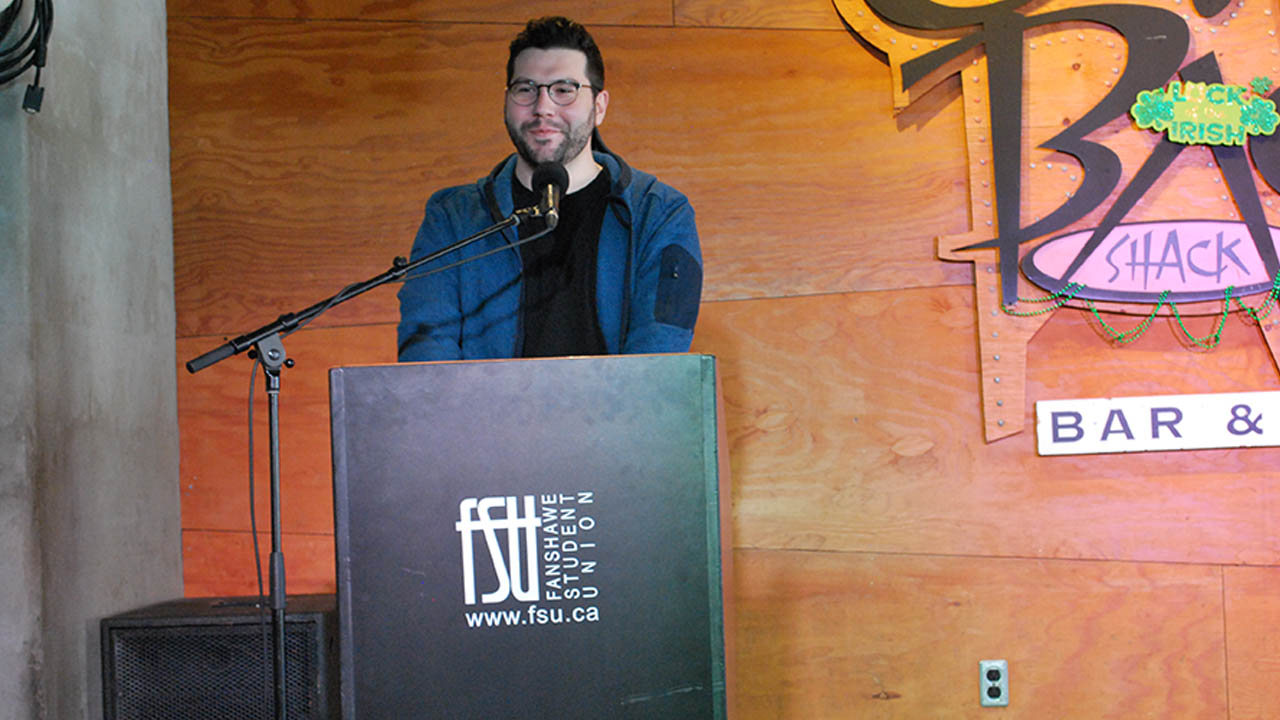 CREDIT: ANGELA MCINNES
Ricardo Souza made his acceptance speech to a socially-distanced crowd in The Out Back Shack on March 17.

Ricardo Souza is the next president of the Fanshawe Student Union (FSU).

The current advocacy and communications coordinator won this year’s election with 994 votes. His opponent, Naznin Akter, had a total of 572.

Souza’s victory was announced, as per FSU tradition, at The Out Back Shack on March 17. He made his acceptance speech to a sparse, socially-distanced crowd of onlookers and cautious St. Patty’s Day celebrants.

“Being here in Canada, being here at Fanshawe, and having the opportunity to raise my voice is everything,” Souza said.

Souza first came to Fanshawe as an international student from Brazil to study human resources. He has background in social communication and linguistics. He told Interrobang he is the first of his family to board a plane, and that this is not how he expected the school year to end.

“One year and a half ago, I was going through the hallways and I saw a picture of candidates for the FSU elections,” he said. “I thought oh my god, these people are so brave, I will never have the guts to put myself out there and run in an election, and here I am. I’m here because Fanshawe and many great leaders here believed in my potential and gave me opportunities and opened doors to me.”

As president, Souza said he will prioritize creating a sense of inclusion among Fanshawe students as they continue to contend with the coronavirus pandemic.

“I think we have lots of challenges next year to migrate all the activities to the new hybrid format. We have to think that there are many students all around the world, and how are we going to keep those students engaged with the same feeling of belonging here at the College,” he said.

Katyayini Thakur, FSU president of 2020/2021, said that she’s seen Fanshawe students show resilience over a challenging year, and has high hopes for Souza.

“He’s done a good job as advocacy and communications coordinator,” Thakur said. “I’m really interested to see all the great ideas that he has and actually be able to implement them once we’re back on campus.”