Coronavirus update: The vaccine is coming 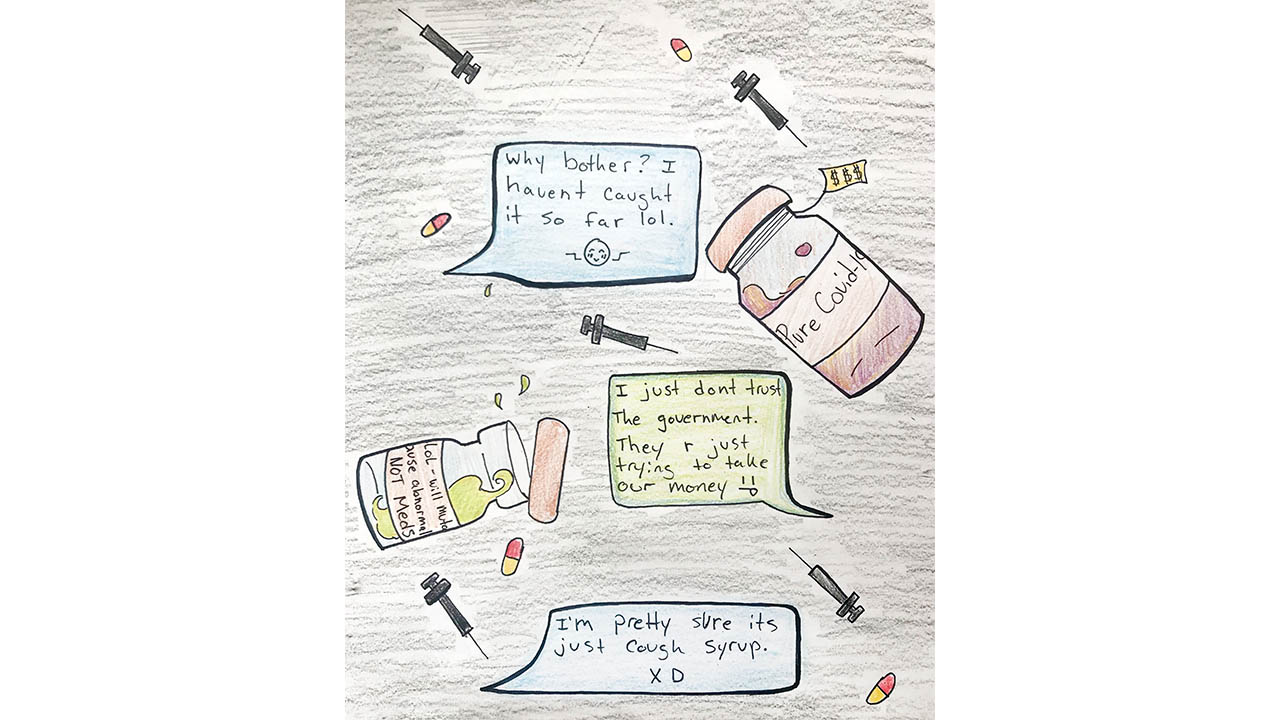 CREDIT: CHEYENNE DOCKSTADER
If all goes well, everyone who wants a vaccine should be able to receive one come fall of next year.

Almost a year ago since the beginning of the worst pandemic in a century, a vaccine has been approved by the federal government.

A billionaire Turkish scientist couple, Ugur Sahin and Ozlem Tureci working in Germany, invented the Pfizer’s COVID-19 vaccine that has proven to be 90 per cent effective, according to an article by Jay Hilotin from the Gulf News. The U.K. is the first country to approve this vaccine and is working towards making it available for frontline healthcare workers, homecare staff and residents as soon as next week, according to nature.com (Dec. 3, 2020).

Canada is not far behind and is in the process of approving the same vaccine, as well as a second vaccine from Moderna. Dr. Supriya Sharma, chief medical adviser, who is responsible for Health Canada’s regulatory branch, has stated that Canada will most likely approve the vaccines around the same time as the U.S. and the European Union, and that can be as early as December 10, 2020, according to The Star.

Here is what you need to know about the Pfizer COVID-19 vaccine:

• The clinical trials assessed immunity development, and according to Sahin, one of the scientists who invented the vaccine, protective immunity builds up within four weeks, but this vaccine can probably allow immunity to happen sooner.

• This is a two-shot vaccine. If you only take one, you will not develop full immunity.

• There are mild side effects that have been noted from the trial, the worst being fatigue and headaches after taking the second shot. Other side effects include pain at the injection site (which is typical for vaccinations) and muscle pain, which is also common. Older adults reported fewer and milder effects according to the scientist couple.

• The vaccination works on older people up to 85 for now as it has not been tested on individuals older than 85. It is 94 per cent effective on people older than 65 according to newscientist.com.

• The vaccine does not protect everyone. Out of the 20,000 people who received the vaccine in trials, eight individuals caught COVID-19, and one was severely ill, according to newscientist.com.

• It is unknown if people will stop catching and passing on the virus once they have taken the vaccine.

• Pregnant women and children under 16 will likely not be eligible for the vaccine at first, as this demographic was not tested in the trials. However, newscientist.com reported that there are ongoing trials for that age group and pregnant women.

So, we know that the vaccine is coming, but who’s getting it? Who is prioritized? Is it going to be mandatory? What happens if you choose not to be vaccinated? Here are answers to the questions on everyone’s mind.

The plan is to have homecare residents receive the first of the doses. Following them are frontline healthcare workers and social care workers. Once the frontline workers are vaccinated, the demographic most at risk are individuals over the age of 80, so they will be the next to receive the vaccine. Then, people aged 75 and over, those clinically vulnerable, then 65 and over, and finally people aged 16 to 64 with underlying health conditions, according to BBC news. The remaining demographics are not on the priority list, but according to CNET, the “normal citizen” should be able to access the vaccine around the spring. The hope is to get everyone vaccinated come fall of next year.

However, not everyone is looking forward to the vaccine. Many are concerned about the side effects and fear taking it because it was made so quickly. According to the Huffington Post, only 39 per cent of Canadians think that the vaccine should be mandatory, while 54 per cent believe it should be taken voluntarily.

To those who do not wish to take the vaccine, you will not be federally obligated to take it. Health Minister Patty Hajdu has made it clear that no vaccine will be mandatory. If you are worried about losing your job, legally in Canada, employers are not allowed to enforce a vaccine on employees, only strongly recommend, according to a legal counsel at HR advisory firm Peninsula, Puneet Tiwari. If employers try to, they would risk wrongful dismissal claims.

Canada’s Chief Public Health Officer, Theresa Tam, has urged Canadians to take the vaccine as it “is the best shot Canadians have at regaining some of what we lost and returning what we cherish.”

The Huffington Post reported that the poll results show that 63 per cent of Canadians are willing to take the vaccine when it comes out. Hopefully this percentage rises and we can take one step closer to returning to the normal days and put this pandemic behind us.
COVID-19 Health Healthcare Pfizer Vaccine

Mind your mind over the holidays