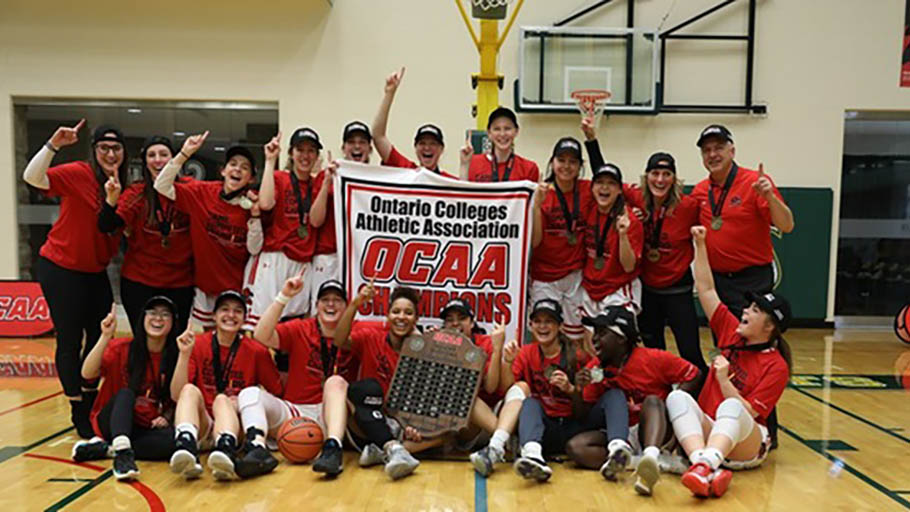 The Falcons’ women’s basketball team have once again earned their place as reigning provincial champions.

On March 8, the Falcons came out victorious in Windsor with a 93-80 win over the St. Clair Saints at the end of the gold medal Ontario Colleges Athletic Association (OCAA) game. It is their second straight time to clinch the OCAA championship.

In the second quarter, the Saints extended their lead by shooting lights out from long range, while Fanshawe’s Chuot Angou (protection, security and investigation) hit three triples of her own. At the break, the Falcons were still down 52-42.

“It was non-stop,” head coach Bill Carriere told Interrobang. “They [St. Clair] had 11 three-pointers in the first half and certainly that was deflating, but you’ve got to give the girls credit. That’s ridiculous, how they saw all those shots go in and the crowds go crazy and they never, never quit. They still believed.”

Fanshawe held their own in the third quarter by stepping up their defense. The team managed to hold St. Clair to only six points on 4.8 per cent shooting.

“That third quarter was absolutely amazing for us, outscoring them 26 to 6, and then continuing on in the fourth quarter to build on that lead and that’s when I knew that it was us that deserved [the win],” Carriere said.

According to a March 8 Fanshawe Athletics media release, Wright had 15 points in the frame on 5/7 from the field and 4/4 from the charity stripe. A three-pointer from Ashleigh LaBlance (police foundations) gave the Falcons momentum to turn their 10 point half time deficit into a 10 point lead going into the final quarter, 68-58.

Second-year guard Jessica Jordan (bachelor of commerce) came through with a strong drive to the rim, resulting in free throws for the Falcons at the opening of the fourth game. St. Clair held strong, but the Falcons held stronger with huge hustle plays by Wright and Warren to maintain possessions. With the Saints having to foul, Fanshawe shot 81 per cent from the free throw line to secure victory.

Both Wright and Angou notched 30 points in the win. As a team, the Falcons shot 47 per cent from the field. Angou was named player of the game and Tournament All-Star along with Warren. Wright was named the Tournament MVP, averaging 26.3 points per game on 55 per cent shooting.

The Falcons will now advance to the Canadian Collegiate Athletic Association (CCAA) National Championships from March 18-21 in Nanaimo, B.C. They will face off with the No.1-ranked Dawson Blues in the quarter-final game on March 19.

“I’m a little concerned about COVID-19, there’s a lot of concern about that, but we leave a week from now and hopefully we’re able to go and number one enjoy it, and number two compete at the highest level. The girls are really looking forward to it so are the coaches,” Carriere said.

He added that he was grateful for the support he and the team have received over the season.

“Thanks for support in the Falcon family,” he said. “There was tremendous amount of support at that game. There was 1,500 people, and I bet 500 were for us — which is kind of cool.”
Athletics Basketball CCAA Fanshawe Falcons OCAA

A history of Canadian women in medicine