A look into residence life 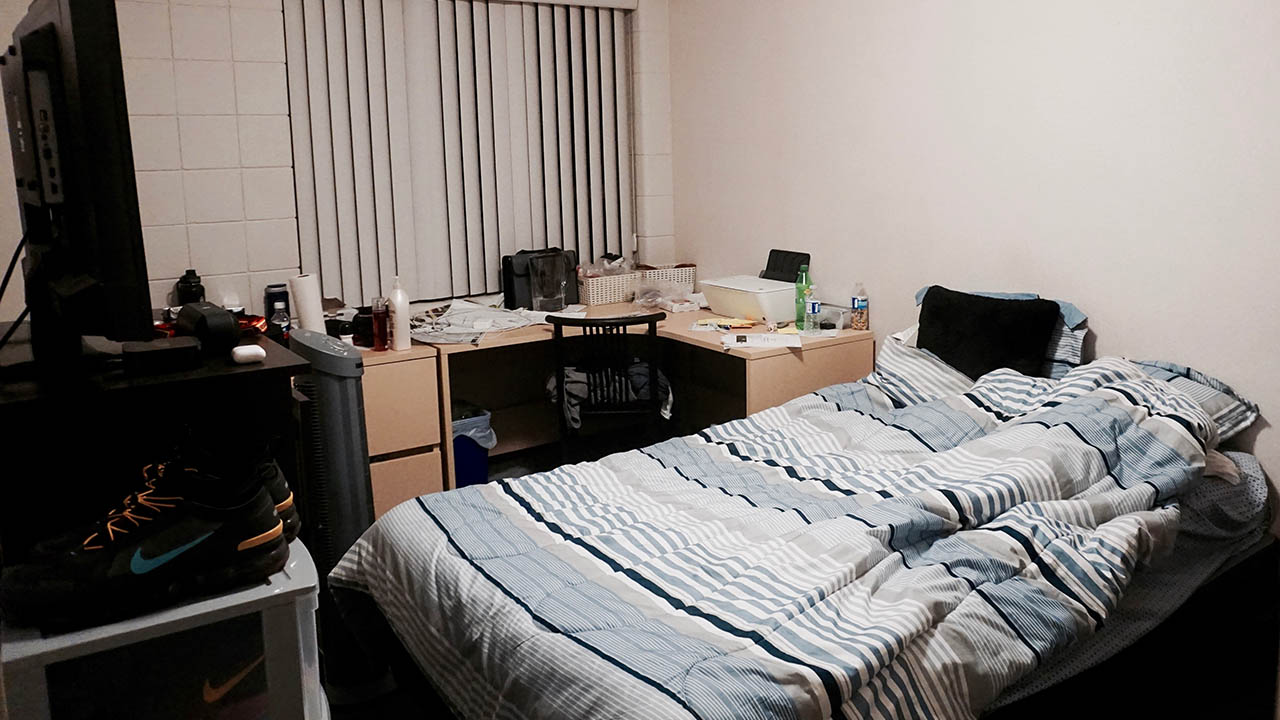 CREDIT: CHEVAUGHN ADAMSON
A glimpse into the realities of living in residence.

The transition from adolescence into adulthood is a confusing, invigorating, scary yet beautiful experience. For many young adults, this transition begins with school. It’s a time in your life where you are learning a great deal about yourself very quickly, especially when living away from home. Quinton Fisher and Chevaughn Adamson’s experiences are no different.

While both are first-year students in the broadcasting: television and film production program, their journeys of self-discovery while living on residence differ greatly.

Fisher lives in a three-story town house residence comprising of six bedrooms, two and a half bathrooms and a full kitchen. Although similar to his family home, Fisher enjoys the change of scenery.

“I was born 15 minutes away from where I lived my entire life. It’s nice to experience something different.”

Unprepared for the routine independence would require, Fisher’s expectation of school varied greatly from his experience.

Realizing the responsibility that comes with independence, Fisher has matured a great deal while living on residence.

“I do everything myself. I get [all] my laundry done, I get all my dishes done, I get all my homework done; living at home I didn’t get any of that done. Since I am alone, I realized it’s not going to get done so I have to be more independent and just do it.”

Fisher believes the space in his residence provides space for his growth. The town houses provide the choice to be alone or social, giving him the feeling of more control over his life. This has helped him discover new parts of himself, specifically his organizational skills.

“I have chores I do; I have set times I do things; I have a schedule now. I didn’t know I would enjoy laundry, it’s relaxing [and] calming. I do get my alone time when I want it but if don’t want alone time I can [always] find something else to do.”

Having friends who live in the traditional residences gives Fisher an appreciation for the peace and privacy of his home.

“You’re not on top of each other as much in the town house. With the traditional [residence], it’s a lot more bickering between roommates because you only have like 200-square-feet. If I am hanging out in the living in a traditional, I can hear [everything].”

Fisher’s best advice for any newcomers to residence is to write things down because your memory will betray you, pack simple and have fun.

In a side by side four-bedroom unit with only a living room to share, there’s not much privacy left for Adamson: a reality of traditional residences.

Having lived away from home playing professional soccer overseas, Adamson is no stranger to living with strangers. After a major sports related injury, Adamson found himself back at home to heal but already he was antsy to create his own world again.

“Everywhere I’ve been I’ve created a world; in England — soccer. In Canada — my family. In Jamaica — my [extended] family. There was always someone.”

Feeling stuck in the in-between was Adamson’s new reality; going back home was his way of redefining it. This provided the space for him learn he needs privacy and autonomy over his time.

“I feel like I knew subconsciously but never acknowledged it; you know you want [to be around] family but you know you need your space. The day I knew I needed that was when I got in my car and drove two hours to Windsor just because.”

Having learned these lessons about himself, Adamson found his transition from home to residence as simpler this time around.

This newly found control over his life has taught Adamson to be more patient and lenient to the world around him especially with his bittersweet experience living on campus.

With the mindset to prepare for the worst and pray for the best, Adamson’s experience with racism on residence was on par with his expectations until a chance encounter in the shared laundry facility.

A student wore a white t-shirt depicting a confederate flag on the front with a blurred image of Emmett Till one the back alongside the names of other victims of hate crimes.

“I’ve met some great people but at the same time [some of] those people turn out to be not so great. Definitely expected some of the racism [but] I didn’t expect a confederate flag.”

Adamson realized the importance of maintaining control in that moment. Instead of reacting to the young man, he chose to do his laundry and leave despite his anger. He saw this as an opportunity to practice his restraint and self-control in hopes it translates into fatherhood.

“In the next five to ten years I’m going to be having kids and I don’t want to be a hothead around [them].

The compact living conditions of a traditional residence tested Adamson throughout the year; however, it helped develop the most authentic version of himself.

“You have to be able to be comfortable looking in the mirror and say ‘I did what I was supposed to do today and tomorrow I’m going to do the same’.”

Like Fisher, Adamson’s best advice for first years is to have fun but most importantly be yourself.

1
The balancing act of managing both school and a job
2
College in COVID
3
Slightly older, slightly smarter, but still slightly naive: Lessons from first semester
4
Affording life as a student is harder than ever
5
(Dis)Orientation

Lost secrets of the cosmos