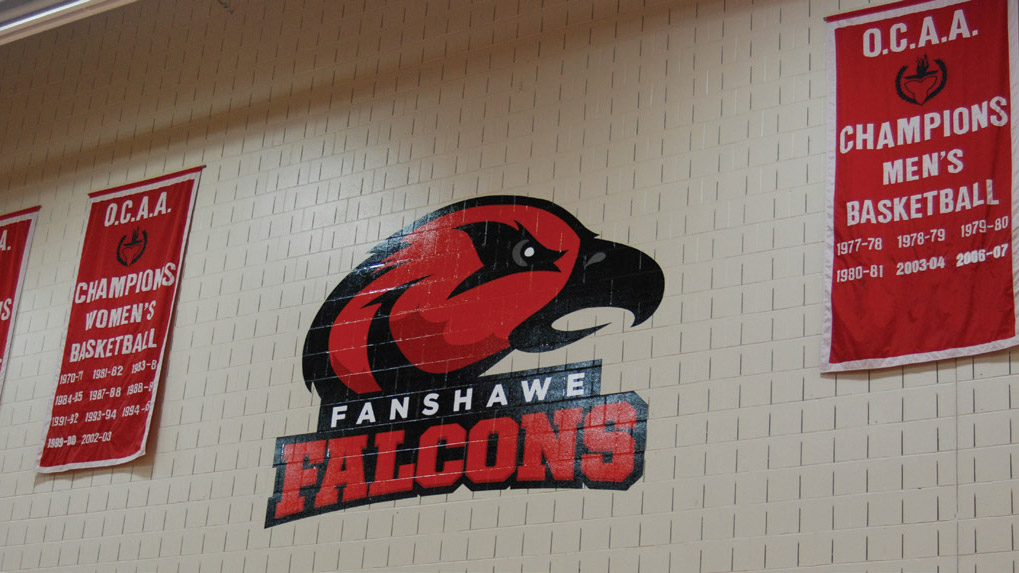 The Falcons’ women’s volleyball team (18-1) locked in their OCAA Provincial Championship spot after winning 3-0 over the Loyalist Lancers (5-14).

Tarea Heshka (bachelor of environmental design and planning) led the Falcons with two left side kills and Katie Stewart (fitness and health promotion) continued to build Fanshawe’s momentum during the first set. After Kim Hardy (occupational therapist and physiotherapist assistant) delivered a service ace to give the Falcons an edge, Fanshawe rose to a 25-12 win.

The Lancers caught up with a 6-2 lead over the Falcons in set two, but Stewart’s hit helped Fanshawe get back on track. Skylar Johnston (nursing) gave Fanshawe a 9-8 advantage and Maya Danis’ (fashion marketing and management) serving kept the team going so they could seal a 25-22 win.

In the third and final set, the Falcons led 7-0. Lauren Reycraft (business- marketing) opened the score, which was followed by Heshka’s kill. Hardy’s stuffed block continued Fanshawe’s lead to a 25-9 final set win. Stewart took the lead by scoring 19 points in the match.

The Falcons are in North Bay, Ont. for the OCAA Women’s Volleyball Provincial Championship from Feb. 27 to 29.

Duo Helen Ngu (office administration) and Maeyen Chua (hospitality and tourism management) earned the OCAA Women’s Doubles Silver Medal. The pair finished in third during the round robin play with a 3-2 record.

Ngu and Chua defeated the Georgian Grizzlies’ badminton team 21-15 and 21-16 in the semi-final round to nab a spot in the Canadian Collegiate Athletic Association (CCAA) Badminton National Championship. In the final round, the duo fell to Humber Hawks’ pair Susanna Quach and Chloe Rowe and received the silver medal for women’s doubles.

Glyvette Etis (hospitality and tourism operations management) earned the OCAA Women’s Single Bronze Medal for the Falcons. She finished in third place during the round robin 3-2 and dropped the semi-final to George Brown Husky and reigning Women’s Singles champion Anh Hoang 12-21 and 13-21. Etis won the OCAA Women’s Singles bronze medal after winning 21-15 and 21-16 in her third match with Georgian’s Jessica Maher.

Chua and Ngu will play in the 2020 CCAA Badminton National Championship, hosted by the University of Toronto Mississauga. The tournament runs from March 4 to 7.

The men’s and women’s curling teams both earned OCAA Bronze Medals. The women’s team placed third in the round robin with a 2-2 record. The Sault Cougars defeated the Falcons 6-5 in the semi-final match. Fanshawe won the bronze medal match 6-4 over the Confederation Thunderhawks.

The men’s curling team placed third in the round robin 3-2. After falling to the Mohawk Mountaineers 4-3 during the semi-final round, the Falcons bounced back and clinched an 8-2 win over the Sault Cougars in the bronze medal match.

Fanshawe’s curlers next head to Portage la Prairie, Man. for the CCAA National Curling Championships from March 11 to 15.

Interrobang wishes all Falcons’ teams the best as they head to Provincials and Nationals. Visit fanshawefalcons. ca for all your latest Fanshawe Athletics updates.

This article was written before the Falcons’ women’s volleyball had their OCAA quarter-final game with the Mohawk Mountaineers on Feb. 27.
Athletics Badminton Curling Fanshawe Falcons OCAA

1
Get involved with Fanshawe Athletics
2
What separates a sport from an activity or game?
3
Fanshawe Falcons to host upcoming baseball showcase
4
Fanshawe badminton brings back a bundle of medals at OCAAs
5
Falcons women's soccer team talks equality after three-peating OCAA Championships

Judgement days: Where do we stand?