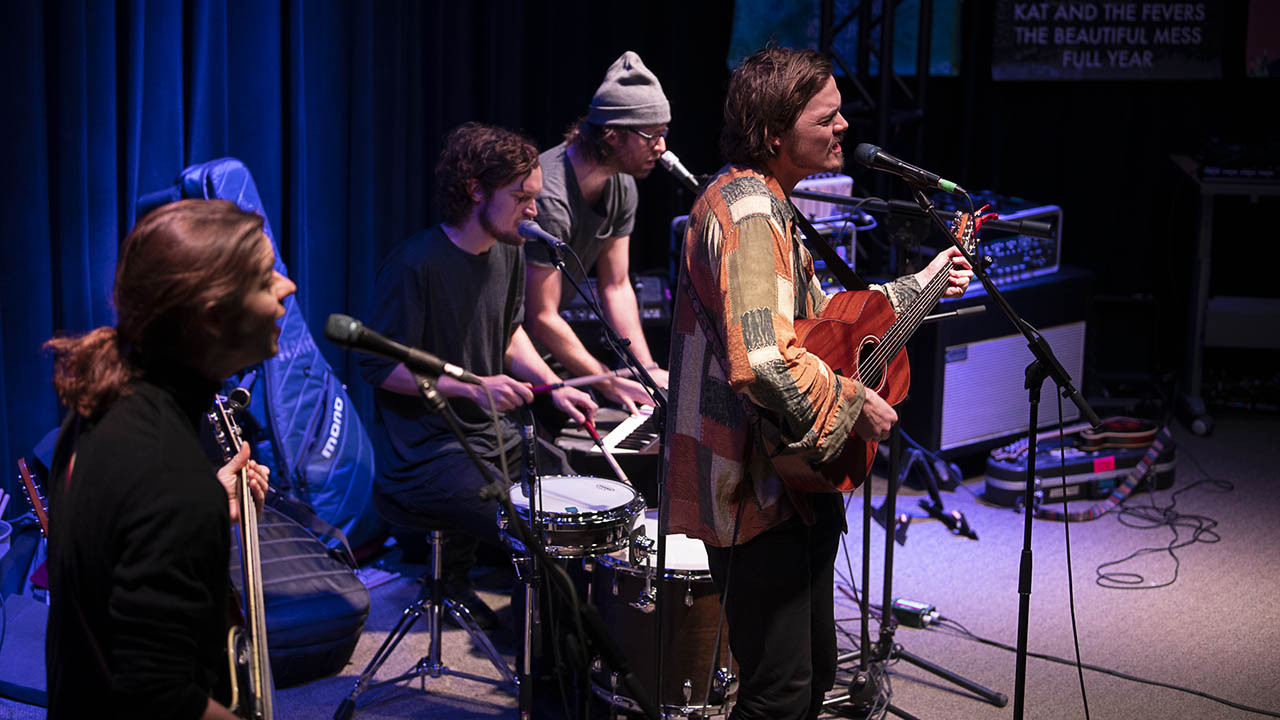 Fanshawe’s music industry arts (MIA) students from both years packed into their lecture hall on Jan. 28. They were all there for an exciting guest lecture by noteworthy indie rock/alt-folk group Half Moon Run.

Devon Portielje, the frontman of the group, is an MIA alum who graduated Fanshawe in 2009, before moving to Montreal to pursue a music career. While there, Portielje made ends meet by working as a dishwasher until meeting the musicians that were to become Half Moon Run through a Craigslist advertisement.

The group’s powerful songwriting and unique production style quickly took Canada by storm, gaining them not just a national audience, but a fan base around the world. This success led to a number of noteworthy opportunities for the group including touring across Europe, Canada, Australia, and sharing the stage with notable acts such as Mumford & Sons, and City and Colour.

Despite their crazy schedule, the group still finds time to stop by Fanshawe whenever they’re in London, in order to visit with current MIA students. Between songs the band chatted with professor Mike Roth about their growth as a band and their experience in the industry, offering advice to students hoping to follow a similar path.

In an interview following the guest lecture, Portielje shared fond memories of the lessons he learned while attending MIA and the impact they had on his career.

“There’s several crucial moments,” Portielje said. “I learned how to use Pro Tools like it was an extension of my body, that was one thing,” he said, going on to acknowledge that the technical side of things wasn’t the only way MIA had affected him.

In fact, it was a piece of business advice that really had the biggest impact on Portielje’s industry outlook. A professor had advised Portielje’s class to say yes to every opportunity that came their way, even if it didn’t seem worthwhile at the time. “That kind of attitude of just saying yes to everything…that’s what we did in the beginning and it was hugely beneficial, just that phrase and it seems obvious looking back it, but it wasn’t obvious back then,” he said.

Portielje also noted that at his time of attending, Roth wasn’t a professor at Fanshawe, but he still managed to have a lasting impact on Portielje through a guest visit.

“He was [a guest] where you [could] go in and meet someone in the industry for 20 minutes…I played him my demos and I was like ‘Am I good enough? Should I try it?’…and he was like ‘Yes, you should.’”

Portielje credits this meeting as a big factor in his success as it gave him the energy to push himself and continue saying yes to every opportunity that came his way.

When asked what the biggest piece of advice was that he had for current students, Portielje said it would be something similar to inspired him during his time in MIA. That is, just to keep opening yourself up to every opportunity you get. “Even if you have to discover through failure where your path is leading, saying yes gets you there faster…when doors open, you’ve got to walk through them.” he said.

Students were left feeling amazed by the group’s musicality, yet inspired to soon find their own path in the industry. There’s no doubt that many of them will also return to Fanshawe one day to give a guest lecture of their own.

To learn more about Half Moon Run and their latest album A Blemish in the Great Light, head to halfmoonrun.com.
Fanshawe alumni Guest Speaker Music Music Industry Arts

Is hatred and discrimination at the centre of politics in India?