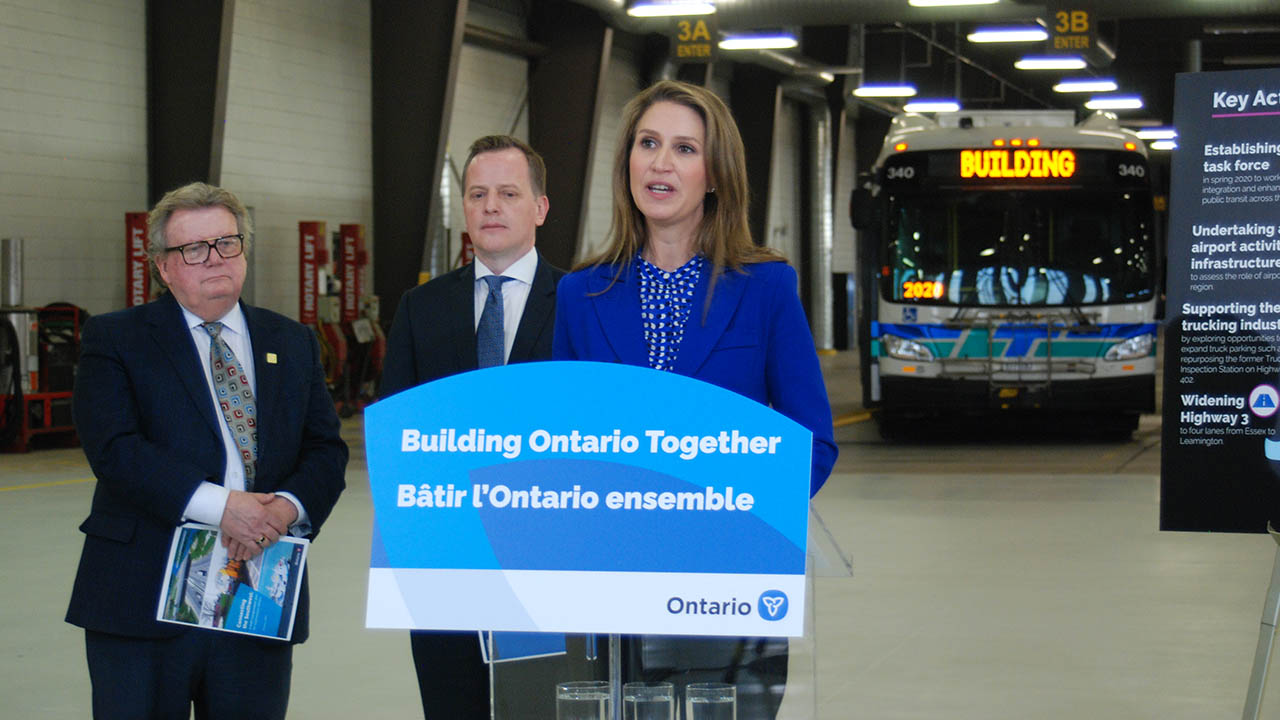 CREDIT: EMILY STEWART
Ontario Minister of Transportation Caroline Mulroney (right) announcing the draft plan of "Connecting the Southwest," a transportation plan for Southwestern Ontario. London Mayor Ed Holder (left) and MPP for Elgin-Middlesex-London Jeff Yurek (centre) were present at the announcement of the plan on Jan. 17.

The Ontario government is seeking feedback for further development on its Southwestern Ontario Transportation plan.

Caroline Mulroney, Ontario’s minister of transportation, announced the draft of the plan called Connecting the Southwest at the London Transit Commission (LTC) bus depot on Jan. 17. The plan includes more than 40 changes across the region.

The Ontario Community Transportation Grant program will fund $14.8 million over a five-year period to 12 municipalities, including Middlesex County, Strathroy-Caradoc, and Norfolk County. The funding aims to increase access to intercommunity bus services by 58 per cent. Ten London transit projects, including bus rapid transit (BRT) will receive over $103 million in provincial funding from the Investing in Canada Infrastructure program.

The government also plans to create a task force where community leaders, transportation experts, Indigenous chiefs, and mayors of Southwestern Ontario will discuss improving accessibility to bus, rail, and other local transit services, coordinating service schedules, and improving integration of transit fare. Other plans include making the 401 a safer highway between London to Tilbury and widening Highway 3 to four lanes from Essex to Leamington.

Mulroney said that the Southwestern Ontario residents are proud of the history, academia, business, and agrifood sectors of their hometowns, and want the next generation to feel the same way.

“They want to raise their kids to be proud of their hometowns,” she said at the conference. “They want to see their kids go to Fanshawe College or the University of Windsor and be able to get a good job in their hometown — not simply pack up their diplomas to start a new life a few hundred kilometres down the 401.”

Mulroney said during a Q&A session after the announcement that students can provide feedback in an online survey if they feel something is missing from the plan.

Lisa Thompson, MPP for Huron- Bruce, called the plan “a win for everyone” and that it will draw students to Fanshawe’s satellite campus in Clinton and Lambton College in Sarnia. Jeff Yurek, MPP for Elgin-Middlesex-London, said that since many students travel from London to St. Thomas for their courses, a bus service connecting the two municipalities will be beneficial.

“It’s only a boom not only for the student to have those opportunities and travel and expand their education, but also for reducing our greenhouse gas emissions here down in Southwestern Ontario.”

Terence Johnson, president of Transport Action Canada, said the organization ran public forums with the Southwestern Ontario Transportation Alliance regarding transportation issues faced by students. Difficulty with getting to campus was a reoccurring concern over several years.

“There’s a lot of students that go to Western [and] Fanshawe who live in St. Thomas and the absence of a bus service on that route means that they have to drive, they have to find parking in London,” he said. “To see a possibility that bus service is going to return is excellent.”

Johnson added that providing more transportation options will connect students to job, internship, and co-op placement opportunities in municipalities like Goderich and Ridgetown and other areas of Southwestern Ontario.

Visit ontario.ca/southwesttransportation to read more about the plan and to participate in the survey until March 17.
Ontario Provincial politics Southwestern Ontario Transportation