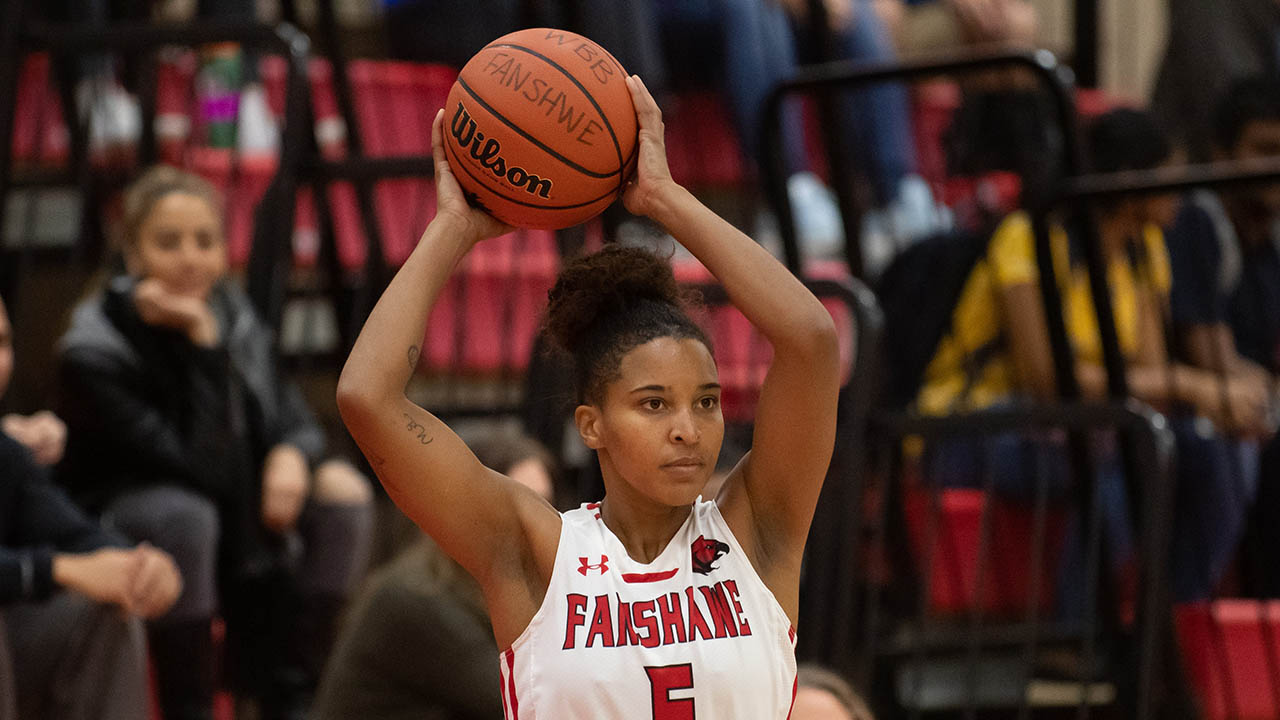 Credit: FANSHAWE ATHLETICS
Mikhaila Wright, the scoring leader for the Fanshawe Falcons women’s basketball team, said the team is aiming for victory during both Provincials and Nationals.

Mikhaila Wright (project management) always had an interest in basketball because her three older brothers played. However, that wasn’t her main focus during her athletic career in high school.

“It’s really individual, track and field,” she said. “With basketball, the team aspect is a lot better. I like being around people and building relationships.”

She spent a year at Carleton University, but became homesick and started studying at Fanshawe College to be close with her family. The move back to London paid off.

Wright said that it was cool knowing she’s the Falcons’ career scoring leader, and said it hadn’t sunk in at the time of the interview. She added Vlasman also happens to be one of her best friends.

“To be in the same category as Ali is an honour because she’s an amazing player,” she said. “It’s really cool.”

Wright also earned two OCAA honours over her time as a Falcon. The Fanshawe Athletics website said she was an OCAA Championship All-Star for 2017/2018 and the West Division Rookie of the Year for 2015/2016.

An Oct. 30 press release from Fanshawe Athletics noted the Falcons’ home opener was also the ONERUN game. Before the women’s basketball team clinched an 84-65 win over the St. Clair Saints on Oct. 30, they wore ONERUN warm-up shirts to honour those affected by cancer and those who have lost their battle.

Wright spoke highly of Carriere, and noted that the women’s basketball team runs one kilometre with her during the ONERUN trek. She said that without their assistant coach, the team would not be the same.

“It’s just amazing to know what she’s gone through and any hardships — like comparing it to basketball — anything we go through, she always tells us to persevere. She never lets us keep our heads down. She’s just an amazing person.”

As of Nov. 5, the women’s basketball team is the top fifth in the Canadian Collegiate Athletic Association (CCAA), according to the CCAA website. During the 2019/2020 season, the Falcons were the top in the nation during their regular season, but Wright said the team realized they were not prepared for Nationals.

“Being fifth, we’ll take it. We’re not really worried about the rankings just because we have a lot to prove still and we have a lot to work on,” she said. “Even if we’re ranked 10th, we still have one goal at the end and that’s to win Provincials, make it to Nationals and win Nationals.”

Wright said the team’s game plan is to aim for Nationals and continue practising and working hard. There are several rookies on the women’s basketball team this year, so the team is building chemistry and working towards victory in Provincials.

“We’ve got a lot of good teams this year that we need to beat and we’re just trying to fine-tune our strengths, find our weaknesses, and just try to prepare.”

Giving back to the scene with Lost in Japan