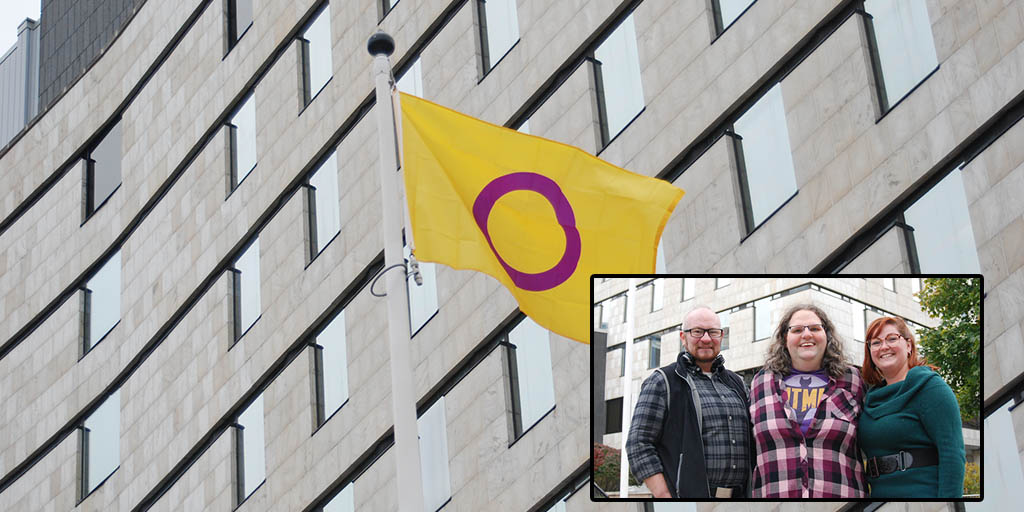 The intersex flag was raised at London City Hall for the first time ever on Oct. 25, ahead of Intersex Awareness Day on Oct. 26. The flag flew until Oct. 27.

Faith Connor, an ally and member of the Intersex London ON.CA group, praised Kearney for her activism during the past five years. Actions include founding the grassroots organization, getting the flag raised at City Hall, hosting a table during the Pride London Festival, speaking with London Health Sciences Centre (LHSC) patient-relations coordinators, and hosting four educational events in 2019, all on a volunteer basis.

“She has established connections which have aided in the creation of resources and a website for information on intersex variations for individuals and their families,” Connor said during her speech in the park. “She has stayed so true to herself, and it has been a pleasure to see her grow and become the confident person she is today.”

Connor and Kearney said during their speeches that intersex is an encompassing term applying to people who are born with sex characteristics, such as chromosomes, anatomy, and hormones, outside of the typical binaries of male or female bodies. There are more than 35 variations, such as androgen insensitivity, Klinefelter syndrome, and Turner syndrome that affect over two per cent of the general population.

“Intersex individuals might use the name of their variation or differences in sex-development instead [of] intersex,” said Kearney. “We need to respect their wishes on them using different terminologies.”

Kearney said that psychologist John Money’s approach to gender, indicating someone could be socially raised into a gender role with consistency and no room for questions, was proven to be incorrect. However, the approach and cosmetic surgery becoming more normalized in the ’50s meant infants and youth born intersex would face hormone replacement therapy (HRT) and surgical treatments in order to fit gender binaries. She said that several intersex people experiencing such treatments have a history of trauma, depression, physical pain, and infertility.

There’s also a connection between the trauma intersex individuals face and homelessness, a lack of support, substance use, and needing workplace and government assistance to cover expenses such as drug costs for HRT and requiring financial support. However, not everyone who is intersex experiences trauma because of supportive medical professionals, communities, and parents.

“For these lucky individuals, I feel it’s important to re-iterate that your experience is valid. Trauma does not make you any more or less as an intersex individual. We need you and we want you as part of the community,” she said. “You need to be yourself. You can be part of a LGBT2Q+ [lesbian, gay, bisexual, trans, Two-Spirit, queer, plus all others] community, or not. You have value as an individual being no matter what.”

During an interview with Interrobang after the event, Kearney said she advocated by herself because there wasn’t a lot of education at the time she started. She later said that in comparison to the U.K., the U.S., and Australia, Canada is about a decade behind or more in terms of intersex awareness. It took five years for a grassroots organization to form and she said that like bamboo, the organization needs about five more years to grow.

“Then I would say about another five years we could go into a non-profit organization. It’s going to take time and money, and determination [and] more people.”

Connor added that education is the best way to support intersex individuals, noting that intersex people are still quite pathologised in the health care system. She said research shows societal acceptance improves quality of life and life expectancy for those who are intersex, and that’s true for any community group.

“Anyone who is treated appropriately and given the ability to thrive does well, so that’s what we’re trying to build for intersex individuals. It’s really just opening up that conversation.”

A support group runs every second Tuesday of the month. To find out more about Intersex London ON. CA, either send an email to intersexlondon.on.ca@nullgmail.com or visit intersexlondon.ca or facebook.com/intersexlondonon.ca.