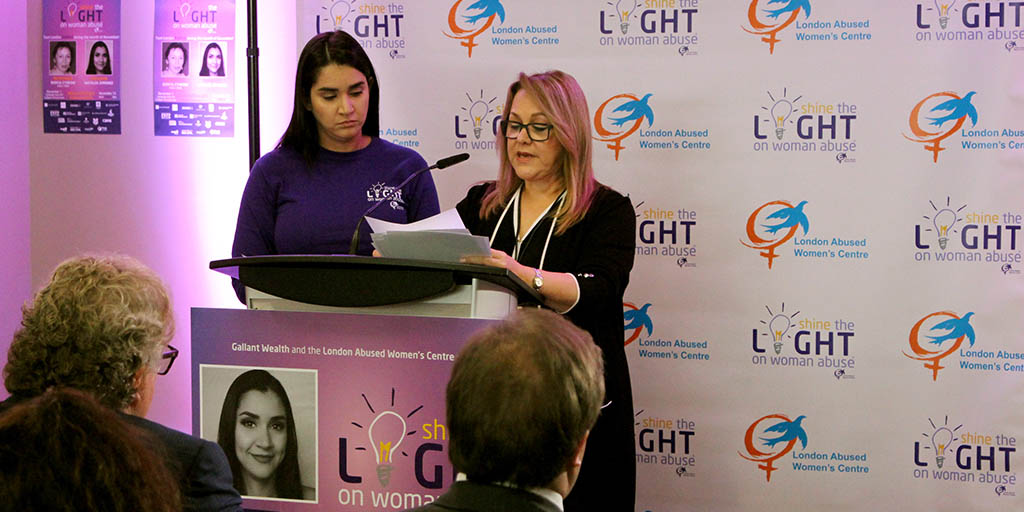 CREDIT: ANGELA MCINNES
Natalia Jimenez, left, tells her story of surviving domestic violence. She is helped by a translator on the right.

The colour represents solidarity with victims of male violence against women, and is worn as part of the London Abused Women’s Centre (LAWC) Shine the Light on Woman Abuse campaign.

This is the 10th year of the campaign which has various London locations, including Fanshawe College, turning their exterior lights purple for the duration of the month. This year honours two women who have been impacted by gender-based violence: Natalia Jimenez, as well as Sonya Cywink from the Whitefish River First Nation.

Jimenez is a survivor of abuse. The 35-year-old Colombian native was choked and stabbed by her former partner, who is currently serving a prison sentence. After the attack, Jimenez came to Canada and utilized the support services provided by LAWC. She is also a Fanshawe College student.

Cywink was killed in 1994. She was 31-years-old and pregnant. Her case has since been unsolved.

Jimenez told her story, with the help of a translator, during the campaign’s media launch event on Oct. 25. Leah Marshall, Fanshawe’s Sexual Violence Prevention Advisor, was among the audience.

“As someone that works on campus supporting many students who are subjected to all forms of gender- based violence, it was really moving today to hear Natalia tell her story in the way that she did, because I think that, much like the name of the campaign, it shines the light on what people in our community are experiencing when it comes to gender-based violence,” Marshall said. “It takes a lot to come forward and share your story in the way that she did.”

Several awareness-raising events will be taking place throughout London and Fanshawe’s London Campus.

On Nov. 1, the campaign will kick off with The Lighting of the Tree of Hope in Victoria Park at 5 p.m. Cywink’s sister, Meggie Cywink, will address attendees, and female Indigenous drumming group Positive Voice will open and close the event with an honour song. Dennis Whiteye, manager of community services at Atlohsa Family Healing Services, will host a sacred fire.

On Nov. 4, Fanshawe College students will take part in the annual Chalk Walk, where they will write information and statistics about violence against women on the sidewalks surrounding Fanshawe’s main campus and residences.

“Shine the Light is a really important campaign to Fanshawe and so we partner with LAWC every year because it actually supports many of our students as well,” said Marshall, who helps to facilitate the activity. “[The Chalk Walk] is done as a way to bring awareness to how big of an issue this is in our community, as well as in the province. It also allows students to find out more about the Shine the Light campaign and how they can get involved and how they can work towards with our community with shifting this culture towards a culture that supports survivors.”

Other events include a Purple Pashmina Sale on Nov. 5 at the London Health Science Centre; a pop-up shop at the Convent Garden Market on Nov. 13, and Wear Purple Day on Nov. 15. For full details on these events and fundraising for LAWC, go to lawc.on.ca/shine2019.

1
Shine the Light campaign details dangers of coercive control
2
You are not alone: Support for survivors on campus
3
Fanshawe's Sexual Awareness Week offers students a sense of safety
4
Taking care of your sexual health

Shades of Our Sisters Installation honours life of Sonya Cywink