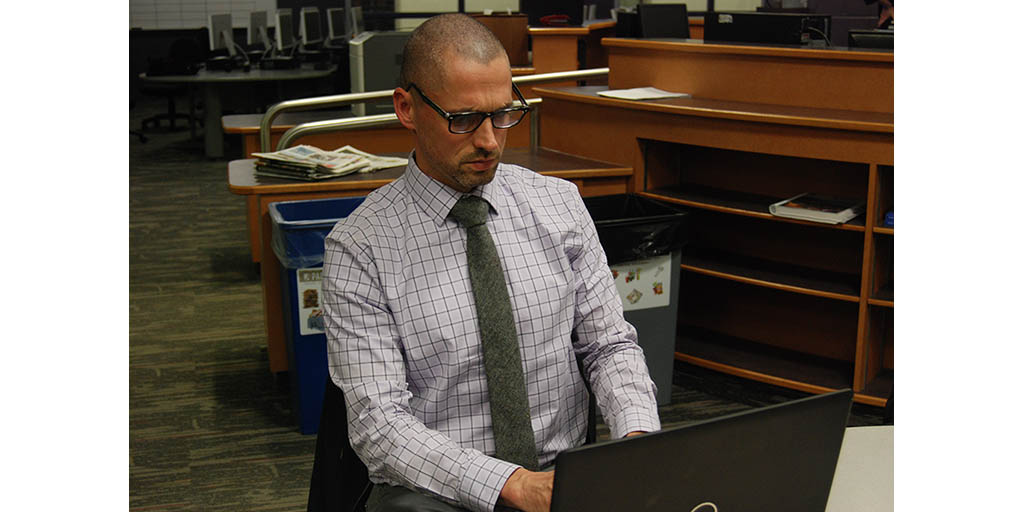 CREDIT: EMILY STEWART
Matt Farrell, an instructor for Fanshawe College's School of Language and Liberal Studies, reflected on the 2019 federal election as seat projections and declarations poured in on the evening of Oct. 21.

The 2019 federal election saw the Liberal Party of Canada form a minority government on Oct. 21.

The Elections Canada website had the preliminary results from election night. The Liberal Party of Canada had the most seats with 157. The Conservative Party of Canada got 121 seats. With 32 seats, the Bloc Québécois got a huge boost, while NDP got 24 seats. The Green Party of Canada has three seats and Jody Wilson-Raybould, who ran for Vancouver Granville as an Independent, got one seat.

Although the Liberals received the most seats in the House of Commons, it is a drop from the 2015 election. Elections Canada’s Report on the 42nd General Election of Oct. 19, 2015, said the Liberals had 184 seats for a majority government. The NDP also saw a drop from 44 seats in 2015, and Green party got one seat in the last election. The Conservatives saw a jump in their number of seats, which rose from 99. The Bloc Québécois’ number of seats rose from 10 seats after the 2015 election.

“In terms of the Liberals, people were clearly not ready for one of the other parties,” Matt Farrell, an instructor for the School of Language and Liberal Studies at Fanshawe College, said. “But they also wanted to send a message to the Liberals that we’re not really — we’re happy with the way that things are going, but we’re going to punish you.”

He said factors like Western Canada’s disdain over the carbon tax, leftwing folks’ disappointment over the pipeline construction, and Quebec’s dislike over how Liberal Leader Justin Trudeau treats federalism in Quebec, came into play.

“Combine those, yeah, people are generally happy about their standard of living,” Farrell said. “They’re OK with the Liberals, but they wanted to send a message that they weren’t completely satisfied and that the Liberals had to work harder.”

When asked about a possible Liberal-NDP coalition as election results were announced, Farrell said that there could be a discussion if there were enough seats for a majority government.

“I think in a fragmented parliament like this where you’ve got four parties with official status,” he said. “I wouldn’t be surprised if the Liberals just made a go of it and tried to go on their own without seeking any coalition input or coalition partners from the NDP or even the Bloc — which would be a bit of a stretch.”

During campaign season, it was a tight race between the Liberals and Conservatives. He said the close race had many factors, including some voters turning towards other parties like NDP or Green, and effective polarization.

“We got two really solidified political factions, a Liberal one and a Conservative one, that don’t like each other very much. Each one has their supporters. Their supporters probably make up a good consistent 30 per cent of the electorate and it’s never — you’re really not going to budge people from that.”

He added that it’s still the case even with the controversies their leaders faced prior to Election Night. Trudeau was subject to the brownface and SNC-Lavalin scandals, and Conservative Leader Andrew Scheer’s controversies include his dual citizenship and the questioning of his status as an insurance broker.

Farrell connected a lower voter turnout for the Liberals to Trudeau’s controversies, as some supporters would have a bad taste in their mouths after that and don’t feel motivated to vote.

“The people that would’ve come out for the Liberals, just stay at home. Maybe they’re not going to vote for the Greens necessarily. They just might stay at home.”

When asked about controversies surrounding Scheer, Farrell said that the same holds true for the Conservatives. There will be people who vote for the party no matter what, but they didn’t churn up enough turnout to form a majority government. He said it’s likely due to Scheer’s leadership.

“There’s a number of high profile Conservatives out there that you could imagine doing better. Rona Ambrose is one. Maybe even Peter MacKay, but I just don’t feel that Andrew Scheer was able to break through and make that connection with voters to the same degree that somebody like [NDP Leader] Jagmeet Singh was.”

Farrell also said that the number of seats for the NDP were around his estimate, and the increase of Bloq Québécois seats was surprising.

1
Should politicians have a life outside of their jobs?
2
Invoking the Emergencies Act?
3
Do students care enough about local elections?
4
The future of federal politics in Canada
5
Canada vs. Brazil: How they choose their representatives

Believe it or not: Annual Psychic Fair comes to campus