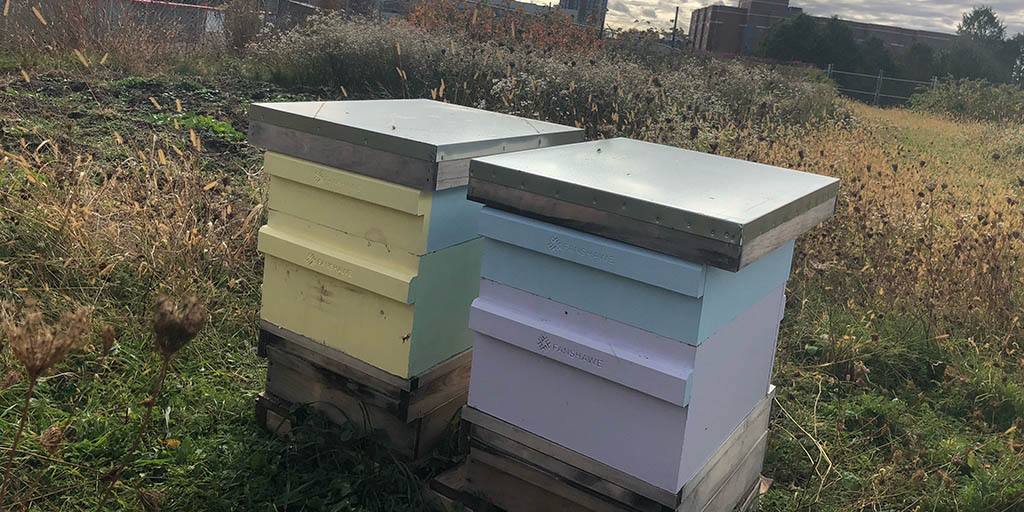 CREDIT: AMY SCOTT
Students and faculty from many different programs have contributed to Fanshawe's beehives, located beside Alumni Field.

From the biotechnology program to the carpentry program, as well as media programs, the new beehives on campus are a full community effort.

While bees have many purposes, one of their most essential is their role in agriculture. According to the Food and Agriculture Organization of the United Nations, three out of four crops depends on a pollinator. Additionally, honey, bees’ main product, is high in antioxidants, and has antibacterial properties. With a globally declining bee population, beekeeping is more important than ever.

Dr. Cheryl Ketola, the coordinator of the College’s biotechnology program, has had an interest in beekeeping and honey for ten years, since visiting an apiary with a coop student at the time.

Two and a half years ago, she started campaigning for beehives on campus.

Ketola had a conversation with fellow faculty member Dr. Michael Jennings, and suggested bringing hives to campus. Jennings has a good relationship with a bee supplier and equipment supplier.

Ketola then approached Rob Murison, the coordinator for the carpentry and renovation technician program, seeking help with the construction of the hives.

“I asked if he could get his students to build some hives for a project, and he needed a project,” said Ketola.

Ketola then had her biotechnology students paint the hives.

Dr. Steve Argall, a faculty member in Applied Science, is the beekeeper.

“Three different scientists are involved: [Argall] a physicist, [Jennings] a chemist, and me, a biologist,” said Ketola.

Argall also came up with this year’s honey’s name: “192 Bees”, the number of bees it takes to make an ounce of honey.

Next year it is planned to be called “1.3 Million”, the amount of money it would cost to make a pound of honey if each bee was paid minimum wage for a seven- day work week.

Ketola says that they plan to name each year’s honey batch after a bee fact.

Students in media post-grad programs have been tasked with the creation of the labels for the honey jars.

Sara Bellaire, a faculty member within the environmental design program has her students designing bee-friendly gardens. The winning design will be planted by the horticulture program on campus.

Ketola says that the environmental aspect of this project is important.

“It’s important that you care about the environment and that you’re willing to put the time into helping it,” said Ketola.

The project will be used for research purposes.

“From a research perspective, it will be neat to analyse our own honey,” said Ketola.

Ketola and her colleagues are now hoping to get “winter coats” for the hives, covers to protect the hives during the winter and ensure the bees are safe.
Bees Biotechnology

Get your game on for the Children's Health Foundation