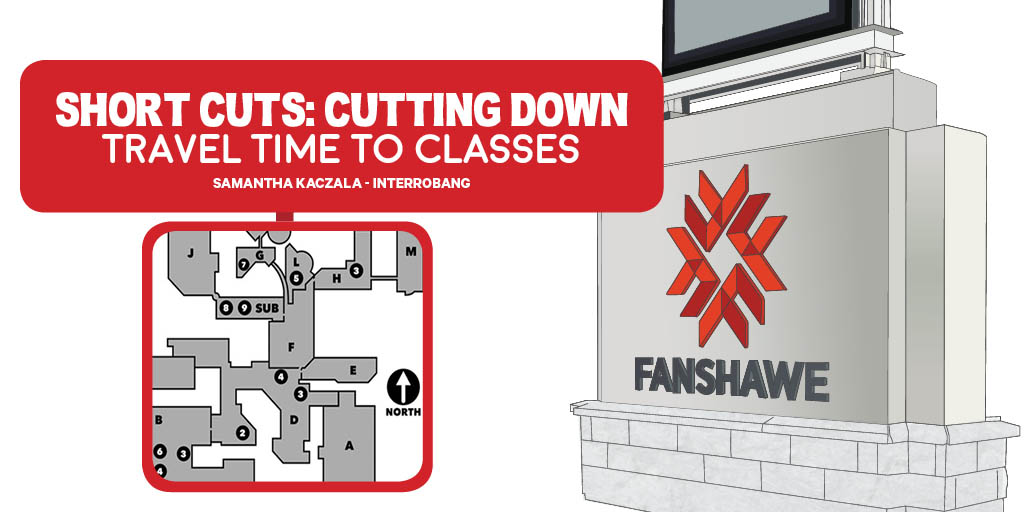 Sometimes it is tedious to traverse the halls of Fanshawe. The weird shapes to some of the buildings makes it longer to get to one end of the College to the other. However, there are a few hidden paths to explore for those who want to get around quicker. Listed below are some short cuts or areas that can cut down travel time between buildings.

Did you know that you can access four buildings from the Lynda R. Rundle garden? There are several entrances to H building alone and it helps cut a diagonal path from H entrance area to the edge of M and into the area of N building. The paths to the residences also have ones that connect to at least two different entrances of G building.

From SC to M

Long route time: Approximately six to seven minutes. Short route time: Approximately four to five minutes. Take the exit of SC building towards the Falcon House residence. Head diagonally towards the right, where a loading bay area is located. At the end of the alcove is a door. Go through it and the one after it to enter the Lynda R. Rundle garden. Either keep to the right path and enter through the H building entrance, or take the left path towards the K building. If you go into H, head left and walk all the way down the hall to reach M building. If going to the left path in the garden, go around the sculpture and continue on the path right behind it. Follow the path to the open area and you should see almost indirectly in front of you an entrance with an ‘M’ beside it.

SECOND FLOOR SHORT CUT FROM B TO A

Long route time: Approximately five to six minutes. Short route time: Approximately one to two minutes. If entering the B building from the bus stops at the front of the school, enter the stairwell with the yellow doors to the right. When at the top, turn right and head down the hall, taking a left when in front of the Lawrence Kinlin School of Business office. Reaching the end of the small hallway, make a right and then enter on the left to the little obscure exit. Walk down the path way until the three way exit above the cafeteria area. Turn right, heading over the bridge way towards D building. Make another right and take the left into a small hallway that brings you directly into A building.

This courtyard is surrounded by several buildings on each side, each with their own entrances. On the north side are about three different doors that will take you into the SUB building, specifically Forwell Hall and the most left entrance in front of The Out Back Shack. Opposite is an entrance to a midway point for D building and towards the east is an entrance to F, closest to where the Library and LEAP Junction lounge are located.

Long route time: Approximately four to five minutes. Short route time: Approximately one to two minutes. Exit out of E building at the doors beside the entrance of the Registrar’s Office (Office of the Registrar E1012). Alternatively, you can exit through the Registrar’s Office itself. Look diagonally to the right across the parking lot. You should be able to see an entrance to the opposite building from there. It is where the green windows and white blocks of the wall stick out uniquely. Cut across the hill in the middle, being aware of cars coming through the area and enter the entrance with a large red ‘M’ beside it to be in the end area of building M. You can also walk a little ways to the left to get into the H building directly from here.

TAKING B TO J

Long route time: Approximately eight to 10 minutes. Short route time: Approximately five to six minutes. Starting from the entrance of the school, take the right corridor down the hall until getting to the locker hallway. Turn right and then go down the little hallway marked by an ‘EXIT’ sign. Walk out into the parking lot and walk diagonally into the big space of the parking lot area. Look for the entrance marked with both a ‘C’ and ‘B’ sign and go through the doors and the next pair of doors towards the right. Go straight down the hall and outside. Find the white entrance doors, a Booster Juice sign may be there. Enter the doors to be in J building.
Fanshawe College Fanshawe students Transitioning to College