GOT GAME brings 3X3 tourney back to London 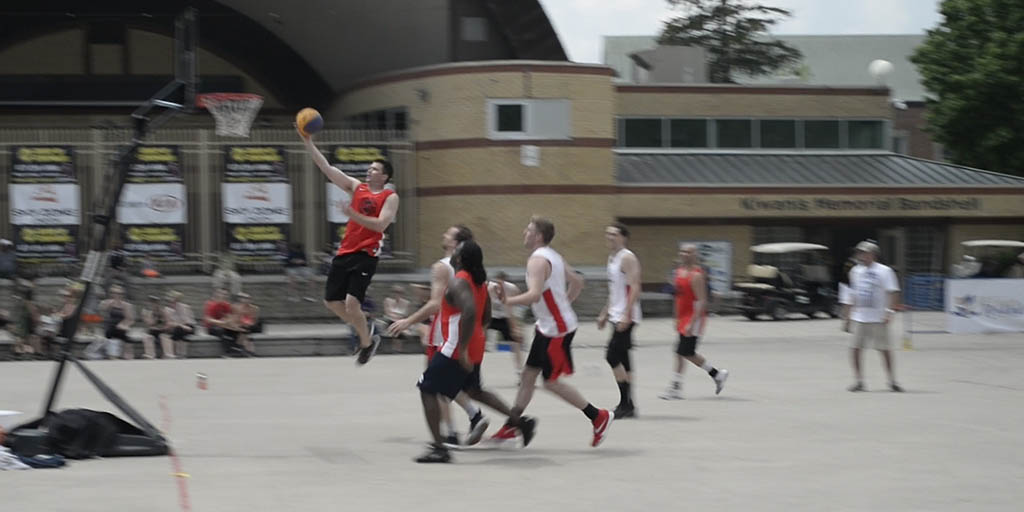 CREDIT: MARLON FRANCIS AND KHAI TRAN
Participants enjoy a Saturday afternoon in Victoria Park at GOT GAME's 3 on 3 basketball tournament.

Years past, London enjoyed the energy and excitement of three on three basketball tournaments held in the core of the city. It has been 10 years since the last major tournament was held here by the monolithic Gus Macker basketball organization. Unfortunately, the city had to say goodbye to the threeday- long tournaments, due to the dwindling number of participants year after year and an unfortunate rise in violent behaviour.

When the Gus Macker left the city, it also left behind a void felt collectively by participants, enthusiasts and leisurely onlookers alike. Last year saw the first attempts in years to bring the culture and flair of the tournaments back to the city, with the GOT GAME Sports Hockey Tournament.

This year the effort continued, with the GOT GAME Street Basketball Tournament, held on May 25 to 26, and the upcoming Hoop Fest Canada event on Aug. 17 to 18.

Both GOT GAME Sports and Hoop Fest Canada are London- based organizations that have been influenced by the history of this city and its relationship to basketball. Hoop Fest may appeal to individuals who would prefer playing at a smaller venue such as the Covent Garden Market, as opposed to GOT GAME’s residency at Victoria Park and surrounding area.

GOT GAME Sports events resemble how other festivals in the city are structured. The basketball tournament, as well as GOT GAME’s hockey tournaments, are both structured in a way that mirrors the set up of long running events like Sunfest, Rib-fest and Town and Country, to name a few.

Visitors and participants attending the May 25 to 26 event ranged from children to mature adults, all looking to have some fun, competition, and of course, to come out of the weekend victorious. Interrobang asked Emma Silvestri, a member of London’s competitive basketball program, The Ramblers, about what she looks forward to the most about the weekend.

“Just getting out with my friends and playing basketball outside,” Silvestri said. “It’s a nice change from playing inside.”

Some in attendance remembered the days past when having three on three basketball tournaments were a much anticipated event.

“It’s been about 15 years, I think, since the Gus Macker, and we used to play right here on the beautiful centre court, and we’re doing it again,” said Jamie Clark, a teacher at Saunders Secondary School. “For me, the best part about it is seeing the kids play. My son’s eight, and he’s playing at a level for eight year olds. Then they’ve got guys and girls, it’s incredible.”

Even participants who were not fortunate enough to reminisce about the ‘good old days’ were able to appreciate the foundation from which GOT GAME’s tournament is rooted.

“I know a lot of people who [played], and they had nothing but good things to say about it. It’s one of those things that I wish I could have played in, but it is what it is,” said participant Dylan Millar.

With the recent success of Canada’s sole professional basketball team, the Toronto Raptors, advancing to their first ever NBA Championship appearance, one could anticipate a rise in enrollment for future three on three basketball tournaments in the city.

This could see Hoop Fest Canada’s second season flourish in August. If the sentiment for Hoop Fest is anything like the reception that GOT GAME’s tournament received, London’s relationship with basketball may rekindle its flame, and inspire a second golden era of memorable tournaments.